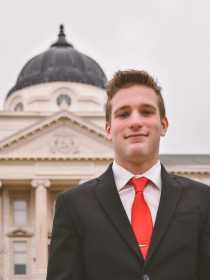 So, in general, I'm interested in running for Student Government executive board because throughout my time in Student Government I've become more aware of the issues in each college. As an executive member, I can communicate these issues with both university officials and the student body as a whole to see how they want to tackle these issues and how we can come up with a solution.

So specifically for my vice president position I want to implement to where senators for each college, they have to do two initiatives within their colleges that they want to come up with and two events that they would like to do with their college. So therefore, it makes students more aware of what Student Government is and see that we care about the students and that we want to hear what they have to say and the issues that they're concerned with.

I want them to know that we're not just a funding organization. That our ultimate goal is to be here for the students and to hear the issues that they have within their colleges or about SEMO in general, and that we're here for them and to take on those issues and to come up with solutions for them.

Obviously, I feel like election voting is going to be down since we're not going to have face-to-face interaction with students on campus. But we're doing the best we can. So I'm reaching out through social media. To anybody that has any concerns or issues that they want to address with [student government] or with SEMO that they would like us to take on to just contact us.

Yes, I think it'll honestly be highly impacted. Just because we're not on campus reminding people to vote. We obviously can't be the UC like reminding people, it all has to be through social media.

Even though I did apply for the vice presidential position, I did also apply to still be a senator because even if I'm not elected as the vice president, I still want to make a change at SEMO, and I could still do that by being a senator from my college.