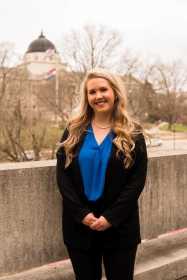 So I feel like this year, I was able to work more with the university officials and with the senators and I really liked being able to kind of see a different side of working in student government. So I really want to hone in on what I've learned and apply it toward working toward more initiatives and stuff like that.

How are you attracting attention to student government elections as a whole?

We're doing a lot of social media posting and we're talking to different students and different organizations that we've talked to just to follow up with them. We're sending out some emails, things like that, just to remind people that voting is Wednesday and Thursday. So pretty

that voting is coming up and we're going to talk to them about how they can vote.

I would say yeah. It will be impacted just because when students are on campus, they're active at the University Center and they kind of know what's going on. I guess a lot of them are not as engaged, but it's harder to get information out to students when all of them are scattered in their different homes and everything.

Is there anything you want students to know?

I would say that our campaign really wants students to know that we want to change what it means to represent them on campus and that we're really here for them and we really want to make a difference on campus. So we want them all to know that they can come to us and communicate with us to see the change on campus.