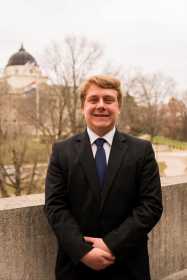 So I have been the treasurer for my fraternity for the last two years and I really love it. I love working with the numbers and working with the people, really. And I believe that I can make an impact on the Student Government as well. And I would like to do so.

I think people should know who I am, who else is with me in office. But just kind of getting that personable approach there is kind of the biggest thing for me. In addition, we would like to work to talk about all the parking issues and all those little individual things I would like to address. I think the biggest thing is just people knowing who we are and what we do. If we could do that, I think it would make an incredible impact on campus.

I want everyone to know that we're a resource available to them. We're elected by the students, and we serve at the pleasure of the students. We're not here to make decisions that hurt people or that people disagree with. We want to listen to students, get feedback from students, and truly represent them. That's the biggest thing, just finding a way to be personable and make them feel like their opinion matters. And that's what our goal is, to represent them.

Since campus has closed, how are you attracting attention to Student Government elections as a whole?

Yeah, it's definitely tough. One thing that I'm trying to do is remain in contact, especially to my friends in Greek life. I'm constantly telling them just to remind them, elections are online, it's not like you have to go anywhere.

So this pandemic is crazy, but honestly might even be an advantage that everyone's gonna be used to doing everything from the computer. When they have that list of assignments to do on April 1 and 2, my goal is to get it so that people have this as one of the things to do. It's going to take five minutes to go out and vote through SELink. But I think we can have great turnout if it's just a simple process like that.

How has the campus closing due to COVID-19 affected your campaign?

So we had a couple in-person events such as tabling events, and of course, the debate that was cancelled. So I think it's negatively affecting us in the sense that we're not allowed to be physically seen. I truly do think those videos, however, were a great asset to be released by Student Government, and I'm glad that was put out there. But it is a struggle. But the other ticket has the same problems as well as to not having that physical appearance. I do think with the power of social media and the way we're utilizing social media, it's kind of turning into an advantage for us because it is the way of the land right now. Rather than shying away from it and being upset by it, we're trying to just take it head on and make the best out of it.

I honestly think it's going to be better. So in the past, we haven't had that great of voter turnout. But I think because of this, because everybody's going to be on their phone, they're at their computers all day.

I think if we can get on their to do list of things, it's going to be more of a priority. Even if it's just taking five minutes away from the homework you've been doing for the last two hours just to kind of take a minute to catch your breath, it's going to be a good way to get away from that, while still being on your computer and still being effective. So do I actually think voters turn out will be better than in years past.

Ultimately, we just want students to go out and vote. Like you're saying, it is going to be difficult to get votes. But in the past, we haven't had a big turnout either. So we just want people to vote regardless if it's for my ticket or for whoever you vote for. I truly believe that whoever is elected has to represent the students and the only way that's possible is if it's voted by the students and we just ask that — everyone please, please vote.