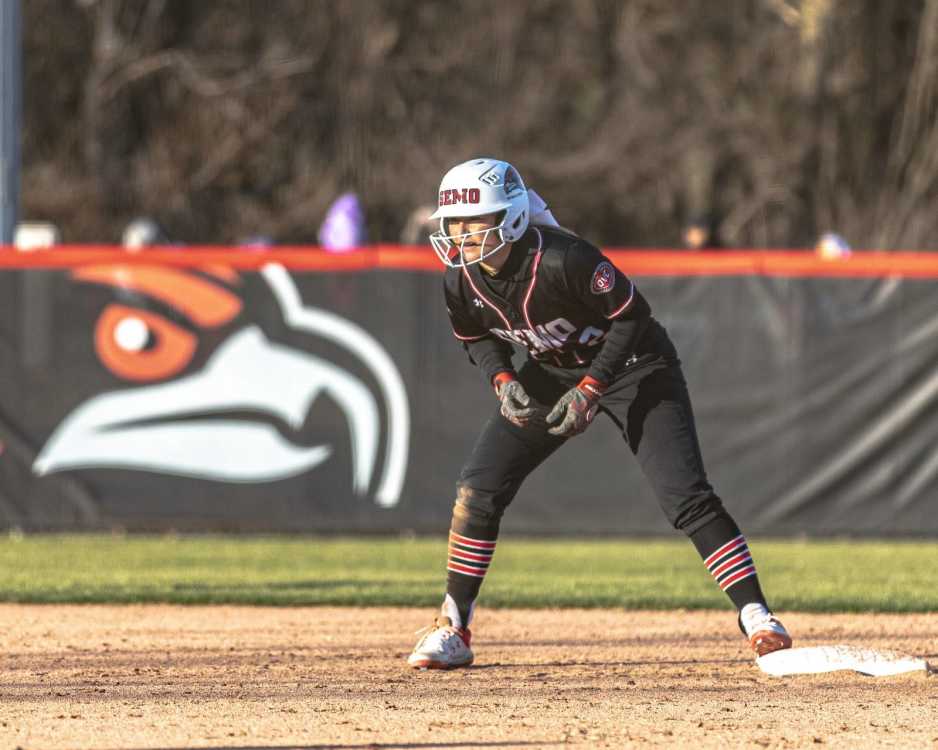 Senior Rachel Anderson watching the pitchers next move on second base in the Redhawks home opener win against UMKC on Feb. 29, 2020.
Photo by Jan Salmon

Senior Rachel Anderson has had one of, if not the best, softball career that has ever been seen at Southeast. However, that career almost never happened.

“I really hated softball; I was burned out on it [in high school],” Anderson said. “My mom and dad convinced me; they told me, ‘Just to try it for one year, and if you hate it, you can quit, and if you love it, you keep going.’ So I committed very late in my senior year, and I loved it, so here I am.”

Southeast was all Anderson’s choice, however.

“When I took my visit to SEMO, I kind of just felt like this is home,” Anderson said. “From day one, I’ve absolutely loved that place. Cape Girardeau will always have a special place in my heart.”

Anderson started off what would have been her senior season at Southeast even stronger than she had in any of her previous seasons.

Through 17 games, Anderson was hitting .480 with three home runs and 15 runs batted in. She also had five triples, a .541 on-base percentage and had not struck out once on the season, one of 11 players in the country to accomplish such a feat.

Then, as Southeast arrived in Florida for a tournament, the COVID-19 pandemic ended the season as quickly as it started.

Anderson said the reality of the situation didn’t really set in during the trip and still doesn’t feel real now.

“It was surreal, it didn’t feel like anything had happened. Some of us were emotional, but for me, I didn’t believe it for a second and it still doesn’t really feel real,” she said.

Anderson is not the only athlete dealing with the cancellation of a season right now, and she said that has helped her a lot in getting through this.

“It’s not like it has just affected me, it’s affected everybody. Which has helped because I know I’m not alone in the way I feel.”

Another thing that has helped is this is not the end of the road for Anderson’s career. Despite this year being her senior season, Anderson is going to take this as a redshirt year and be back for the 2021 season.

“I’m very thankful for the opportunity to get to finish out my career,” Anderson said. “If I didn’t play, I’d be full of regrets.”

The Southeast softball program already has one “W” for the 2021 season with Anderson back in the fold. She is in the top five in almost every major hitting category at Southeast for her career and will likely be the career leader in almost all of them when it’s all said and done.

Anderson has also started every game since she has been at Southeast and now sits at 184 games started. Barring any unforeseen circumstances, she will eclipse the current record of 216 games played and started.

If her career was over today, it would already be one of the greatest ever, but she still has one more year to go. However, Anderson said the records are not why she will be returning.

“Yes, it would mean a lot, and it would be really, really cool to be in those record books, but I’m really coming back because I love the game so much,” Anderson said. “I’m not a big numbers person. I try to stay away from it because I just want to enjoy the game. I just want to make sure we are winning and that I am having fun.”

There are three seniors that have already confirmed they are coming back to Southeast next season. There could potentially be more to return, but in all likelihood, not all the seniors from this year’s squad will be back for next year. Anderson is grateful that, despite not getting the full senior year together, the group won the Ohio Valley Conference Championship her junior year.

“Last year was so magical,” Anderson said. “We were expecting to do that again and it kinda sucks that it got taken away from us. But it meant a lot [to win the OVC Championship] and we’re putting SEMO softball back on the map, and that’s a great feeling to be a part of that.”

Anderson’s career has gone from almost not happening to playing an extra year. It has truly come full circle. Not many players could have a story like that, but then again not many players are Rachel Anderson.