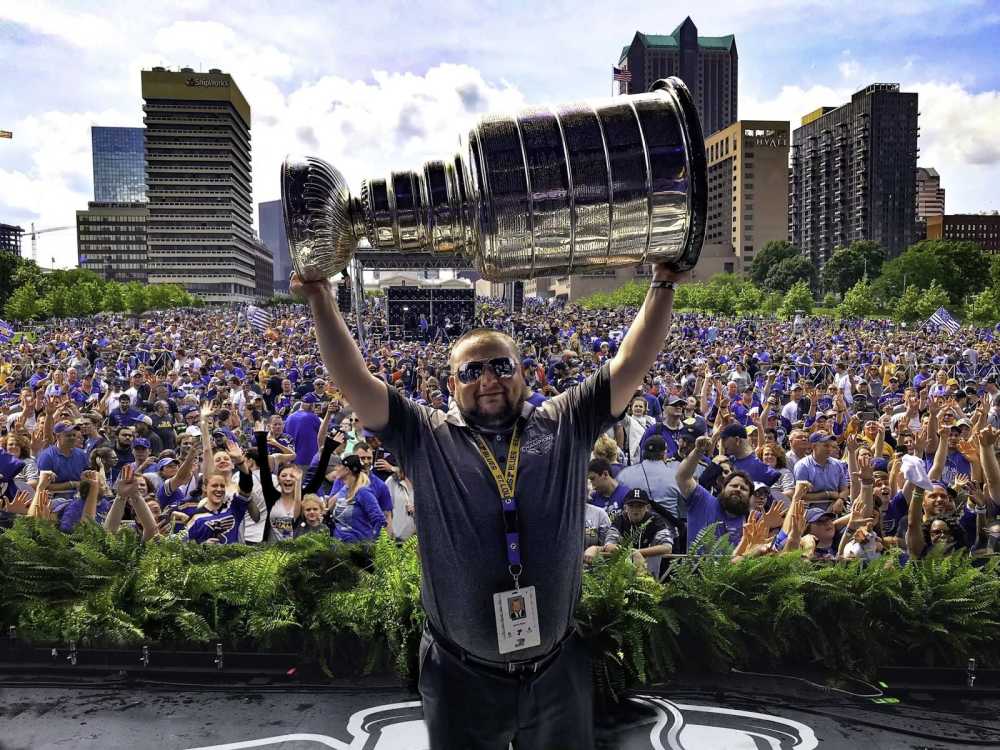 If you have attended a St. Louis Blues or Cardinals game in the past decade, chances are you have heard the organ play during games — and Southeast alumnus Jeremy Boyer was the man leading the “charge.”

Boyer has been with the Blues for thirteen seasons and has worked full-time as the team’s organist ever since, while serving as a part-time organist for the Cardinals for the past eight seasons.

Before getting the gig that would eventually land him a Stanley Cup championship ring and before landing his first organist position with the Memphis Redbirds AAA baseball team in 2007, Boyer was a Redhawk — and an involved one at that.

While earning his Bachelor’s degree in music education, Boyer was the organist/keyboard player for the Southeast baseball team, as well as part of the marching band in the early 2000s. Following his graduation, Boyer took a job working for the Memphis Redbirds before eventually working with the Blues.

“It was super exciting for me [to get the job] — that’s always been my ultimate goal, getting to play for my favorite teams,” the Potosi, Missouri, native said.

June, Boyer was right there every step of the way.

“Every time we scored a goal at home, I got to play after — which was incredible,” Boyer said.

The 2004 Southeast graduate said he’ll get to look back on last season 30 years down the road and remember, “that’s me playing.”

Boyer believes one of the coolest parts of the playoff run was the song “Gloria” by Laura Branigan that became synonymous with the Blues and the city of St. Louis at large following a Blues victory. After the recorded version by Brannigan played and post-game announcements were made, he would get to play the song again for the fans every night on the organ.

The night the Blues finally captured the cup in Boston with a 4-1 Game 7 victory, the team held watch parties at the Enterprise Center and Busch Stadium, packed with fans. Boyer’s organ performance at Enterprise that night was simulcasted into Busch Stadium as well.

“Getting to hear clips of me playing Gloria where everybody is jumping up and down at Busch Stadium, even though it’s playing at Enterprise — it’s pretty cool,” Boyer said.

Whether it was during the teams playoff run or his early days with the organization, Boyer has always tried to stay out of the way when it comes to regularly seeing the players. However, Boyer admitted his mentality on professional courtesy only changed once — when he bumped into “The Great One;” Wayne Gretzky.

“The one time I was like, ‘Oh my gosh, I’m going to stop somebody was [when] I saw Wayne Gretzky,” Boyer recalled.

Boyer said he got his picture with hockey’s all-time leading goal scorer, but other than that does his best to keep to himself.

The soon-to-be 40-year-old has no ambitions of giving up his seat behind the organ.

“I feel like I’m still a pretty young man, I enjoy what I’m doing, and as long as I’m still able and still enjoy it, then yeah, I would love to do it,” Boyer said.

A lifelong musician and sportsfan, his seat behind the organ is not just a ticket to the game.

To keep up with Boyer, you can follow him on Twitter at @JABsMusic, or listen for the organ at any home Blues game.