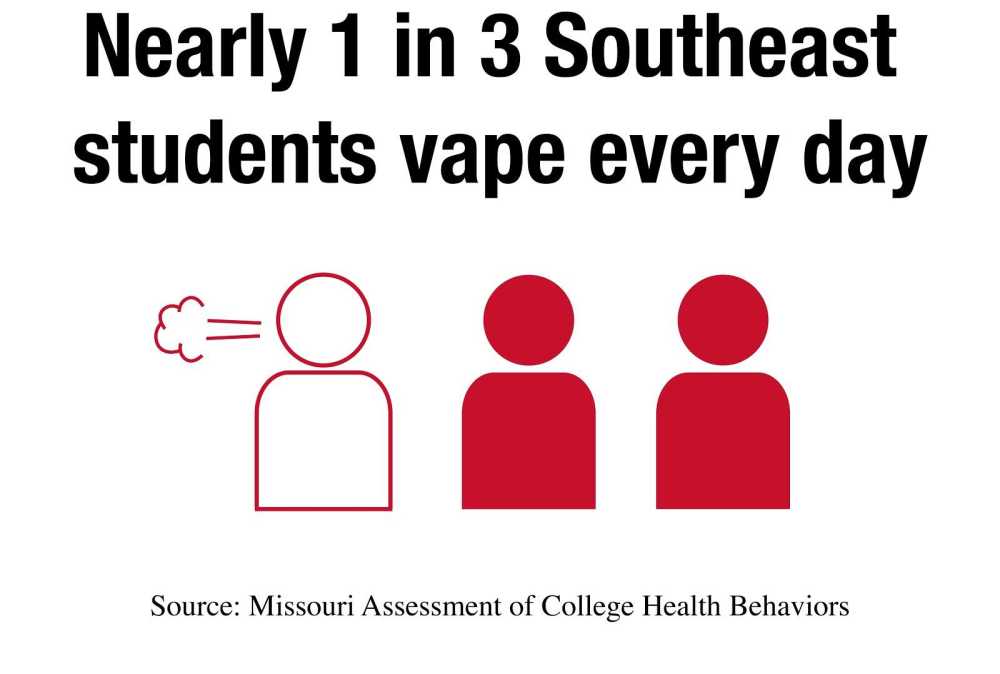 Campus may be closed, but a group of Southeast's health promotion seniors is still working hard to educate their fellow students about unhealthy habits.

Escape the Vape is a student-run campaign raising awareness about the risks associated with vaping, such as exposure to toxic chemicals and known carcinogens as well as the weakening of users' immune systems.

The Missouri Partners in Prevention, a substance abuse prevention and health promotions group, in a recent Missouri Assessment of College Health Behaviours survey found 29% of Southeast students vape every day.

“We decided to [campaign against] vaping because we just thought it was more prevalent to college kids,” health promotion senior Brigid Chura said. “No one's really done a vaping prevention program at Southeast.”

Chura said some students pledged to stop vaping after speaking with the organizers during the campaign's kickoff event at, Southeast’s Health Luau and Prevention Convention on March 11.

The students had plans to engage with students on campus, but after campus closed due to the COVID-19 pandemic, their approach had to change.

“Originally, we were going to paint the wall near Parker, and we were going to chalk and give classroom presentations to freshmen and incoming classes,” health promotion senior Sam Butler said. “Obviously, we can't do that now so we are just using Facebook and Instagram to get our message across.”

Butler said the social media approach is working well. The campaign shares vaping related statistics, research and tips on quitting with over 300 followers on Facebook.

“We’ve really felt how close the SEMO community is as a whole,” Butler said. “We really appreciate all the support we’ve had and we are just ecstatic with how people are reacting to the campaign.”

Jeremy Barnes, professor of health promotion, said the team has coped with the transition well in what was supposed to be its final semester on campus.

“The students have done a wonderful job,” Barnes said. “Obviously, it's been really disappointing that we’ve had to do everything just using social media since spring break, but I'm really proud of the students and the way they have adapted to the changes that have been forced upon us.”

The campaign will continue to reach out and inform students about vaping dangers until the end of the semester. For more information on the dangers of vaping or to participate in the campaign, visit the Escape the Vape SEMO Facebook page, or find them on Instagram at escapethevapeSE.