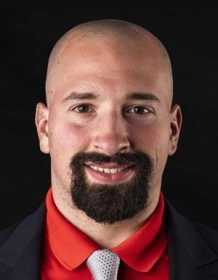 Director of Strength and Conditioning Mark Weisman. Weisman, in his first year at Southeast, previously worked as a Assistant Strength coach at the University of Iowa.
University Photo

As many Americans find themselves confined to their living room couch, Southeast’s Director of Strength and Conditioning Mark Weisman is urging his players to stay in shape while practicing social distancing.

When it comes to the players and their health, Weisman and his team divided up the athletes by the resources around them.

When it comes to in-home workouts and overall communication between his team and the athletes, nothing is mandatory, per NCAA rules.

Weisman sent out a program for each of the three groups: a very small group that has gym access, a group of athletes that have some weights, and the third “creative group.”

When he took the job less than a year ago, Weisman couldn’t have predicted he would find himself telling players to put textbooks in a backpack to use for weights.

“This is where we have to get creative,” Weisman said with a laugh.

“Creative,” as in telling players to fill up duffel bags or backpacks with heavy objects and textbooks as makeshift weights.

“The good news is that our athletes — for the most part — they do too much,” Weisman said. “They are on it, they are awesome, they are hard-working. They are asking us for more work to do.”

A major concern for Weisman is the effect of the layoff on players, not only for their strength but the increased likelihood of sustaining an injury once sports begin again.

Weisman cited evidence from the aftermath of the 2011 NFL Lockout, where players sustained Achilles injuries at a higher rate than normal due to the extended layoff.

“A couple weeks of preseason [to prepare the players] is not enough,” Hewett said of preparing players after a lengthened offseason.

Hewett’s research over the entire league found the Achilles tear injury results in a season-ending injury, and a third of NFL players who tear the tendon never play again. Furthermore, following the extended layoff, the rate of Achilles injuries was five times the normal rate.

Looking forward to the possibility of fall sports starting on time, Weisman warned of a few problems with that notion.

For now, Weisman and his team have multiple contingency plans in place but cannot set anything in stone until they hear of further NCAA guidelines.

Until then, Weisman will continue to communicate with as many athletes as he can, as frequently as possible, to help the athletes stay in condition.