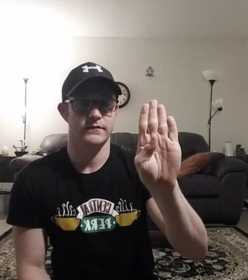 Aaron Bales teaches how to sign the alphabet.
Screenshot from Aaron Bales video

Southeast student Aaron Bales has begun creating and posting videos over a variety of topics for students to enjoy during the pandemic.

Bales, a Mental Health Counseling graduate student, has created videos with different positive topics including mental health tips, a tutorial of a handwashing indicator with paint, trying to create Dalgona coffee and a funny story about microwaving an egg.

“I told one about my macaw parrot that's molting right now, and one of the things I read says you're supposed to feed them boiled eggs,” Bales said. “I tried to cook one in the microwave and you can't, and it exploded all over my kitchen. It blew the door of the microwave wide open.”

Bales started making the videos and posting them on Facebook after reading about creative ways that people have been connecting, such as playing board games through video calls — a way he has stayed in contact with friends.

“I wanted to provide a way that people still have something to do so they can still feel connected and not feel so isolated during this time,” Bales said. “So I thought I could kind of borrow off of that and find a new hobby that we can all kind of learn from each other and get through this together.”

Bales first learned sign language as part of his church youth group when he was 16-years-old.

“I thought it was a really beautiful language since it's all very action-based and you have to convey a lot with your expressions,” Bales said.

He continued to research and teach himself American Sign Language as he grew older.

“I did take the language and culture of the deaf class where they do teach a little bit of Signed Exact English, which borrows a lot of ASL signs,” Bales said.

Since posting these videos, Bales said he has been surprised at the reactions from others.

“It's actually been really encouraging and very positive,” Bales said. “I really didn't expect it to gain the traction that it did.”

He has been inspired to start a YouTube channel where he will post similar videos over a variety of lighthearted topics.

“I do my videos just to kind of be that positive, bright presence so that if you've come home and you've had a rough day or you're really feeling isolated that there's still somebody smiling for you,” Bales said. “Being that encouraging voice to say, ‘Hey, we're going to get through this together, one step at a time, just keep pushing.’”

Bales said he finds it important to find activities others can enjoy during tough times.

“I think whenever everything is so chaotic, I think it's good to have something that you can look forward to,” Bales said. “To still be learning, to find things that you're interested in and stay engaged in. It's hard to find those connections right now and so that's really what I hope that these [videos] offer.”