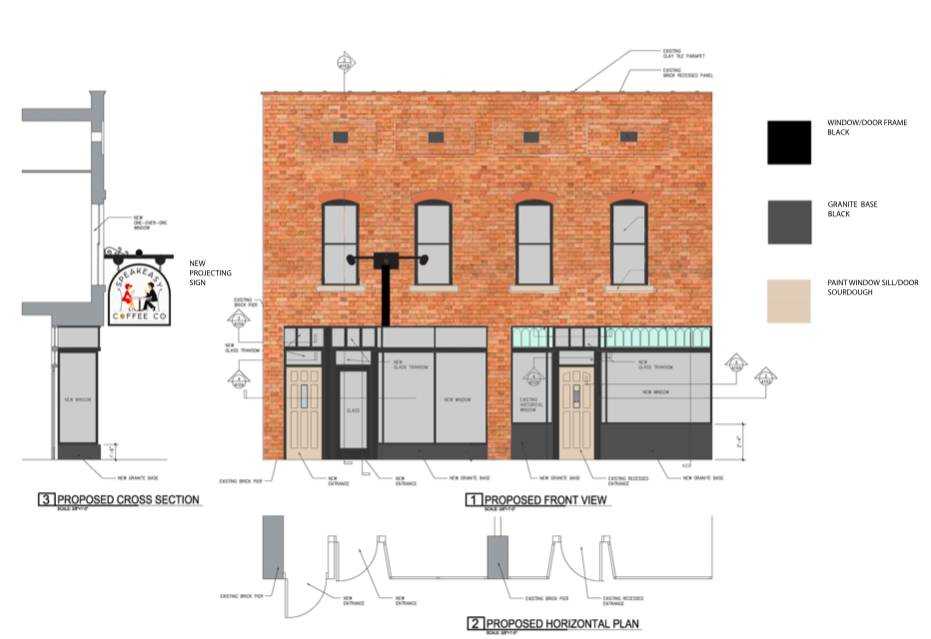 Pending approval from the City of Cape, plans for the Speakeasy Coffee Company storefront are pictured in this rendering by David Douglas Williamson, AIA Architect.
Submitted by Suzanne Hightower.

By next fall, students will have a new spot downtown to grab coffee — a sustainable coffee shop that involves Southeast students in the startup.

Speakeasy Coffee Company, projected to open in August, is intended to blend modern elements with the history of the building at 811 Broadway.

Owner Suzanne Hightower said the previous owners described the location as an underground bar during the prohibition.

A group of students in Southeast’s Managing and Growing New Ventures (ER551) class is involved in the startup of Speakeasy Coffee Company. As part of a class project, students were assigned a local business to partner with throughout the semester. Students Spencer Allender, Clara Synder, Katie McAlister and Tony Nobles are part of the class group, which assisted Hightower in evaluating menus of competing businesses, creating market research surveys, critiquing social media and producing videos for grant applications.

Senior Allender said he became interested in the leadership aspect of forming a business, as well as the real-world experience it gave him.

“I love the culture of coffee shops, and love going and spending time in there,” Allender said. “I thought it would be cool to see the trials and tribulations of a local business owner trying to start something like that.”

Allender said the hands-on experience in planning Speakeasy coffee shop has given him an opportunity to build team leadership skills and create business connections.

While learning remotely, Allender said the group still helps Hightower however they can. While it can be difficult to schedule meetings remotely, he said it’s vital.

“Now is the time more than ever to support small business and do your part to contribute a little bit,” he said. “We’ve been trying our best as a group to coordinate and meet Suzanne’s needs.”

She said the previous owners told her parents would often drop their children off at the Broadway Theatre next door. They would then cross the alleyway between the buildings to visit the basement speakeasy while their children watched movies.

That story inspired the name of the coffee shop, Hightower said, and would tie into the cafe’s vintage atmosphere.

Hightower said she plans to also convert the upstairs and empty main floor spaces into six apartments and possibly create an event center in the remaining space on the main floor.

She said the focus of the restoration business is the environment; her first project, Speakeasy Coffee Company, will feature several sustainable elements.

The building, constructed in the early 1900s, will include several solar panels which will serve the coffee shop and apartments. Speakeasy Coffee will also recycle used coffee grounds to make fertilizer and carry compostable straws, Hightower said.

In addition to sustainability, she said she’d like to provide a place downtown for students to spend time in the evenings. Many coffee shops close around 5 or 6 p.m., Hightower said. Speakeasy is projected to close at 9:30 p.m. on weekdays and 11 p.m. on weekends.

One of the biggest challenges, Hightower explained, is funding. In addition to applying for grants and loans, she must work around bank closures caused by COVID-19. As the building needs to be gutted and undergo roof and window replacements as well, she said the restoration costs would be around three times the purchase amount.

While she anticipates opening both the coffeeshop and apartments in August, some of the challenges she’s experienced could delay opening.

Facebook users can follow updates on the building restoration through Restoreme’s page, where Hightower posts photo and video updates on the coffee shop’s progress.