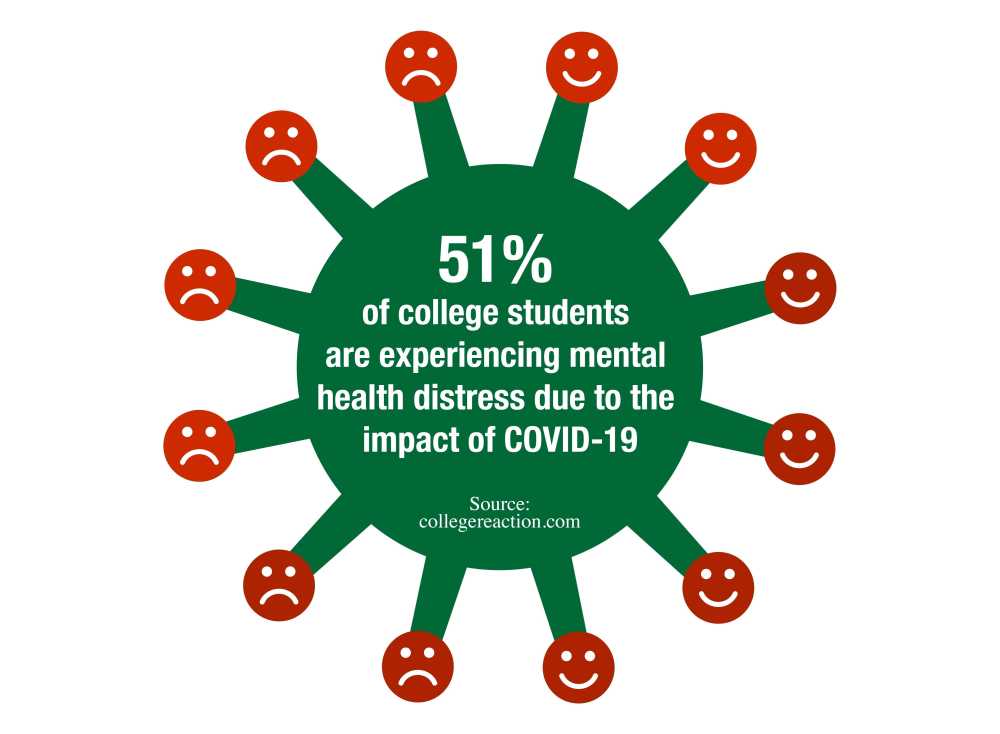 51% of college students are experiencing mental health distress due to the impact of COVID-19, according to a report by collegereaction.com.

Over 77% of those students have described their virtual course experience as worse than in-person classes.

College Reaction, a digital polling and research source that measures student thoughts on “critical issues like politics, tech, social trends, science and health,” according to its website.

For college students, the stress of completing coursework is added to the already growing levels of uncertainty surrounding their health, finances and relationships.

Director of Counseling and Disability Services Janice Ruesler said her office has seen a mixed response from students.

Sophomore theatre major Abram Cutshall said before spring break he felt as if his mental health — specifically the anxiety and depression he deals with — was under control. Since the pandemic began, he’s noticed a drastically changed.

“Not only was this a huge change from the learning aspect, but our entire lives did a whole 180 flip,” Cutshall said. “So it's just really difficult because it's brand new territory that I’ve never been in before, and I'm seeing my own mental health issues manifest in different ways that I've never had to experience before.”

Cutshall said since the university switched to online learning, he has felt a decline in his motivation to do schoolwork and other daily tasks.

“I have a severe lack of motivation to do anything, and that’s a really big struggle because I feel kind of normal, but then I sit down and do my classwork — or try to do it — and my brain just goes completely blank, and I just don't know what to do with it anymore,” Cutshall said.

The Arrow · Southeast students struggle with mental health during pandemic

He said he also finds himself getting tired randomly, which has been a common symptom of his anxiety and depression.

“While I'm here at home I don't feel like I'm having a rough day or anything, but just out of nowhere it'll hit me — I've never had it happen like this before,” Cutshall said.

Senior Alicia Stull said she saw a change in her mental health after she went into quarantine following a sinus infection over spring break.

“I've been isolated for about two and a half weeks now, and I think that's where I saw the biggest drop, just not having anyone to talk to — I couldn't even go see my mom who lives in the same city as me,” Stull said.

Junior Barry Gold said their anxiety felt toward online classes has only increased.

“I can just feel myself losing the progress I had made on my mental health in college,” Gold said. “I already had no motivation to do the online classwork I had for one class this semester but now I have all online classes, and I just don’t want to get anything done which means I procrastinate, then stress more.”

Freshman Jacquelyn Borin said the biggest impact she has seen is when it comes to her classes. Some of her friends have dropped out because of mental health concerns, and she has similar feelings.

“I know a few people that have dropped out already because they just can't handle it,” Borin said. “I feel like this whole online thing has made my mental health worse because everyone's alone, and while you do have your family with you, there's still a social distancing factor.”

Borin takes care of her mother and said having to balance schoolwork and her home life is stressful.

Borin said once the school year is over, she believes her mental health will begin to improve.

“It's just too stressful, but once the whole schoolwork aspect is over, that gets rid of a third of my problems right there,” Borin said. “So I think it'll get better when the school year is over — especially because then the weather will be nicer.”

Students take care of themselves

Each student has their own way of taking care of themselves.

Cutshall said it's important to listen to your own body and know when to take a break.

“If it's a recurring issue, that might be something that you want to look into, because just like if you had headaches that were coming back every single day, that's not something you're just going to push aside,” Cutshall said. “Eventually, you seek medical attention or something like that.”

Stull said reaching out to others has really been helpful when it comes to her mental health.

“I think keeping my schedule has really helped and I talked to my professors about [my mental health], and they were very supportive,” Stull said. “But I think the one thing that's really helped me keep it at bay is talking to my friends every day.”

Stull said the best thing for herself and others is when she is able to open up to others and advises others to do so as well.

“I think the biggest thing is opening up to friends or a family member that you sincerely trust and telling them how you're feeling,” Stull said. “You can go through it alone — but as someone who has done that, I don't recommend it.”

Beck said she already used counseling services prior to the remote switch, but thinks that a lot of students won’t reach out due to their anxiety.

Beck said taking a break from reading news and information about COVID-19 that she sees as negative has impacted her mental health in a positive way.

“I find that spending time with people you love or if you have a pet, that's really helpful. With my dog, if I'm feeling down, I just go to him and I pet him,” Beck said. “I find that just having that support system is very good.”

Ruesler said the most common issue among students her office has seen lately is anxiety, which is expected due to the impact of COVID-19.

Students have the option to get help from Counseling and Disability Services through phone and video calls. The office also posts advice daily on its Facebook page.

“Some students have said telehealth is not for them, which is perfectly fine. We have some students who have tried it and loved it,” Ruesler said.

Ruesler said the process of going remote was difficult at first, but the staff has strongly adjusted.

Ruesler said her office has been contacted by faculty members asking how they can best support their students who are struggling with their mental health.

“The faculty are very interested in making sure that the students are taken care of, especially from a distance,” Ruesler said. “We have had faculty contact us about students that they were concerned about, and then we reach out to those students as well just to touch base and make sure they're doing OK.”

Ruesler said anxiety symptoms can include lack of motivation, not sleeping and getting angry at other people easily. The best thing for students to do is to be aware of their own anxiety symptoms as they vary for each person. She recommends students to contact Counseling and Disability Services.

“I would encourage students, if they're struggling, to reach out to us right now,” Ruesler said. “We have staff who are available to talk with students, to talk with them ongoing if that's what they need.”

Students can contact Counseling and Disability Services by calling (573)986-6191 or by sending an email to ucs@semo.edu.