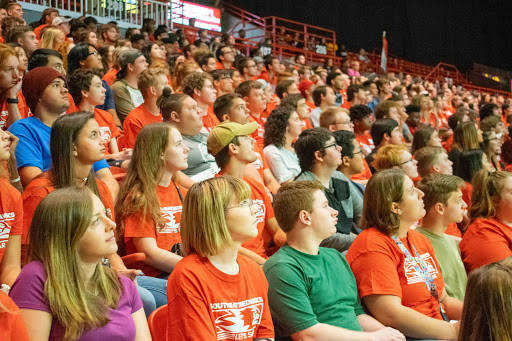 Students look up at convocation in the Show Me Center on August 16.
Photo by Jelani Days

As high school seniors moved to remote learning — a switch made by students across the country — many had to adapt their plans going into college.

Enrollment at four-year colleges could see a 20% decline for the fall semester, according to a national student survey by SimpsonScarborough, a higher education research and marketing company.

Ten percent of high school seniors who planned to attend college have made alternative plans due to COVID-19, according to SimpsonScarborough. This includes taking a gap-year, attending a community college or technical school instead of a four-year university or not attending college at all.

For incoming students who are attending Southeast, many had to change their plans for orientation.

Olivia Wills, a soon-to-be graduate of Mehlville High School, was signed up to attend the orientation on April 25.

“It was kind of upsetting, to be honest, because I was really excited to go to orientation, and I didn't really get to do that,” Wills said.

Students who were scheduled to attend the in-person orientation were sent an email with further details about access to online modules and scheduling for one-on-one advising.

Because many First STEP orientations were canceled, some students don’t have the same opportunities as others.

“The people who have done orientation [already this semester] are really helping us understand what we missed and things that we may need to do to help us,” Wills said.

Wills, an education major, said this opportunity has given her the chance to grow closer to other incoming students who have declared the same major.

“We have a Snapchat group chat for some of the education majors that are incoming and a lot of us are in the same boat, where all of our orientations got canceled,” Wills said. “We all have been talking about how it sucks, but a lot of us are ending up becoming close and might actually meet up and hang out.”

She said they have been encouraged to attend Camp Redhawk so they have a chance to experience the campus before the fall, however, this is something Wills is debating because some have already been canceled.

“It's iffy if anyone wants to actually sign up for the other ones because it's scary that the others will also get canceled,” Wills said.

Madison Bates, an incoming freshman who was able to attend her orientation, is planning to attend Camp Redhawk this summer.

“I didn't have to worry about [missing orientation] but even though I've got my classes, I still feel stressed out because I don't know what's gonna happen or how things are gonna change,” Bates said.

Bates said even though COVID-19 has interrupted her senior year, she doesn’t think it will carry into her college career.

“I am very upset about some of the things that I didn't get to do in high school but I don't want to waste my time in college worrying about that,” Bates said. “I think for a little bit it's going to sting, but once I get to college, and I'm able to do things there, I think it'll change the way I feel.”

How Southeast is preparing for fall 2020

As students prepare to attend school in the fall, the university has begun taking steps to make sure campus is safe.

Deborah Below, vice president for enrollment management and student success, said the emergency operations committee has been working to restart the campus through a slow, measured, gradual approach.

Below said the university plans to hold events called Next STEP for incoming freshmen who didn’t get the full experience from First STEP.

“Our hope is to bring families here face-to-face but to do it in a very controlled environment,” Below said. “We won't have as many students, they may not be able to bring as many guests and we probably won't move them around campus like we do now. So that we can follow those social distancing guidelines that were expected to follow and need to follow.”

It is unclear how many students will return in the fall semester. Below said she thinks it will be a smaller number than this past year, but it is hard to predict enrollment numbers until the semester begins.

“Many students are saying they're just kind of waiting to see and this includes currently enrolled students,” Below said.

The incoming freshman class who weren’t able to attend a First STEP received notifications about being pre-registered in classes, which is normal for new students. They were then given directions to schedule a meeting with one of Southeast’s academic advisors.

Below also said the university is working on a virtual content option which she thinks might be more beneficial for some students.

“Sometimes, when you're sitting in an auditorium and somebody is talking, you can zone out and think, ‘Oh, I missed that and I wish I could hear it again,’” Below said. “So as we put this content out there and we develop recordings and videos, they'll be able to consume it in a time that's convenient for them, but we're trying to make sure all of that same content will be available.”

She said the university hopes to have the online content available in June, giving students time before Next STEP is held.

Another important step when students enter college is convocation, something Below believes will also be different this year.

“My guess is that the university won't be able to hold a large new student convocation in the Show Me Center,” Below said. “But we are spending time talking about how we can create smaller events and make sure that we go to our students where they are.”

The opening week committee will be used as it has in the past years by preparing for opening week, however many of their voices will be heard and sought out.

“They've learned how to socialize in this remote environment and so we're going to try to learn from our students so that we can create the optimal experience for them come fall,” Below said.

She said the positive perspectives are what keep the students, faculty and staff moving forward.

“We want our incoming freshmen class and we want our continuing students to have an extraordinary fall semester,” Below said. “You get this one opportunity to go through college and so we want it to be one that is very enjoyable, memorable and transformative. And so we'll continue to work toward that.”