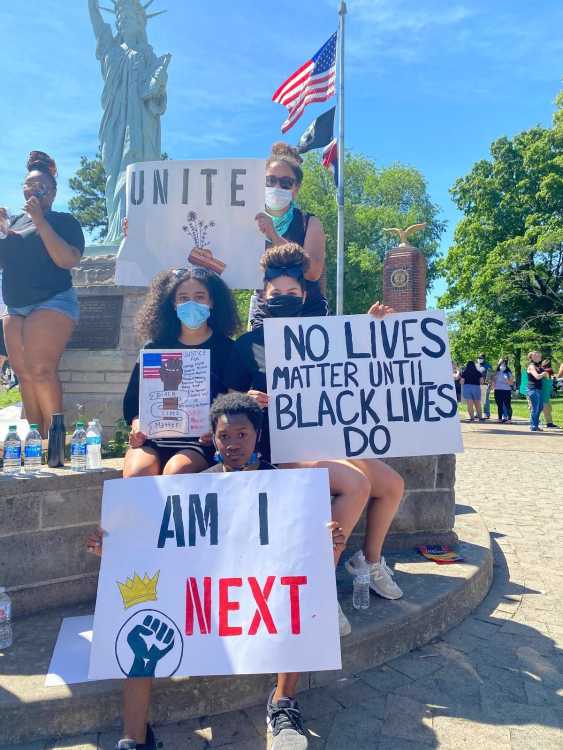 Miara Williams and Tiana Bowman (middle row) at the Black Lives Matter protest in Cape Girardeau on May 31.
Photo submitted by Miara Williams

Editor's note: This post has been edited for clarity.

On May 31, citizens of the city of Cape Girardeau participated in a Black Lives Matter protest in honor of George Floyd. Hundreds gathered at Capaha Park, including long time friends Miara Williams and Tiana Bowman. Bowman will be a senior in the fall, majoring in strategic communications at Maryville University, while Williams will be a junior nursing major at Southeast. They have been friends since Bowman’s freshman year of highschool.

The two never planned to meet at the protests, and Bowman wasn’t even sure she would attend the night before.

“[Williams] asked me if I was going and I wasn’t sure until the morning,” Bowman said. “My younger sister, who is 15, wanted to go and I thought this would be the perfect opportunity to expose her to stuff like this.”

Both Williams and Bowman said one of the main reasons they decided to protest was because of their younger siblings.

Williams said she speaks to her younger brothers often about the protests, and life as an African American male growing up. She said that since they are growing up as teenagers in this country (13 and 14), her family has had to have deliberate conversations with them to prepare them for treatment they may encounter, including potential police stops when they begin driving.

“We told them if you ever get pulled over be respectful, keep your hands in view, get to a well lit place and make sure other people are around,” Williams said.

She cited her time in the Cape Public School system as an inspiration for how she treats her younger sister. Williams said they try to build up her seven year old sister’s confidence everyday.

“If we told her at this age that people are hating her just because of the way she looks, it would cause such self esteem issues in the future,” Williams said. “I didn’t get it back then because no one ever sat down and talked to me about what was going on.”

Williams said working through those thoughts alone is something no one should have to do, because she knows from experience.

“I wanted to be seen as approachable and non-confrontational. I straightened my hair everyday, and hung out with people who didn’t respect me. Those were all forms of racism I had to unlearn. It really causes a divide within yourself, and it’s something no kid should have to go through,” Williams said.

Bowman has a similar relationship with her six younger siblings.

“It’s hard not to stand up for these things, knowing they look up to me. I know if I was younger I would want my older siblings to stand up for what is right, and show me exactly what it means to be an African American in this country,” Bowman said.

Bowman said her first experience with racism occurred while she attended second grade in Elizabethtown, Kentucky, and it shaped her views into what they are today.

“I was in a school play and I partnered up with a little white boy, and I remember him looking at me and saying ‘I don’t want to dance with you because you’re black,’” Bowman recalled. “I remember crying and I told my teacher, and I remember her saying she didn’t believe he meant anything by it because she knew the family, and they were a good family. At a very young age I had to realize not everyone would judge me by my personality.”

The protest in Cape Girardeau was the first protest that Bowman ever attended, but Williams had attended Pride protests before in support of the LGBTQ community. Williams took advantage of the open mic session at the Cape protest to talk about why she thinks now is the time to speak out.

“I think now and everyday after is the right time to speak out, because people are finally starting to notice that we are upset, we are tired and this isn’t something we can keep living through,” Williams restated.

Williams and Bowman said they discuss their emotions and thoughts about the protests in private, and it’s sometimes hard to wrap their heads around what is happening.

“It’s scary being at the protests when people are saying the cops are coming. You feel your heart drop. Are these cops coming to protect us and stand with us or tell us we need to stop,” Williams said. “It’s scary that in today’s day and age we still have to fight for our rights.”

Bowman agreed with Williams that it is hard to process the emotions from the protests.

“It’s like a kaleidoscope of emotions. It’s hard knowing people will never like you because of your skin color,” Bowman said. “The best way I can process them is by sitting down and talking or writing things down.”

On Tuesday, June 2, Williams and Bowman appeared live on BBC News to talk about the protests in Cape Girardeau. They discussed why they protest, and what they try to communicate when they protest. The interview brought both of them to tears, and Williams said they have received nothing but kind words and support since it aired.

“A lot of people have messaged me privately, thanking me for using my voice. I’ve had people who said that I inspired them to go out to their own local protests. I’ve had nothing but positive feedback,” Williams said.

Williams and Bowman provided some ways that people can help the cause moving forward.

Williams volunteers her time at the Boys and Girls Club in Cape Girardeau, where she said a lot of minority children go after they get off school.

“It’s important to show the people who didn’t grow up here that there are programs where you can change a child’s life by showing you care,” Williams said. “Voting locally also works because that is your voice, and you can choose who speaks for you.”

Bowman said the best way to show support for protesters is to continue to speak up.

“If you see someone saying something they have no business saying, say something about it,” Bowman said. “The best thing people not of color can do is use your voice and resources to say something. People seem to listen to them more than me or Miara.”