River Campus debuts livestream option for “Bring It On: The Musical” 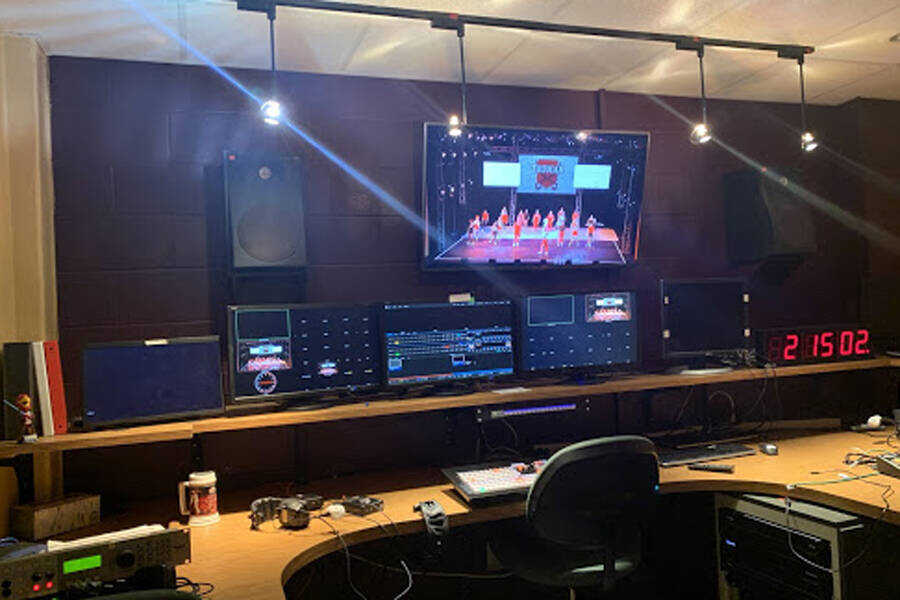 Footage from “Bring It On: The Musical” appears on screen at the production studio for livestreams, located in Rose Theater in the Grauel Building. All four cameras used at the musical stream back to this studio.
Photo by Sophia Davis

Students and faculty in the Holland College of Arts and Media have collaborated to offer livestreamed performances as a supplement to limited space in the theater due to the pandemic.

“Bring It On: The Musical” (“Bring It On”) is based loosely on the “Bring It On” film released in 2001. Southeast’s River Campus performed the musical from Aug. 6-8 and Aug. 12-15 at the Bedell Performance Hall. Seating space is limited to allow for social distancing.

“Bring It On” is the first theater production with livestream availability from the River Campus this fall. In addition to the many students and faculty already required to prepare a show, Professor of Mass Media James Dufek partnered in production to stream the performance.

Dufek said the concept of livestreaming is not new to the university; events such as football, basketball and other sports are filmed for ESPN. Dufek explained some techniques producers can utilize to engage the viewer more effectively than simply filming the whole stage from one angle, using the Disney+ version of “Hamilton” as an example.

“They record over a couple night’s time,” Dufek said. “One night, they’ll get close-ups … and the next couple of nights, they’ll record long shots … they’ll take the long shots and start cutting in all the other little pieces.”

Dufek used four cameras to help the audience members receive a more natural experience by offering different shots and angles for the livestream. He explained how filming the show can be made to feel like the viewer is at the event.

“We may not be able to recreate the full experience,” Dufek said. “But I try to keep the microphones open so you can hear the applause, the cheers and the laughter.”

“If a student has family in California who can’t fly in to see the show, they can sign on and stream the show from a distance,” Lavoie said.

Lavoie credits the pandemic for making this option more popular.

“I’ve been trying as much as possible with COVID to look on the bright side of things, and I think this might be a bright side to this semester,” Lavoie said. “The idea that friends and family members of the cast who can’t make it to Cape Girardeau can see them in shows they wouldn’t otherwise see.”

Although some folks are optimistic about the possibilities of livestreamed performances, it’s not a tried-and-true method quite yet. Holland College of Arts and Media Dean Rhonda Weller-Stilson said there were struggles during the first stream for “Bring It On.”

“The first show did not go off without a hitch,” Weller-Stilson said. “We had to delay the viewing.”

Weller-Stilson said there was no backlash from the community over the difficulties.

The show was delayed due to technical difficulties related to a miscommunication between the Mass Media Department and the ShowTix4U site. Dufek elaborated on the malfunction.

“Our system did not connect well with the ShowTix company,” Dufek said. “We had it up on their platform by midnight, and anyone who had tickets could watch it within 48 hours.”

Livestreaming has long been vital to entertaining. Broadcasts from news to sports are a part of everyday culture and society. The entertainment industry is ever-changing, especially in the face of adversity. Lavoie spoke on how artists adapt in challenging times.

“Everybody is being creative about how to solve the problem of how to do an art form that is fundamentally about congregating together in a time where we can't congregate,” Lavoie said.

Two other performances may be available for live streaming later in the semester. “The Wolves,” directed by Roxanne Wellington in September, and “Metamorphoses,” written by Mary Zimmerman in November.