Innovating for a new normal 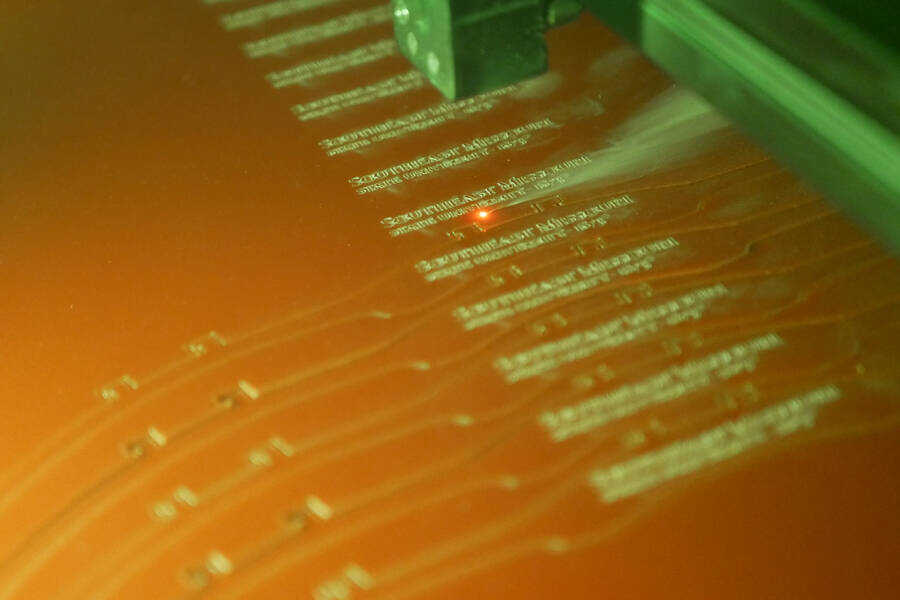 A laser carves out engraved headbands for face shields at the Seabaugh Polytechnic Building. The face shields will be distributed to staff members on campus.
Photo by Ethan Hutchison

As Southeast emptied campus for remote learning in late March, Brad Deken and Scott Wright returned to the Polytechnic Building on a Saturday to perfect their face shield design and creation process.

Deken, the Department of Engineering and Technology chairperson, said they have delivered about 3,000 masks on 35 different orders, and they have about 1,000 ready to go for future orders.

“Our goal is to help out the people that need it,” Deken said. “[The shields] are all given away, but we do make sure the [client] meets requirements. In the beginning it was all to hospitals, and then the commercial supply caught up so they started looking elsewhere. Then we went to dentists, schools and speech therapists.”

Deken and Wright, a technology supervisor, received the original plan for the face shields in the form of a free 3D printed design from 3DVerkstan, a 3D design company. Through some trial and error, they found that a 3D printer was far too slow to viably create large amounts of shields in a reasonable amount of time.

“The issue with the 3D printer is you can produce one [headband] every hour,” Deken said. “We spent a lot of time talking about what would be the most efficient process, and we ultimately decided the laser cutter was fastest.”

Once they switched to the laser cutter, more problems began to arise.

Laser cutters require fine tuning to ensure they are running at maximum efficiency. Deken and Wright had to pay attention to the strength of the laser first and foremost, as their first iterations had a five-inch flame coming off the plastic, which would render the sheet unusable.

“We covered the sheets in painter's tape so we wouldn’t scorch the plastic,” Wright said. “After it came out of the machine, we had to use a razor blade to get the tape off.”

Deken said that even though the tape was hard to remove, it let them cut a lot faster. In the beginning, speed is what was limiting production. 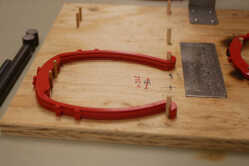 Using shaping posts, headbands are bent to allow for the attachment of the plastic face shield.
Photo by Ethan Hutchison

Next, they had to tweak the shape of their cut to create as many headbands on a sheet at once. Initially, they were cutting headband-shaped designs, but Deken found that cutting the headbands out straight and bending them into headband shape later was a lot more efficient based on how much material they could use. This allowed the plastic sheets to hold 20 masks compared to the original eight.

“The nice thing about plastic is that it's pliable when heated,” Deken said. “So we thought, ‘Why don’t we cut them straight and bend them later?’”

To do this, they developed a bending board where a hot plate was warmed to allow the corners of the headband to bend. They were then able to bend a few headbands at a time to ready them for the last part of the process, where they attach the actual shield.

The shield is made from a clear plastic sheet which is attached to the headband cutout. Deken said there were up to seven people at a time working on bending the bands and attaching the sheets in the Polytech lab.

Creating this process took Deken and Wright about a day, and it ramped their production up from one headband every hour (about eight a day) to 300 a day with no logo and 200 a day with a Southeast logo on the band. The logo versions have been distributed to Southeast faculty and staff.

The whole process has been mainly free, outside of purchasing a new air filter for the laser cutter. The four-foot-by-eight-foot red plastic sheets they use now were donated by Spartech Plastic, and all the transparent shields were given by a variety of donors.

The process also produces very minimal waste, as the excess plastic can be reused. 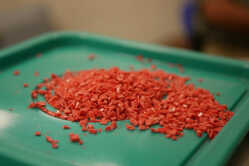 Leftover plastic from the face shields is ground into chunks and saved, these plastic pieces can be melted down later and reused for future projects.
Photo by Ethan Hutchison

“We were throwing this stuff away like crazy, and it’s like, man, that's such a waste, so we decided we could reuse the plastic,” Wright said. “We use this grinder that turns the plastic into chunks, and we can use the little pieces to pour into plastic molds later on.”

While working on the face shields, Deken and Wright developed other creations that are helpful in the world of the pandemic.

“In addition to the face shields, we were also making what we call the Montana mask. It's a 3D-printed N 95 replacement mask,” Deken said. “We were 3D printing these at the Catapult Creative House, the EDvolution Center and here.”

The pair's newest project is a hands-free door handle, which Wright says should be finished and on all of the Polytechnic Building’s doors by the time school starts.

“See, you can’t open these handles without using your hands, and we want to change that,” Wright said. “Not just for the virus but to make it easy access if you’re carrying something.”

Deken and Wright said they look forward to getting students involved in their projects once school starts August 24.