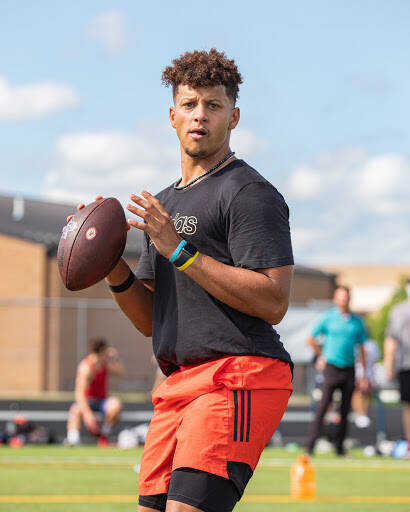 Over the summer, junior Jan Salmon had the opportunity to photograph a workout that included participants from the 2020 Super Bowl Champions, the Kansas City Chiefs.

Salmon’s interest in photography piqued at an early age because of his grandmother, but it was not until his freshman year of high school that he received his first camera as a gift from his mother.

“She was always at family reunions taking pictures which spiked my curiosity,” Salmon said. He says he found it “cool” how the process worked and how the pictures turned out.

As a member of his varsity football team at Fort Osage High School in Independence, Missouri, Salmon began photographing junior varsity games for the school’s yearbook committee. Once he graduated high school, he returned in his freetime to shoot games for his alma mater.

During the workout he had the chance to shoot photos of big-name Chiefs players like reigning Super Bowl MVP Patrick Mahomes, safety Tyrann Mathieu and cornerback Bashaud Breeland.

The stars aligned for Salmon when he got in touch with Mahomes' trainer who was searching for a photographer.

This chance was a big one for Salmon as he one day hopes to work with the National Football League in photography.

His work has been posted on social media by Mahomes himself and a couple other Chiefs players. This has led to him receiving follows on Instagram from many of the players he photographed, including Breeland, Anthony Hitchens and Mahomes.

“This has been a lifelong dream of mine,” said Salmon, who grew up a Chiefs fan.

Salmon said his favorite part of the photoshoot was getting to meet players like Mahomes and Travis Kelce, which helped make the experience a special one. Many of the players appreciated Salmon’s work which led to Mahomes’ trainer inviting him to future practices.

“Knowing that these guys appreciate me and my work means a lot,” Salmon said.

Salmon has also shot many events and workouts for athletes at Southeast, as well. Salmon said the biggest difference between shooting a college workout versus a professional workout was the nerves.

“Knowing that I was shooting bigger names was nerve wracking,” Salmon said. “In the end, they are just like us even though they play the sport professionally.”

He was able to maintain his composure while shooting the workout due to the fact that all the players were extremely humble and down-to-earth.

“I had a five-minute conversation with Mahomes after a practice, and he is a down-to-earth guy,” Salmon said. He also mentioned how Kelce just has that “swag” to him that can be seen while he is on the field.

Be on the lookout for Salmon at events around campus and follow him on Instagram at @JanSalmonVisuals.