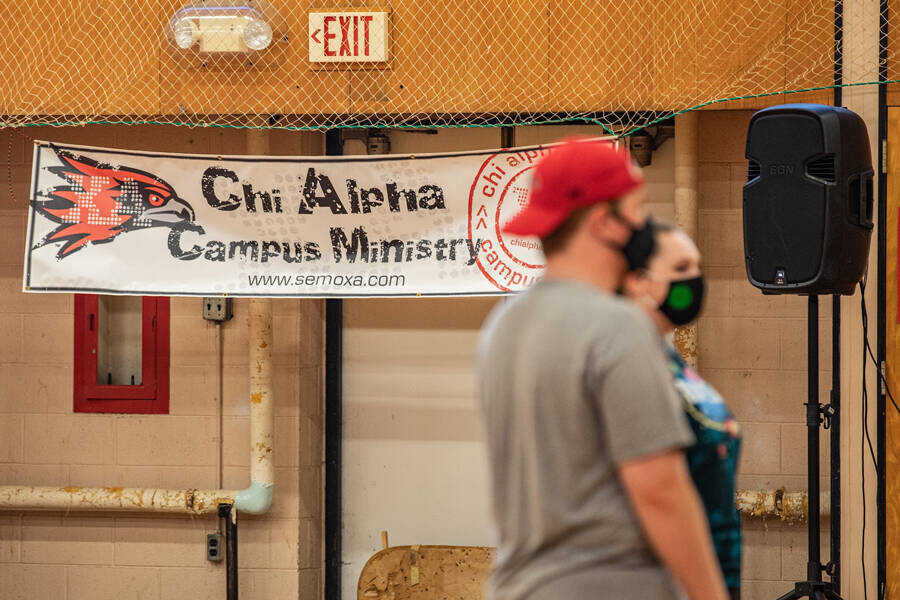 A Chi Alpha Campus Ministry banner hangs in the background of the bazooka ball event held on Aug. 31 in Parker Hall.
Photo by Ramond Buck

On Monday, Aug. 31, Chi Alpha held their annual bazooka ball event. The event drew a large group of students to the lower gym in Parker Hall.

Students were able to take part in the bazooka ball games or participate in one of the many other activities that were offered such as volleyball, badminton and Frisbee. They also provided popsicles to help keep people cool.

Bazooka ball is played with two teams that line up on different sides of a court. Each team has four players, and the court has different barriers to hide behind. Each player is given protective goggles and an air cannon they load with foam balls. If a player is shot by an opposing team’s ball, then they are out. The first team to knock out all the other teams’ players wins.

“I think it’s a great way to meet new people,” freshman Sam Knutson said of the event. “I’ve done some events with [Chi Alpha] before, and this seemed like a fun way to hang out with the people you’ve already met and meet new people.”

Zach Vandiver, also a freshman, echoed the thoughts of Knutson.

“[I enjoy] meeting new people and then hanging out with some of the people that I met from previous events,” Vandiver said.

The event was put on by James Boley, director of Chi Alpha.

“This is a part of what we call our kickoff events ... We try to make sure we have some kickoff events the first couple of weeks of school that allow kids to meet up with people and kind of start those connections sooner rather than later,” Boley said.

Although the event went on as planned, Boley faced a few obstacles in preparation.

“The biggest challenge at this time has been making sure that any event we plan is done within university standards,” Boley said. “We’re keeping everybody safe, [and] we’re not trying to do anything that pushes boundaries.”

Boley said the turnout they are getting this year was unexpected in light of the pandemic; he was surprised and very pleased by the turnouts so far.

Boley also said Chi Alpha wants to provide a community students are longing for during this time.

“You know people are hungry for community right now, it’s an especially hard time for a lot of people,” Boley said. “We’re trying to make sure that we are giving people an opportunity to do that in a safe environment.”

Boley said the retention rate of college students is based on their involvement in student organizations and is one of the main reasons as to why they want people involved with their organization.

To find out more about Chi Alpha’s future events or other upcoming student organizations’ events, check out the Engage in 8 on the SEMO webpage.