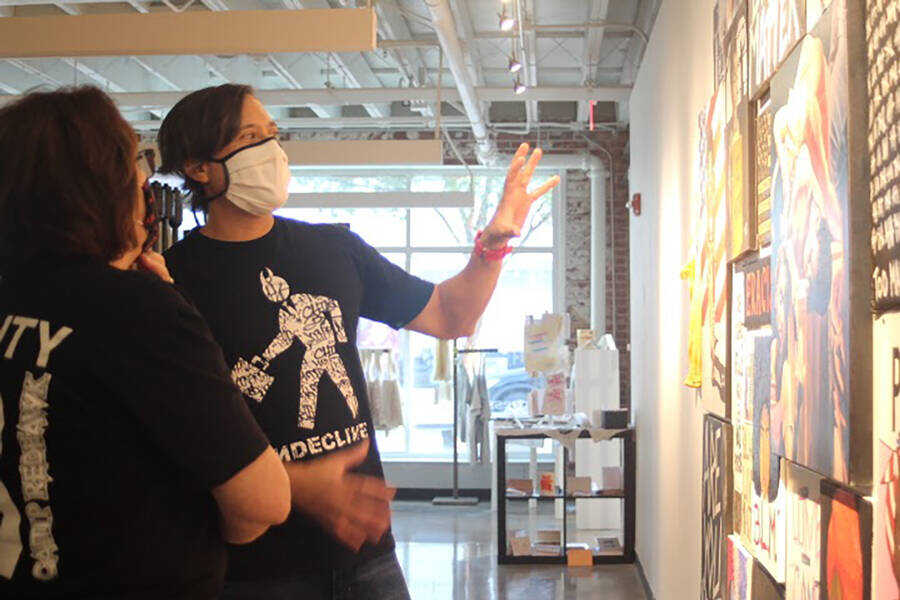 Professor Benjie Heu speaks about the Black Lives Matter exhibit with Rhonda Weller-Stilson during the gallery opening on September 4. The gallery contains artwork from Southeast faculty and students, including four of Heu’s original pieces.
Photo by Nicolette Baker

A new exhibit at Catapult Creative House focuses on the Black Lives Matter Movement, raising awareness through art submissions from Southeast faculty, students and staff. The 25-piece collection includes artwork in a variety of mediums, including charcoal, paint and photography.

Sophomore international business and Spanish student Shanté Hanna submitted three charcoal pieces for the exhibit — “Spirit,” “See Me” and “Energy.” She said many of her portraits feature African-American subjects and carry deeper meaning. Her piece, “Spirit,” represents a woman constantly improving despite difficult times in her life, Hanna said.

“I wanted to create something that made people look at it, and look at it longer than 30 seconds,” Hanna said. “I want them to think about what was going through my head when I was creating it.”

Professor of Ceramics in the Art and Design Department Benjie Heu led the curation of the exhibit, which opened during the First Friday events on September 4. When a gallery spot opened earlier this year, Heu said he wanted to use it to highlight the Black Lives Matter movement. A call for submissions began at the beginning of the semester, Heu said, following Black Lives Matter protests across the country during the summer.

“Black Lives Matter is important to [students], and we want students and faculty to be able to express themselves,” Heu said. “During quarantine, a lot of things happened. Students from St. Louis as well as students from rural areas have emotions they want to express.”

Heu noted the challenges surrounding protesting during COVID-19: “Artists need a way to express themselves, and this was one way to get that out.”

As part of the Diversity and Inclusion Committee, music professor Joseph Jefferson said it’s important to shed light on marginalized and underrepresented communities.

He created a piece with the word “Eracism” in red against a black background. The inspiration behind the piece is communicating that no race should be considered better than another, Jefferson said.

Theater design technology and arts freshman Emma Weller-Stilson attended the gallery opening with her family. She created the piece Persist using a digital rendering which was transferred to canvas. It features an image of a woman resembling “Rosie the Riveter” with the word “Persist” above her.

Jefferson, Heu and Weller-Stilson agreed that the most impactful piece is “I Matter” by Alfonzo Branch.

“Everytime I look at that piece, I think of my son. He’s two years old, going on three, and if I saw him with this poster that says ‘I matter,’ that’s heartbreaking, to think a child would have to say that at such an early age,” Jefferson said.

The exhibit will remain at Catapult Creative House, located at 612 Broadway, until September 25.