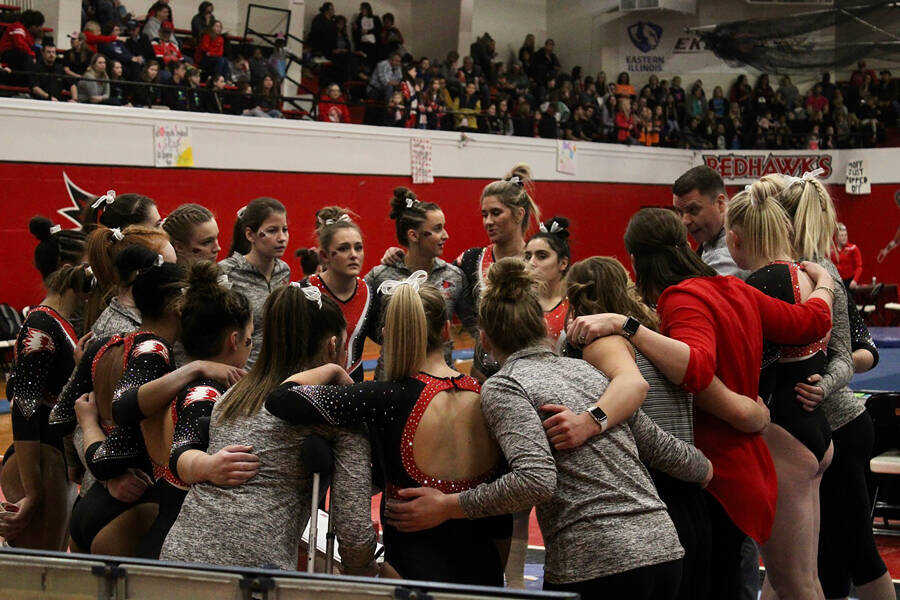 Jones played a large role in Vanderboom’s decision to come to Cape Girardeau.

“If it was one thing, it would probably be my friend Jordan on the team, because we came from the same gym at home,” Vanderboom said. “When transferring, I wanted to go somewhere that wasn’t completely new or without people that I didn’t know at all.”

Her connection with Jones was the only physical connection she had with Southeast before deciding to transfer — she hadn’t even set foot on campus at the time she made the decision.

“I looked up tours and pictures online before, so I knew kind of what it would look like, but it’s more spread out than Temple, because Temple has tall buildings. Nothing really threw me off, though.”

Because of how late in the summer Vanderboom transferred, she came to Southeast as a walk-on, just like she was at Temple. She said she is glad to be at Southeast, even as a walk-on, because she can continue doing gymnastics while earning an affordable education in a field she desires.

Vanderboom comes to Southeast as an industrial and systems engineer major, something Southeast offers that a lot of other universities she looked at didn’t.

That was another reason for transferring, she said.

“At Temple, I was a walk-on, and the tuition is a lot higher [than at SEMO],” Vanderboom said. “My coach told me that it would be difficult for him to get me a scholarship at the time, so I decided I needed to transfer somewhere else, because I didn’t want to be in debt for the rest of my life. I did like it there, but not enough to pay that much money all the time.”

Both of Vanderboom’s parents were software engineers, which she said influenced her decision to pursue engineering in some capacity.

With a challenging major and the combined strain of being a student athlete, Vanderboom knows it’s no easy task balancing workloads, but has plans to keep herself organized and on top of things.

“I try to plan everything out for the week in a planner, and I try to get everything done as soon as possible and not wait until the last minute,” Vanderboom said. “So whenever I have free time, I just do homework.”

If able to balance her busy workload effectively, Vanderboom hopes to contribute consistently in at least two events, namely beam and vault, her best event. Most importantly, she wants to enjoy herself and “not put too much stress on the sport. Just have fun.”

“I just have to remind myself that I’ve done all of those skills so many times, I don’t really need to worry about them, and that just helps me be more carefree,” Vanderboom said. “It’s definitely a lot more fun when there’s music and everyone’s dancing and laughing and having fun.”

Southeast coach Ashley Lawson said the plan is to have Vanderboom train in every event.

“We will have her train all the events and then just see where she fits in for our lineup,” Lawson said. “We have a team of 20, and only six athletes can compete in one event.”

Since Lawson began coaching the Redhawks two years ago, the program has seen a revival in the energy at events, boosting the entire atmosphere and resulting in the Redhawks’ first winning season since 2014.

“Jordan always told me that she really liked the coaches. What she told me about Ashley [Lawson] was pretty good, and I thought it sounded like somewhere I wanted to be,” Vanderboom said. “We can definitely build off of what they finished with last year, and I think that’ll give us the confidence we need to start off well and just go up from there.”

Last season was not only successful for Southeast, but also for Temple, which won the 2020 Eastern College Athletic Conference Championship with Vanderboom’s aid. The year at a larger school and helping them win a championship taught Vanderboom a lot about herself that she hopes will carry over into her sophomore season, making her a better gymnast.

“I just need to be confident in myself and give myself credit for all that I work for and know that I’m capable of doing great things,” Vanderboom said “Even though I doubt myself sometimes, it helps me realize that I am good at gymnastics.”

Lawson said the championship experience Vanderboom brings to the team could play a key role in the success the Redhawks have this season.

“Their team was the [conference] champions last year,” Lawson said. “Ultimately, [that’s] one of our main goals this year.”

The official schedule for Southeast gymnastics has not been released, but stay up-to-date by visiting gosoutheast.com.