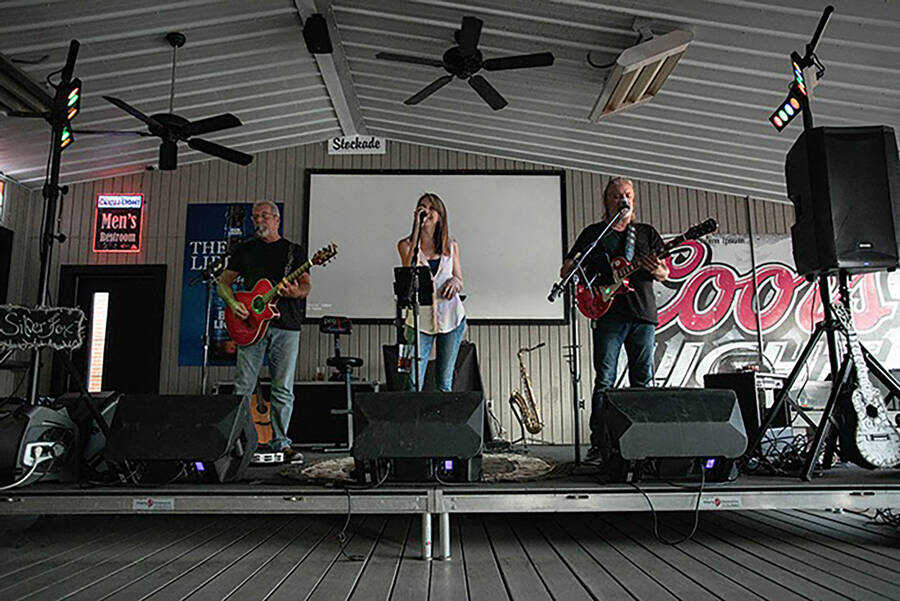 Electronic cords cover the large outdoor stage, with three microphones standing tall and two large speakers close by. Two guitarists and a singer, microphone in hand, step into their places on stage. The music begins.

The sharp tambourine and bass sounds hit on beats two and four. One *tap* three *tap*. An echo of a guitar riff is in the air. The soft strums of an acoustic guitar accompany harmonizing vocals.

These euphonious sounds are brought to life by the band SilverFox.

SilverFox appeared at a live show Sept. 11, 2020, at The Library. The group is composed of two guitarists and a lead singer- Kevin Grimsley, Chas Watkins, and Callie Parker.

Lead vocalist Callie Parker said the band name, SilverFox, developed after a photo shoot done by her sister-in-law for a promo pack. “There was one picture where we were standing in a doorway. I was standing in between them, and they were both looking at me while I looked at the camera,” Parker said.

“When my sister-in-law showed us the picture on her camera, they [Grimsley and Wakins] made the comment about how grey they are. I said, ‘Aren’t handsome men that are grey called Silver Foxes?’ Then we all just kind of had that light bulb go off and there it was, SilverFox.”

The group has been performing together and booking more than 125 shows per year for more than four-and-a-half years. Grimsley said that their fitted three-part harmonies are unmatchable and bring a uniqueness to their live shows.

Many bands get together for weekly practices, but for SilverFox, practicing as a whole group never needs to happen anymore. Grimsley said when the band started, Watkins and Parker were already performers together.

“In the very beginning, we practiced a lot to kind of learn each other, to see what we were capable of and what we could do,” Grimsley said. “After that, we were just playing so much, we didn’t have to [practice].”

The band uses a unique instrumentation for their performances. Instead of a full drum set, they incorporate a drum machine that has a remote control kick drum and an electronic foot pedal snare drum. While Grimsely hands are strumming on the guitar, he also plays a tambourine with his foot to tap along to the songs.

Grimsley said the band used to make their own tracks to play along with for live performances, but somehow they always went back to their basic instrument set-up.

“We sound like five people, but we are just three,” said Grimsley.

The band's performance that night also included a special guest, David Britton, a member of the band “Head 1st,” who plays a few songs on the saxophone with SilverFox three or four times a year.

Along with the instrumentation, each show put on by the band is unique. They never use a setlist and let the audience’s voices fill their song order with on the spot requests. Watkins possesses the nickname “human jukebox” due to his ability to play any song he has only heard from memory. Any request made is ready to be played for the crowd.

The audience did not hesitate to get up and dance to the band last Friday night. For the non-dancers in the crowd, they still were bobbing their heads or tapping their feet to the beats of SilverFox.

The band’s sound covers a little bit of everything, mainly covering songs under the genres of country, rock, and even blues.

“We all have different tastes, but we have always been country-oriented,” Grimsley said.

To create some music diversity, he mentions that Parker will bring more up-to-date songs around while Grimsley will try to bring older tunes to play. Even with the cover songs, they always try to make everything sound uniquely SilverFox.

Some songs that were played through the night were - Tequila Sunrise by the Eagles, Mama Tried by Merle Haggard, Ain’t No Sunshine by Joe Cocker, Fishin in the Dark by Nitty Gritty Dirt Band, and so many more.

For more information about the band and concert updates, visit their Facebook page.