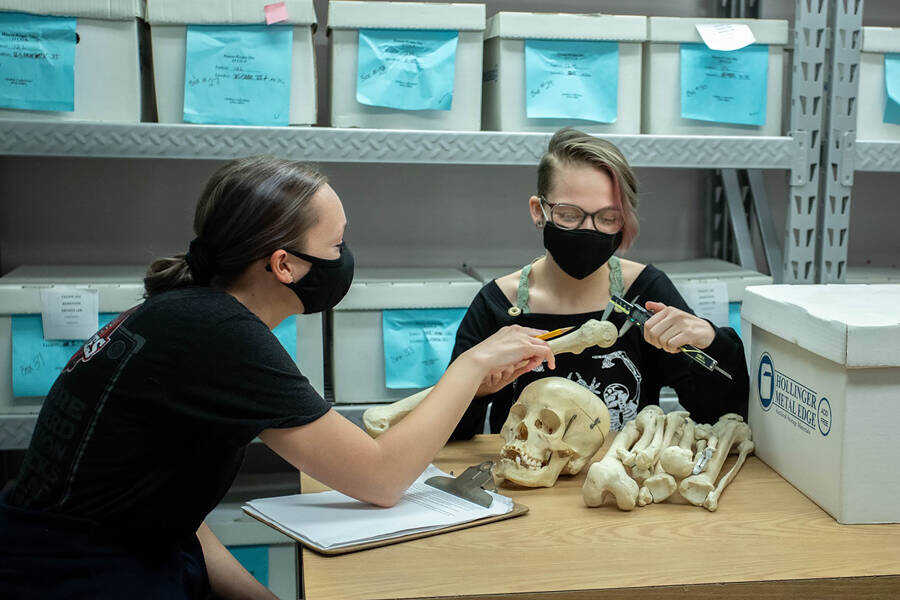 The process of identifying a body from a cold case is a long and difficult one, but according to Jennifer Bengtson, associate professor of anthropology, it is also a rewarding one.

In April, Bengtson and some of the students in Southeast’s anthropology club concluded a six-year journey in identifying remains from a cold case from 1979. The case was reopened by Bengtson in 2013 in an effort to give undergraduate anthropology students experience they can’t get at other universities.

“We don’t have a graduate program in anthropology here, so the beneficiaries of these kinds of forensic projects are my undergraduate students,” Bengtson said. “There’s not a lot of places they could get as deeply involved in case work as they can here.”

Bengtson’s main area of anthropological study is on bone structure and using characteristics of a skeleton to help identify a person.

In August, Bengtson and the anthropology club opened a new case on remains found in Cape Girardeau County in 1980. So far, they suspect the body is likely a male with European ancestry. The skeleton does not have any teeth, so Bengtson suspects it was an older individual, although this characteristic does not always mean old age.

“The DNA was particularly poorly preserved in this case,” Bengtson said. “When I sent a sample for CODIS testing, they could only sequence a little part of the DNA.”

The first step in identifying an older body with no flesh is the skeletal examination.

Skeletal examinations are the beginning of a biological profile — an estimation of the sex, age, stature, ancestry and cause of death.

After Bengtson and her students identify as much as they can from the skeletal remains, they enter the information into the National Missing and Unidentified Person System (NamUs). NamUs cross checks the information against missing person cases across the country and was created in 2007.

“The cases that I work on tend to be older cases from the ‘70s and ‘80s,” Bengtson said. “Oftentimes, people weren’t reported missing or those cases predate NamUs existing.”

A big reason cold cases go unsolved is because the technology needed to solve the case did not exist when the case was being investigated. The first use of DNA profiling to solve a crime was in 1983, after Bengtson’s cases went cold.

“DNA technology was not there in the late ‘70s and early ‘80s. We have come leaps and bounds,” Bengtson said. “Even communication back then was not what it is today. Information moves so fast now that if there’s a missing person, you’ll get the AMBER alert right away.”

If no leads are found in the NamUs system, the next step is to send a sample of bone or tooth to the University of North Texas for DNA analysis. They perform CODIS (Combined DNA Index System) testing, which involves looking at genetic samples and trying to match them to people who have submitted DNA samples.

The last test that can be done is called forensic genealogy. Bengtson said this type of test grew in popularity recently due to commercial DNA tests like ancestry.com or 23andMe. The commercial popularity of genealogy testing has made it one of the easiest ways to find DNA matches and is the test that solved Bengtson’s cold case in April.

“We were able to make the identification, and after 41 years, we returned the remains to his family, who were super grateful for it,” Bengtson said. “That was a good feeling.”

The main reason Bengtson does this kind of work is because she thinks “everyone deserves for their family to know what happened to them and to have access to their remains.”

“It can be really depressing to [do] this kind of work, but it can also be deeply rewarding,” Bengtson said. “It brings a measure of peace. It’s just the right and ethical thing to do for these people.”

The anthropology club is currently fundraising to pay for the genealogy testing on their new case. To donate, click here.