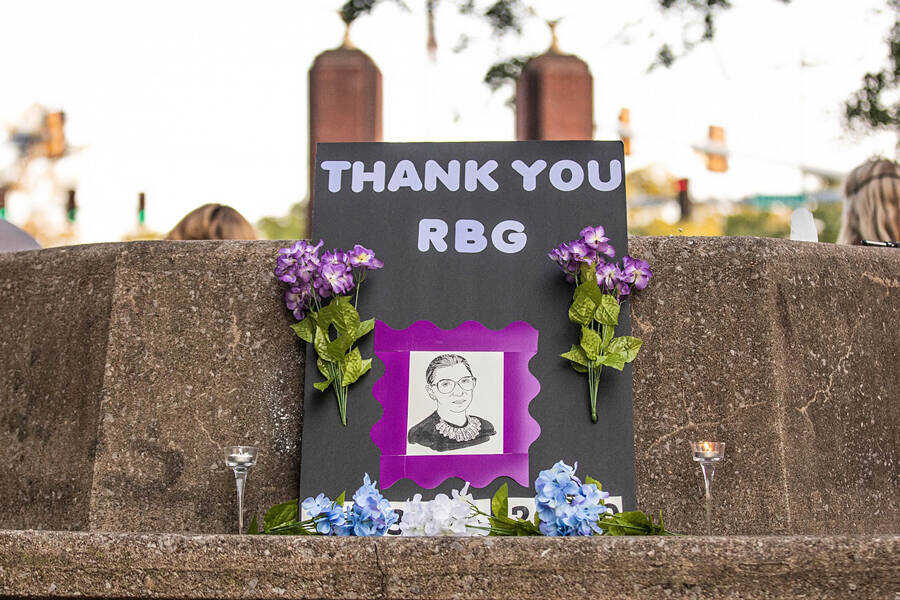 A tribute poster to Ruth Bader Ginsberg at a candlelight vigil in her honor on Sept. 20 at Capaha Park.
Photo by Jan Salmon

Members of the community gathered together in Capaha Park Sunday for a candlelight vigil in memory of Associate Justice Ruth Bader Ginsburg.

“Ginsburg fought for human and civil rights,” Lerma said. “Specifically, gender equality, and when you look at feminism and gender equality, it also encompases LGBT+ rights. As someone who identifies as part of the community, her fight for issues that pertain to me are very personal. Especially when you consider her vote was imperative to getting marriage equality passed. Her legacy of standing up in a space where she had influence and power is very important for people who live everyday lives just like us.”

The Supreme Court released a statement Friday, Sept. 18, stating Ginsburg passed with her family in her home in Washington, D.C.

Ginsburg was diagnosed with pancreatic cancer in 2009, battling the condition for years with several rounds of chemotherapy. She had previously survived both lung and colon cancer.

“Our Nation has lost a jurist of historic stature. We at the Supreme Court have lost a cherished colleague. Today we mourn, but with confidence that future generations will remember Ruth Bader Ginsburg as we knew her — a tireless and resolute champion of justice,” Chief Justice John G. Roberts, Jr. stated.

Susan Kendrick, Southeast English professor and chairperson, said Ginsburg lived as an inspiration by not separating her beliefs from her work.

“I think part of her legacy is that you can’t make laws when only half of the people participated in the process,” Kendrick said. “If there's not true equality in a society, that society cannot function appropriately, especially when it calls itself a democracy.”

Throughout her early career and legal training, Ginsburg was famously outspoken in matters of inequality and prejudice. Many of her earliest cases were centered on questions of gender discrimintation — something she would fight personally and in the courtroom for the rest of her career.

She was the second woman ever appointed to the nation's highest court — serving for more than 27 years.

Ginsburg was a fierce supporter of all women and a vocal advocate of having more women in the court system. Her fellow justices remember her as a mentor and friend.

“Ruth reached out to encourage and assist me in my career, as she did for so many others, long before I came to the Supreme Court. And she guided and inspired me on matters large and small once I became her colleague,” Justice Elena Kagan stated.

Ginsburg's chair and bench as well as the doors of The Supreme Court have been draped in black wool as a traditional sign of mourning.

Before the crowd sang “This Little Light of Mine,” Kendrick closed the vigil with a poem by Edna St. Vincent Millay which was retitled “To Inez Millholland” in 1928 — originally titled “The Pioneer.” The final lines are as follows:

“The stone will perish; I shall be twice dust. / Only my standard on a taken hill / Can cheat the mildew and the red-brown rust / And make immortal my adventurous will. / Even now the silk is tugging at the staff: / Take up the song; forget the epitaph.”