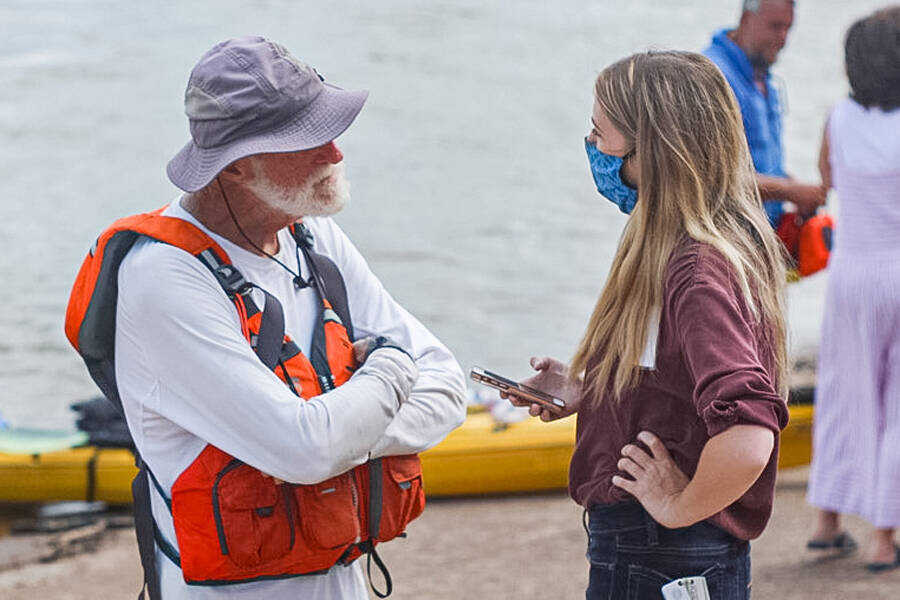 Reporter Brooke Holford interviews Stan Stark, known as "Stan the Kayaking Man." Stark is paddling 2,400 miles down the Mississippi River in a kayak; Stark is using this opportunity to raise awareness and funds for Sarge's Place, a shelter for homeless veterans.
Photo by Jan Salmon

An 81-year-old retired Navy Seabee is proving it is never too late to follow your dreams by paddling a sea kayak approximately 2,400 miles down the full length of the Mississippi River.

Stan Stark, known as ôStan the Kayaking Manö will set the world record for being the oldest person to paddle this feat upon completion.

Stark is making this paddle to raise awareness and funds for Sargeĺs Place, a Washington state shelter for homeless veterans.

Stark is well on his way to breaking the record; the retired veteran and the two kayakers who have joined him along the way stopped in Cape Girardeau from Wednesday, Sept. 16, to Friday, Sept. 18.

While Stark may set a Guinness World Record with this voyage, he said the most rewarding part of this journey are the people heĺs met along the way.

A large group of community members, city officials, local veterans and university members gathered to welcome the kayakers on Wednesday, waving flags and cheering for the approaching trio.

Several Southeast students, alumni and employees had the chance to meet Stark during his visit.

Southeast senior Daniel Wallace said he went to the riverfront on Wednesday with a few of his brothers in Sigma Nu Fraternity to welcome Stark.

Wallace said they spoke with Stark at the riverfront because they wanted to show their support for the veteran. After hearing his stories, Wallace said he felt inspired.

ôI found Stan very inspirational because heĺs raising awareness and funds for veterans,ö Wallace said. ôNot only is he attempting to break a world record, he has been very modest and humble about how itĺs more important to recognize the veterans who have gone unnoticed in the world.ö

Meyer said when he heard what Stark was doing, and that he was a Seabee, he immediately put on his Seabee gear and rushed to the river to meet him.

Meyer said itĺs rare for him to find another Seabee, but to find someone who has been through the same training and combat situations, Meyer said, is ôjust like putting two brothers together.ö

ôI was in awe of [Stark] Ś heĺs a very determined person to make the effort and accomplish what heĺs doing,ö Meyer said. ôOf course, the Seabees were known for doing the impossible; our motto was Ĺcan do,ĺ so it really doesnĺt surprise me because thatĺs just how we were.ö

While in Cape Girardeau, Stark and his travel companions also visited Missouriĺs National Veteranĺs Memorial in Perryville, Missouri, and the Avenue of Flags Memorial in Cape County Park. There was a send-off for the group on Friday morning.

Cantoni said she followed Stark through the tracker on his website, stanthekayakingman.com, and spread the word about Starkĺs arrival on Facebook.

Cape Girardeau is one of many stops Stark has planned for his long trek down the Mississippi.

Stark said he wanted to stop in Cape Girardeau because he had visited the city previously and ôknew it was a beautiful city with wonderful people.ö

To make a donation to Sargeĺs Place or follow Stark along his journey with the virtual tracker, visit stanthekayakingman.com.

ôA remarkable journey:ö Flora, fauna and friendship on the Mississippi 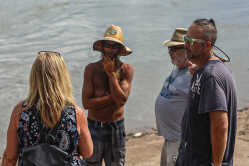 Fast-forward two months later, it seems Stark is anything but alone.

Stark has been making waves in the Midwest as word of his journey has spread through Facebook and other social media Ś the traveler has gained a large following.

Throughout this adventure, Stark said he has been able to ômeet beautiful people while also learning about the region.ö

ôThereĺs beauty along the river that you couldnĺt even imagine,ö Stark said. ôThe flora and fauna, and especially the people.ö

Kayakers from across the Midwest have joined Stark on the river, he said, and locals living along the banks of the Mississippi River have offered him ôkindness and supportö on his journey by providing food or shelter for the travelers.

Stark said he was ôin aweö when the trio paddled into Cape Girardeau and saw the large group of people waiting for them. That was the largest welcoming they had received so far, he said.

Brian Hoover and Chase Brennen are two kayakers who joined Stark early on in his adventure, and they said they plan to paddle all the way to the Gulf of Mexico with Stark.

Prior to coming together on the river, Hoover, Brennen and Stark had never met each other. Brennen said since then, a unique bond has been created between the trio.

ôWe all want to complete this feat Ś and weĺre doing it together Ś so through that, we have developed this great friendship,ö Brennen said.

Stark said he had been thinking about completing this feat for the past few years but hadnĺt gotten around to it. However, Stark said his wife passed away not too long ago, and after that, he found he had a lot of free time on his hands.

Stark said wherever he visits, he hopes to act as a motivation to others that ôyou are never too old to do anything.ö

ôYou only have one life, so do the things you want to do, and have fun,ö Stark said.

Stark plans to finish his journey around the end of October at the Gulf of Mexico.