The pack returns for an entirely streamed run of “The Wolves” 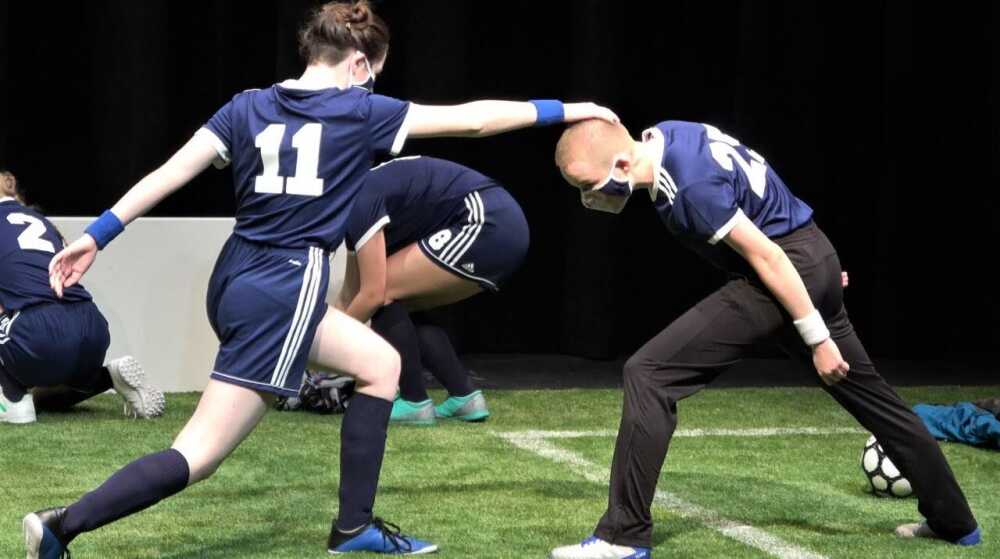 Actresses Ally Wutkitsch (#11) and Hollynn St. Clair (#25) rehearse a scene for “The Wolves.” Due to COVID-19, the blocking was adjusted for minimum contact, unless absolutely called for.
Photo submitted by Roxanne Wellington

As the curtain closed early on the Spring 2020 semester, River Campus productions such as “The Wolves” were thrown into uncertainty.

“The Wolves,” written by Sarah DeLappe, is a six-scene play focusing on a girls’ soccer team, delving into the female mind with an all-female cast directed by Roxanne Wellington. According to Public Relations and Theater Alumna Francesca Bucci, an all-female cast is typically hard to come by in theater.

“It’s an all-female cast, and you don’t ever have that, having live theater with just all females in the room. We had a female director and a female trainer, and an almost all-female design team; that’s such a powerful feeling,” Bucci said. “So many times, as a woman in theater, you’re constantly losing roles, because there’s so many roles for men.”

Bucci saw “The Wolves” with Wellington years ago and has pushed for the show to be performed at Southeast ever since.

“I went and saw it with, who ended up directing it, Roxanne,” Bucci said. “We saw it in Chicago two or three years ago. I’ve been trying to push it for so many years, and I was finally able to do this as my last show, and then it was just like, ‘Just kidding.’”

During the pandemic, the cast met over Zoom, reading one act a week until they made it through the entire show. The cast also kept up with their workouts and soccer training for the show, with videos and tips from the show’s soccer coordinator, Shannon Truxel. 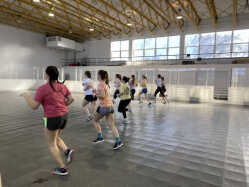 The cast of “The Wolves” runs drills during a rehearsal.
Photo submitted by Roxanne Wellington

“Shannon, our trainer, did ‘tricks of the week’ that she would post on her Facebook page, and we would all try to get the trick and then post us doing it,” Bucci said. “We still had a workout schedule that we were trying to keep to, because we had to keep in shape for the show. It’s 90 straight minutes, no intermission, and we’re stretching, running and playing soccer for those 90 minutes.”

The entire cast originally planned for the show’s run in April was able to return, including two Class of 2020 graduates, Bucci and MacKenzie Hamilton. Bucci came from Chicago, and Hamilton flew in from California to be able to finish what they started.

To ensure the cast remained healthy and safe, hand sanitizer was incorporated into the show through their soccer bags to be used as a prop. The cast had masks made to match their uniforms, but the masks incorporated clear plastic over the mouth, so the audience would be able to see their lips. The show was moved from a live to streamed performance.

“Theater is meant to be seen live,” Hamilton said. “The show is really funny, but if you don’t have an audience, it’s hard for us as actors to know that we’re doing things correctly and delivering the [lines] the way they should be delivered without the audience reaction.”

According to Bucci and Hamilton, the show’s streaming worked to their benefit: they have been able to share their performances with family members spread across the country who may not be able to come see the production under normal circumstances.

“The Wolves” opened for streaming Sept. 16 - 20 and will have its final performances Sept. 25 - 27. Southeast students can still get their student discount to see the show. A coupon code can be found in an Aug. 31 email to student accounts from Southeast River Campus or by contacting the River Campus box office.