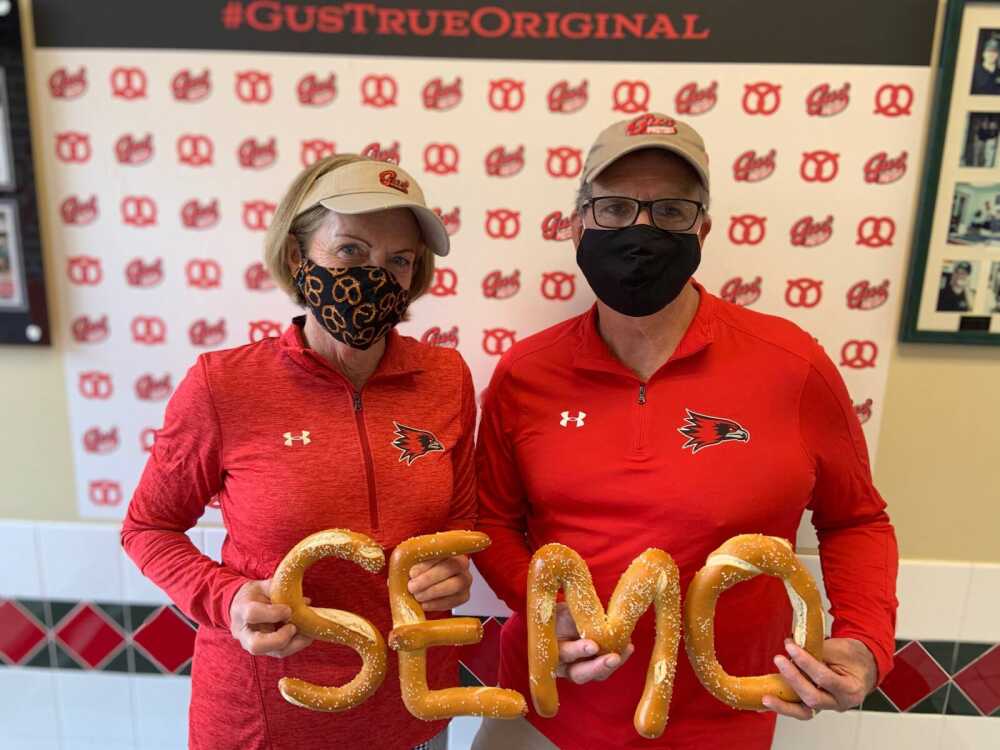 Gus’ Pretzels, a St. Louis pretzel company, has been a staple of the community since their founding in 1920.

The current owners of Gus’, Gus Jr. and Suzanne Koebbe, graduated from Southeast in 1978. In January of 1980, Gus Jr. purchased the company from his father.

Gus Jr. and Suzanne met each other on their first night at Southeast outside of Kent Library.

“It’s kind of like a love story,” Suzanne said.

The love story continued after college, when Gus Jr. and Suzanne got married in August of 1980. Gus Jr. jokingly said the main reason they got married was because he “needed help running the shop and couldn’t afford to hire anyone.”

The Koebbes periodically travel to Cape Girardeau to visit the school or their favorite pizza place, Pagliai’s.

Gus’ was founded in 1920 by Frank Ramsperger, Gus Jr. 's grandfather. In 1944, Marcella Ramsperger married Gus Sr., who took over the company in 1952 and officially named it Gus’ Pretzels.

Gus Jr. was one of seven Koebbe children and said he has been a part of the business his entire life.

“At eight years old, I was selling pretzels on the corner,” Gus Jr. said. “As soon as you could reach the board, you’d be twisting pretzels, waiting on people or sweeping up. It's a part of the family tradition.”

Gus Jr. said he always wanted to take over the business, but his father never wanted him to.

Gus’ Pretzels is as much a St. Louis tradition as the Zoo or the Arch, and Suzanne recognizes how much it has grown into that role since Gus Jr. bought the company.

“So many people come to St. Louis, and it's the first place they stop,” Suzanne said. “It just reminds them of when they were growing up and when their grandpa would take them to Gus’ on a Sunday morning after church.”

With this year being the 100th anniversary of Gus’, the Koebbes had many special events planned to celebrate, but cancelled them all because of COVID-19. Suzanne said they are just trying to ”maintain and sustain” until the restrictions are up.

The Koebbes are planning on having their son, Gus III, take over Jan. 1 so they can complete their 40-year circuit.

“We’ve had it 40 years and now; we’re getting to that age where it's time to step aside and let the next generation in,” Gus Jr. said. “We just had Gus IV born on Sept. 5, so hopefully it will continue.”

For more information on Gus’, visit their website at guspretzels.com.