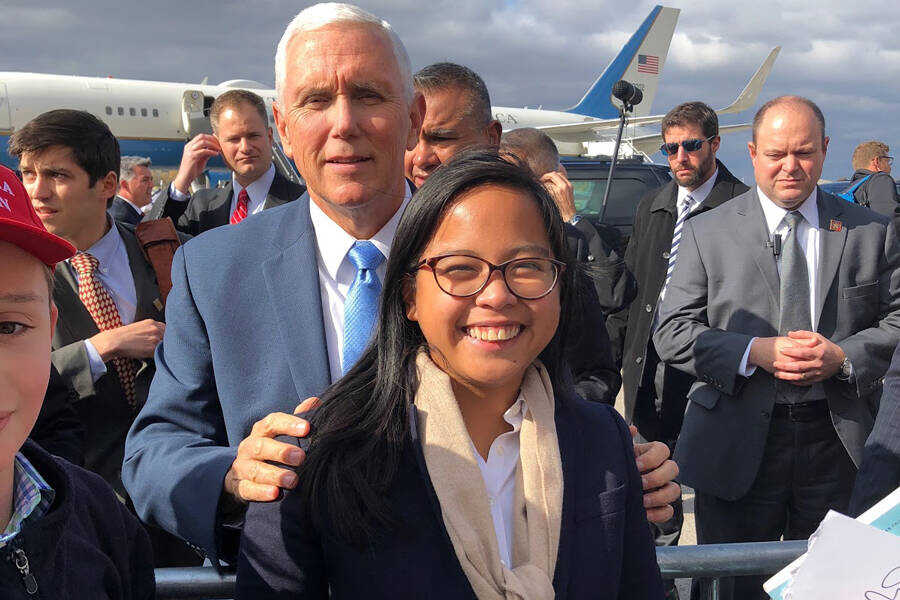 Jacqueline Neil with Vice President Mike Pence in 2018 in front of Air Force 2. She was part of his advance team for his visit to Kansas City.
Photo submitted by Jacqueline Neil

Jacqueline Neil, Southeast graduate, was recently included on the “30 Under 30” list released by the political media company The Missouri Times every year. The list is made up of optimistic young adults working in Missouri politics.

It was never Neil’s plan to work in politics; it's a field she stumbled into.

“When you come to turn 18, you don't really know what options there are outside of a traditional career path,” Neil said. “I was always daydreaming in classes, ‘What do I have to do to be the person who makes the Spotify playlist for American Eagle? What do I have to do to run a Twitter account for a Fortune 500 company?’ That's where my mind was, for the most part, while attending SEMO.”

Neil declared her major as public relations, advertising, marketing management and communication studies at the end of her freshman year.

Neil had a handful of internships while attending Southeast, but her internship at Yelp as a marketing intern before her senior year would set her down the path of digital consulting.

Looking to do something more competitive, Neil reached out to many different sources in the Cape Girardeau alumni network, hoping to land at a local marketing agency.

Instead, she found herself working for the Lt. Gov. of Missouri Peter Kinder as his deputy communications director during his bid for governor in 2016.

“When I joined that campaign, I found that I was really good at doing [communications],” Neil said. “I was writing press releases, but I was also drafting media plans for our campaign. I found I was really good in digital because politics and political campaigns — the landscape — has changed because of digital, and I worked with a lot of press people who needed help rewriting the script for the internet.”

Normally traveling for her job instead of working from her home in Kansas City, Missouri, Neil said the political machine has changed in a major way.

One direction of movement is toward the increased focus on digital marketing. Neil said no political campaign is serious without a digital component as the demand for campaigns grows rapidly.

“Last week, when Ruth Bader Ginsburg’s death was announced, we saw democrats fundraise over 100 million [dollars],” Neil said. “So when that kind of news happens, a lot of political campaigns, they turn to digital vendors, because they say, ‘I want those kinds of fundraising numbers,’ and online fundraising is a new component to political campaigning.”

Neil said in the political machine, they are beginning to see an increased focus digitally across all levels of politics of federal, congressional, state and even local. She said the growth can even be seen in presidential campaigns.

The Missouri Times announced their list of honorees at the beginning of September and held a dinner later in the month. Neil said she was surprised to learn she was given this award, as it is a big award in Missouri politics.

“The publisher, Scott Faughn, gave me a call,” Neil said. “[He said], ‘hey, I wanted to let you know that we've selected you to be on our 30 under 30 list,’ and I was like, you gotta be kidding me like there are so many people who work campaigns and in Missouri politics."

She said she feels humbled to have graduated from Southeast with the experiences she had and encourages others to take those opportunities, before and after graduation.

“I think one of the easiest ways to advance yourself in your career is to do what no one else wants to do,” Neil said. “Digital and politics are two industries that are growing so fast and rapidly, that it's hard to keep up with. So make yourself available. Be willing to do the work. Politically get involved. It really goes a long way, and you learn a lot.”