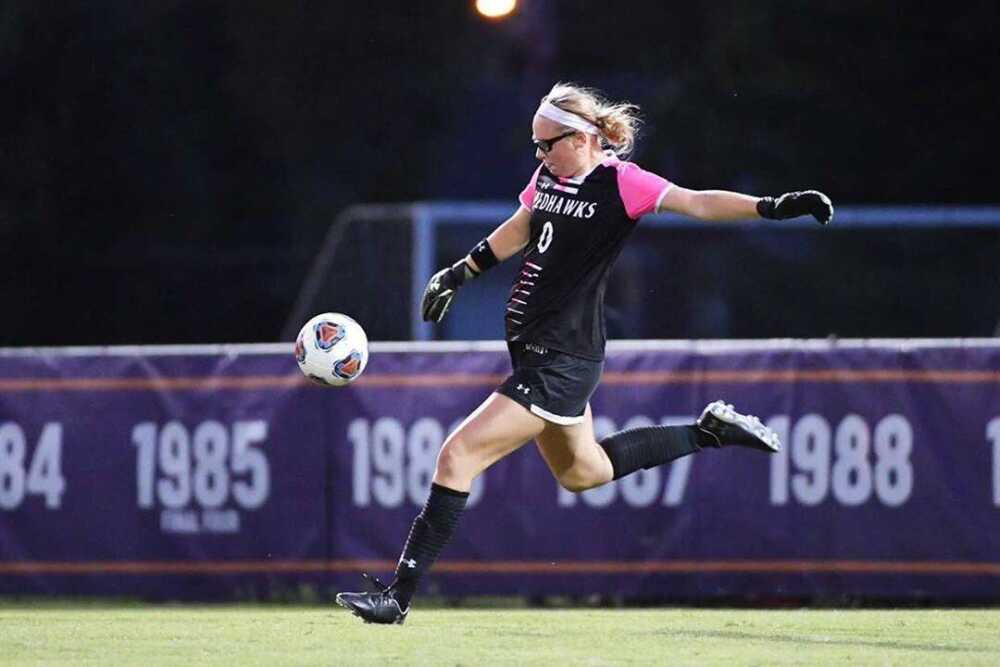 Junior goalkeeper Bailey Redden clears the ball to the offensive end for the Redhawks.
Photo submitted by Bailey Redden

Junior goalkeeper Bailey Redden has been key to the Southeast women's soccer team’s success over the past two seasons. In 2019, Redden posted a 1.41 GAA in 17 games.

Redden ranks third in career record save percentage among Redhawk goalkeepers at .831%. During Redden’s freshman year, she posted four shutouts, was named Ohio Valley Conference Goalkeeper of the week, 2018 OVC All-Newcomer Team. During her sophomore year, she became an OVC Conference Champion.

Redden started playing goalie when she was in the eighth grade. She credits her height as a key factor to why she became a goalie.

“As I started getting older, I started becoming taller than all my teammates,” Redden said. “Slowly my coaches were like, ‘We could use your height in the goal,’ so that's how it happened.”

When she graduated in 2018, she was ranked the 14th-best goalkeeper in the state.

Despite her accomplishments in high school and at Southeast, Redden’s sights are not directly set on gaining more awards but rather on doing the little things.

“I wouldn’t say my goals are concerned with getting more accolades or winning some award or anything like that,” Redden said. “I have to earn my playing time still, and personally, I want to work on getting better at the small things in the past that I've struggled with.”

By virtue of their position, goalkeepers are put under enormous amounts of pressure, and Redden understands how crucial the mental aspect of the game is. She said it’s one of the most challenging things to overcome.

Redden says fighting the mental battles is a long process. She is still a student of the game trying to learn more every single day.

Redden has experienced many memorable moments at Southeast, but the one that stood out to her most was the OVC Championship game in 2019, when the Redhawks defeated Tennessee Tech 3-2.

“I finally got a ring with my team which is amazing because we've been working so hard all season to win the championship,” Redden said. “It was great to just see all of our hard work pay off and all the pieces come together at the end was just awesome.”

The OVC postponed fall sports to the spring which has pushed the Redhawks title defense back a semester.

Redden said despite the pandemic-related restrictions, the Redhawks have been training hard, and the team is excited to get back on the field.

“We want to get back out on the field and start playing again,” Redden said. “We’re not feeling a huge amount of pressure right now since we have no upcoming games until at least next spring. Our main [goal] is to mold our team chemistry.”

Redden and the Redhawks soccer team look to defend their conference title in the spring. Click here for more information once the schedule becomes available.