SEMO had a golf team? A look back at teams of the past 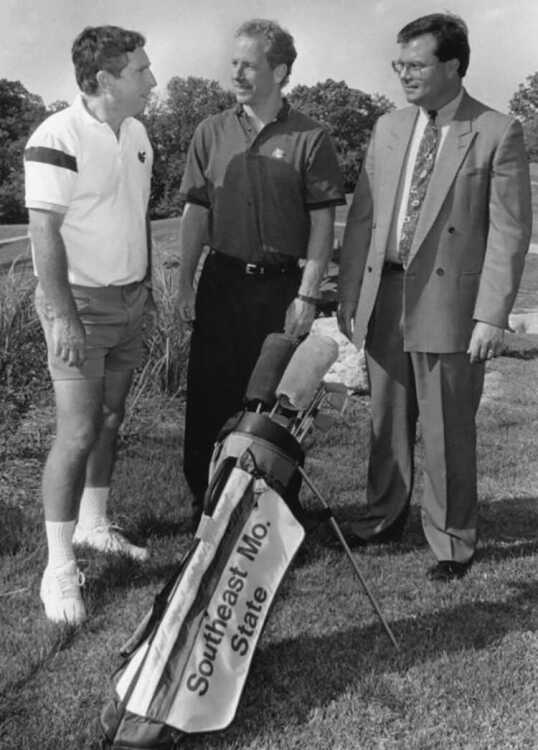 We are now 15 years removed from a time when Southeast had a team in one of the lesser-advertised college sports — golf.

In the spring of 2005, the Southeast Board of Regents ended the school’s golf program for the second time, after they first ended it in 1975. The program was refounded in 1990, one year before the university joined the Ohio Valley Conference and Division I.

Carroll Williams, a man who has had no shortage of involvement at the university, served as the Redhawk golf coach for a total of 23 years (1968-75 and 1990-2005). Williams said he was disappointed after the team was decommissioned the second time.

“Our kids all had good GPAs, and two or three of them had been OVC Scholar Athletes of the Year,” Williams said. “I was at the university for 50 years at that point, so I figured that was long enough for me, and I retired at the same time, [the team] retired.”

Some of Williams' fondest memories of the golf team are times when he was able to create a teaching moment out of a bad situation. For example, one of the teams Williams coached was sitting three strokes back at the start of the last day of a tournament in Nashville, Tennessee. Nine holes in, and the Redhawks had secured a three stroke lead, but a lightning delay stopped play for just long enough that the course managers decided to cut the tournament short. The rules stated the previous day's scores would decide the tournament, meaning Southeast lost after fighting back.

“It was kinda hard to take, but there was a great lesson to be learned,” Williams said. “Our kids were upset and disappointed, and they felt they’d been robbed. All you can do is control what you do.”

Williams said a big part of coaching college golfers was teaching that mindset. To be a good high school golfer, you had to have a lot of your skill already, Williams said, but the students wouldn’t always have the mental side of the game down.

“Think about how many 17-18 year-old kids there are who miss a shot, and bang, they’ve lost their composure.”

The team employed sports psychologists who would focus on the mental aspect of the game. Williams said he wanted his players to focus on what they did wrong and how to correct it, instead of feeling self-pity.

“In golf, it's not whether something bad will happen to you, because it always does,” Williams said. “Gary Garner was one of those great basketball coaches with a great saying, ‘It’s not what happens to you, but how you handle it.’”

Williams is currently the principal at Lynwood Chrstian Academy and still teaches life lessons to his students.

According to Kent Phillips, a former Southeast golfer (1999-2004) and current coordinator of facilities and event management for SEMO athletics, the team averaged 10 golfers at a time during his career and played year-round.

Phillips was not on the team when it was decommissioned but was serving as an assistant coach and graduate assistant for the athletic department at the time. He was disappointed with the decision, just as his coach, WIlliams, was.

The team would pack into a van on Sundays to travel to tournaments and be back on Tuesday for school. Phillips said travelling with the team are some of his favorite memories.

“You’re playing golf with your best buddies, so that's always enjoyable,” Phillips said. “Some of the guys I played with are still my best friends today.”

Phillips remembered some of the lessons Williams taught the team, including getting off to a good start and making sure your emotions were in check.

“Our typical day at a tournament was waking up at six for breakfast, getting to the range at seven and teeing off at eight,” Phillips said. “You got done about six or seven at night and you’re back on the range the next morning. It was a long day, so he was big on keeping your emotions in check and making sure you don’t get too up or too down.”

SEMO is one of the only teams in the OVC to not have a golf team at the moment, and Phillips said he hopes to see the sport return to Southeast in the near future.