The Arrow hosts debate between College Democrats and Republicans 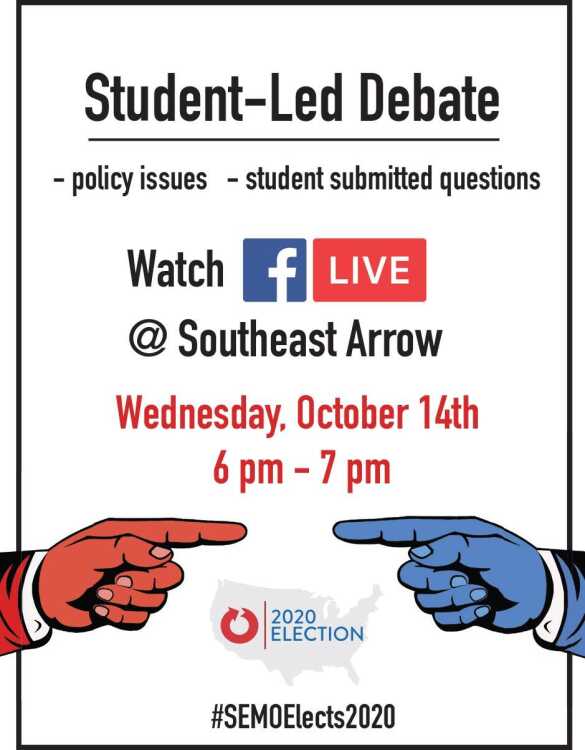 The debate is the first of three events in the Arrow’s 2020 Election coverage. The second will be the print edition ahead of the election, and the third will be the Election Night coverage itself.
Graphic by Miriam Gorecki

It is the first debate held by the Arrow.

The event will begin at 6 p.m. and is expected to last till 7 p.m. The debate is set to be held in Rose Theatre and broadcast live over the Southeast Arrow Facebook page.

“I decided to participate because I wanted to present the issues that affect nearly all of us,” Tibbs said.

He said good civil discourse is an “essential part of our system of government.” Tibbs said he hopes the debate will help viewers in their decision come Election Day.

“When we stop communicating and debating, democracy suffers,” Schumer said. “I am very proud that we are doing this.”

Schumer said it is timely and important to discuss political issues, “especially [with] those we disagree with.”

“The most satisfying thing about politics for me is when people from different ideologies can agree on something, even small issues,” he said.

Arrow Editor Lucas Irizarry said, “I think the debate is a good way to bring together the Republicans and Democrats in a more civil way than the presidential debates.”

The event will be moderated by Clayton Hester, Allison Otto and Martin Woods. It will be hosted by Ashlynn Wyman, host of What’s Up SEMO.

“The student-led debate, hosted by the Arrow, is a great opportunity to come together as a student body and have a discussion about the political issues that can so easily have an effect on our future,” Otto said.

Questions will cover current events on various topical issues, including the pandemic, the economy, and the Supreme Court. Each team will have three minutes for their initial answer and two minutes to respond to the other side.

Ahead of the event, students can submit questions for use by the debate moderators via any of the Arrow’s social media. Posts about question submission will be released soon.