Paving the way: the team immortalized in SEMO history 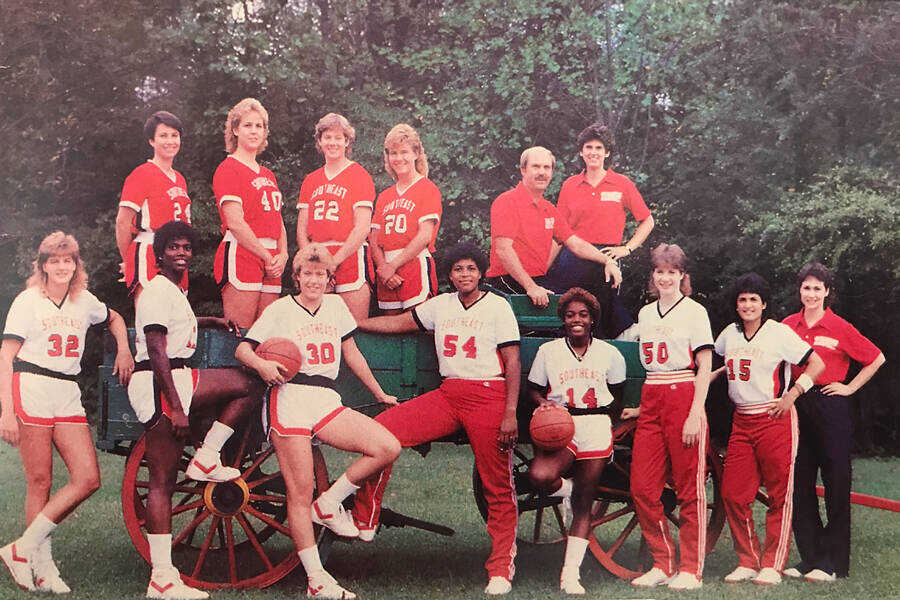 The members of the 1986-87 women’s basketball team pose for a team photo.
Photo submitted by Southeast Missouri State Athletics

The 1986-87 Southeast women’s basketball team is set to be enshrined in the Southeast Hall of Fame. The ‘86-’87 team joined five other new members in the 2020 induction class. The team featured four seniors which included Pat Colon, Stephanie Williams, Sherri Shirrell and Sandy Heitschmidt and was coached by Ed Arnzen.

“The seniors were not just good players, they were also good leaders,” Arnzen said. “One of the things I’m most proud of is what they’ve become after they graduated.”

Assistant Coach Alicia Polson Scott said Arnzen was not only her boss, but her mentor.

“I met Ed, I saw the program, I saw they won, and I fell in love with the place,” Scott said. “I knew when I left that interview if he offered me the job, I was gonna take it.”

Scott said coaching with Arnzen didn’t feel like a job, but it felt like family, and she credits him for creating that culture within the program. 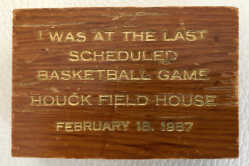 The 1986-87 season marked the last season played in Houck Field House. Members of the team were given a piece of the bleachers commemorating the last game at the field house.
Photo by Jill Pizzotti

Jill Pizzotti, a sophomore at the time, said when she looks back on her years at SEMO, she always remembers the great team chemistry the group had.

“I can remember being in Dearmont and talking about goals,” Pizzotti said. “I remember challenging each other like, ‘How many rebounds are you gonna get in the game tomorrow, Sandy?’ ‘Stephanie’s gonna lock down whoever she’s gonna lock down and [have] however many assists.’ It was never a situation where any individual was trying to score 20 points to be the leading scorer.”

Shirrell said one night, one player could be the go-to player, and the next, it could be someone else.

“We all shared in the pride of what someone else had achieved on any given night,” Shirrell said.

Pat Colon said the biggest rival of the Redhawks at the time was the Central Missouri Jennies.

“Coach always told us, ‘We have to take it one game at a time, ladies,’” Colon said. “We were always looking forward to either going to beat Central Missouri at Central Missouri, or bringing them here and beating them at home.”

Angela James, a freshman that season, echoed Colon’s thoughts about the Jennies and said after all these years, she even still has a hard time saying the word “Jennies.”

“That was like the No. 1 nemesis of SEMO during the Division II era,” Poindexter said. “When I go on [Interstate 70] to Kansas City and see the Warrensburg sign, that’s still in my head.”

A Freshman on the 86-87 team, Michelle Hornecker, said the induction is an honor to her, to be a part of a team that is considered one of the best in program history.

“I really love Southeast, I love Cape Girardeau — it’s just a wonderful town,” Marlow said. “Just to be a part of that and know that it’s going to go down in history and that I’ll always be a part of one of the better teams in Southeast history, it’s just an honor to be considered.”

Sandy Heitschmidt feels that the ‘86-’87 team was the beginning of the success for the program and made other players want to come to Southeast.

“We worked hard, we got noticed, we moved up in rankings, and it’s those things that get other student athletes to want to come to that school,” Heitschmidt said. “I’m very humbled that we’re being acknowledged.”

Details for a ceremony will be announced at a later date. To see the date of the ceremony when it’s announced, click here.