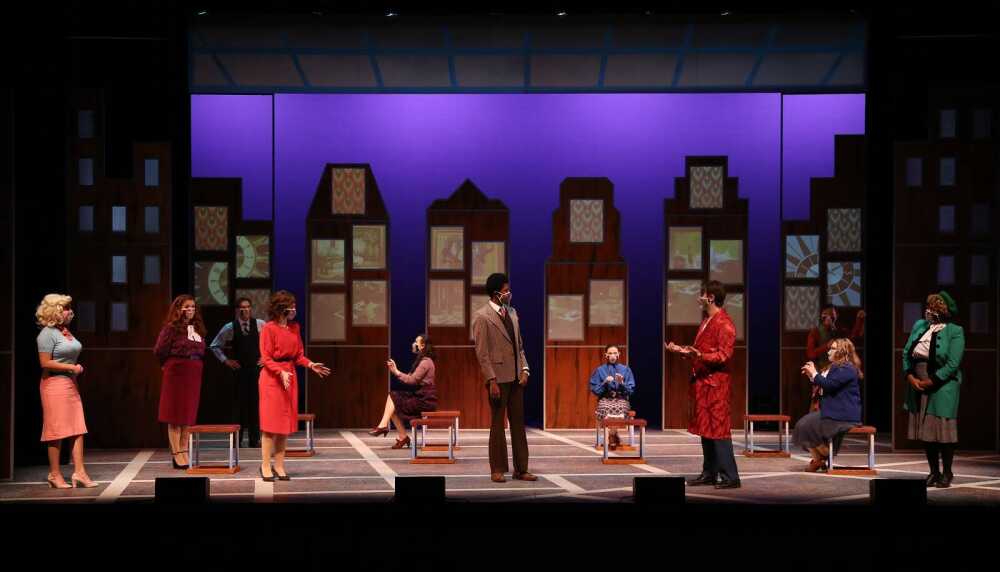 The company of “9 to 5” performing their socially distant finale.
Source: Mary K. Cook

Performers from the Jeanine Larson Dobbins Conservatory of Theatre and Dance presented “9 to 5” from Oct. 1 to Oct. 4. Social distancing guidelines presented some challenges with putting on the production.

The Bedell Performance Hall holds 900 people, but with social distancing practices in place, a “full house” is 200 hundred people. The audience was instructed to wear their masks at all times and could only leave and return to the theater during intermission.

“9 to 5” centers on three women, Violet, Judy and Doralee, getting revenge on their boss who displays sexist behavior. The office setting made for some interesting staging choices. Minimal set pieces could be seen on stage, with the actors simulating the tasks they did with their hands.

All performers wore clear plastic masks to show their mouths. Each mask corresponded to their costumes and changed to correspond with the genre of music. For example, roses attached to the masks represented tango, while fringe represented the country style of music and dancing.

Minimal costume changes for the leads made them stand out, and they kept socially distant onstage, even when dancing.

“There is a lot of intimacy … making it a challenge to block that from six feet or 12 feet apart but … the actors have a lot of chemistry … so that was able to make it work,” Production Stage Manager Mary K. Cook said.

All ensemble parts were pre-recorded, using projections onstage to limit the number of actors. River Campus bought the rights to the soundtrack, eliminating the use of a live orchestra.

“[The projection] was a fun part because you see a lot of projection in Broadway shows, but you don’t see it a lot in colleges,” Cook said.

The dances created some interesting images. Partner dancing was simulated — the actors held their hands out just enough to show that they danced together.

Rehearsal for the production presented a challenge for the actors who sometimes had two or three different understudies in case someone became sick or tested positive for COVID-19. Rehearsals continued in the Bedell Performance Hall.

The River Campus will host its first gala season opener with a concert of Beethoven’s works Oct. 12 and 13 and a percussion fall ensemble concert will be held Oct. 22. Tickets can be bought at the River Campus Box Office.