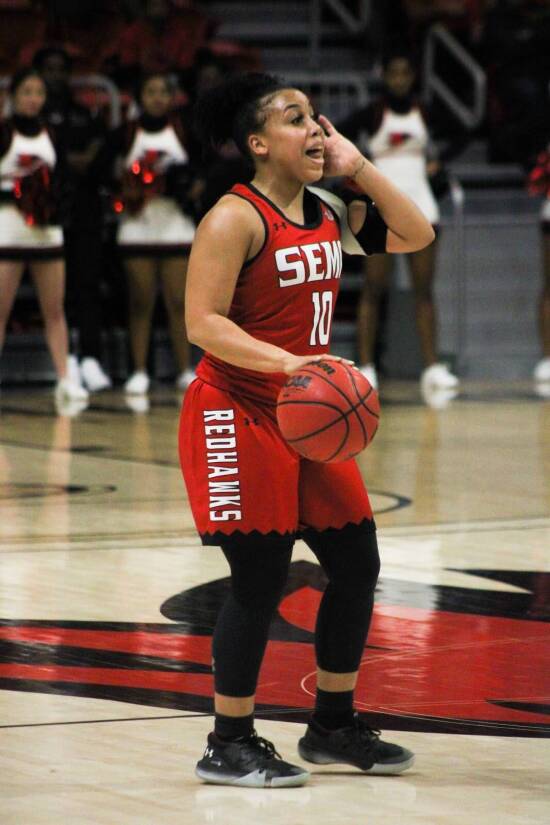 Taelour Pruitt calls a play during a game against UT Martin on Feb. 13, 2020 at the Show Me Center in Cape Girardeau, Missouri.
Photo by Ramond Buck

With seconds remaining in overtime of the OVC Tournament finals, junior guard Taelour Pruitt ended the game with a three-pointer to lead their victory over UT Martin.

Despite having shoulder surgery and recovering from injuries in May, Pruitt is determined to get back in her groove for another successful season.

“Training this season has been totally different. I’m trying to build my strength back while balancing the food I intake considering I haven't been able to condition like I usually would,” Pruitt said. “I want to make sure I am healthy 100% for my team.”

As a voice for women’s basketball players on key initiatives and various issues, Pruitt

was chosen to represent Southeast Missouri and the OVC in the Student-Athlete Engagement Group.

The Student-Athlete Engagement Group consists of current student-athletes from each of the XXXII conferences that make up Division I basketball. Pruitt has the opportunity to serve in the group for two years.

Adapting to new teammates and their game can sometimes be challenging. Pruitt aspires to step up her leading skills for the upcoming season.

Southeast coach Rheka Patterson says Pruitt is someone the team will follow.

“She’s been in the system for some years. She knows how to win a championship and what it takes,” Patterson said. “I think she speaks from the heart, and she’s very even keel.”

Pruitt’s Adversity may be more intense than what other athletes may face, but the key to being successful is learning to overcome those obstacles.

“Dealing with referees can be challenging, but sometimes you just have to deal with it for things like that,” Pruitt said. “I feel like we had adversity a lot with different teams, but we

prepare for things like that in practice. So during the games, it’s expected, so it’s not as hard to climb that wall to get over it.”

As point guard, it’s important to withstand and understand the leadership role towards the team on and off the court.

“[She] was a little bit of a captain in training last year as Carrie Shepard would call her,” Patterson said. “I expect her to be a little more vocal this season because she is older, and there would be a void in that this season with the loss of seniors.”

The women’s basketball team is looking to defend their Ohio Valley Conference Tournament title beginning in either late 2020 or Spring 2021.