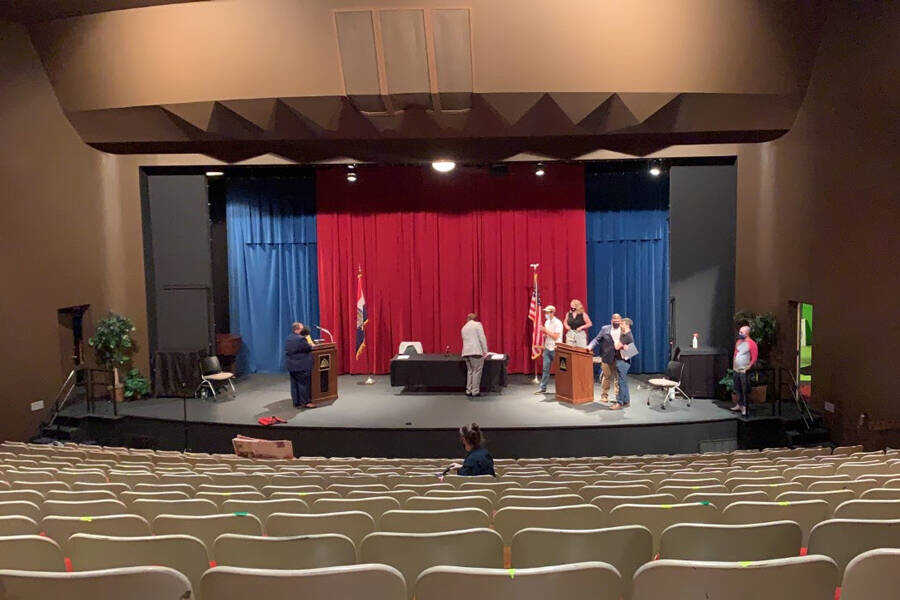 The Arrow staff sets the stage before the debate on Wednesday, Oct. 14.
Photo by Lucas Irizarry

The Arrow hosted their first-ever debate Oct. 14. Students moderated the debate, and student representatives from the College Republicans and Democrats debated ideas on a variety of subjects.

According to Moderator Clayton Hester, the event was born out of a conversation he had with a student Democrat, Ethan Schumer.

The debaters took on a variety of topics, including COVID-19, absentee voting and the Amy Coney Barrett Supreme Court hearings. The debaters found common ground on some of these topics, agreeing with each other's ideas and stances.

“We all have our own policy preferences and our own political differences, but I think the debate was a good way to show that we can still come together on a lot of different things,” President of College Republicans and Debater Reagan Tibbs said.

According to Hester, the debaters were given the general idea of what questions would be asked so they could prepare for the event but weren’t given full questions in advance to allow for spontaneity of answers and allow for changes as the political climate shifted.

“We spoke to them generally about what kind of areas we were going into, but never anything in terms of actual concrete questions,” Hester said. “Some of that even shifted up to the night of the debate, because of the fact that so much was happening that week, and so much is still happening.”

The debate was originally planned to be held on one camera and streamed to Facebook Live, but by debate night, the event had evolved into a three-camera production with TV/Film major Lucas Ruessler directing and Culture Editor Sophia Davis running the soundboard.

“I’m in MC429, and I’m a TV/Film major as well, so I already had a lot of experience directing shows, so it was just kind of a natural thing for me to jump into,” Ruessler said.

The Democratic and Republican debaters agreed everyone needs to get out and vote on Nov. 3. With such a controversial election, including rising tensions between parties across the country, both sides cited voting as being a citizen's most important civil duty.

“Going to vote is very important, and we have that luxury in the United States, and we shouldn’t let it go to waste,” Tibbs said.

According to Democratic Debater Camille Shoals, everyone, not just college students, should be coming up with their “voting plan.”

The debate marked the beginning of the Arrow’s election coverage. The Arrow will be live in Cape Girardeau and Jackson at the Republican and Democratic watch parties, giving live updates on all social media platforms.