Results from the Arrow mock election 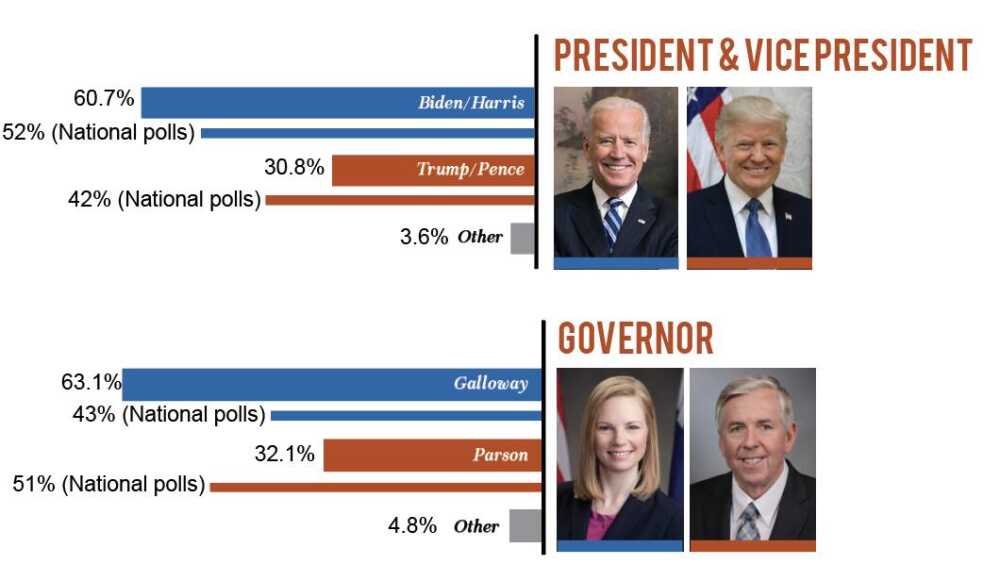 Graphic by Ally Bruemmer, Photos from the US Government

As part of the Arrow’s ongoing election coverage, we released a mock election poll to members of the Southeast community. The poll covered a range of topics from the national and Missouri ballots, including the presidential election.

The poll was answered by 331 Southeast students and staff.

An overwhelming majority of voters were Missouri residents at 78.5%.

More than 92% of voters said they plan to vote in the presidential election, and 70% said this is the first time they could vote in an election.

Our presidential mock election was won by Democratic candidates Joe Biden and Kamala Harris in a landslide, with the duo picking up 61% of the vote.

This is congruent with polls by Fox, CNN and NPR, who all have Joe Biden receiving upwards of 52% of the vote.

These results do not line up with how Missouri has voted in the past. The state has voted for the Republican candidate in the last five presidential elections and is expected to swing that way again.

Donald Trump and Joe Biden received 30% of the vote in our poll, and the field took up the last 10%.

A majority of voters in our mock election voted Democratic again for governor. Nicole Galloway won 63% of the vote, defeating incumbent Republican Governor Mike Parson by nearly doubling his 32%.

The governor race in Missouri can typically go either way between parties. Democrats and Republicans have each won six of the past 12 elections.

Parson, who was lieutenant governor at the time, took over as governor in 2018 for Eric Greitens. Galloway is the Missouri state auditor and is the only statewide-elected Democrat in office at this time.

In a collection of credible polls compiled by FiveThirtyEight.com, Parson has won every one since June of this year. 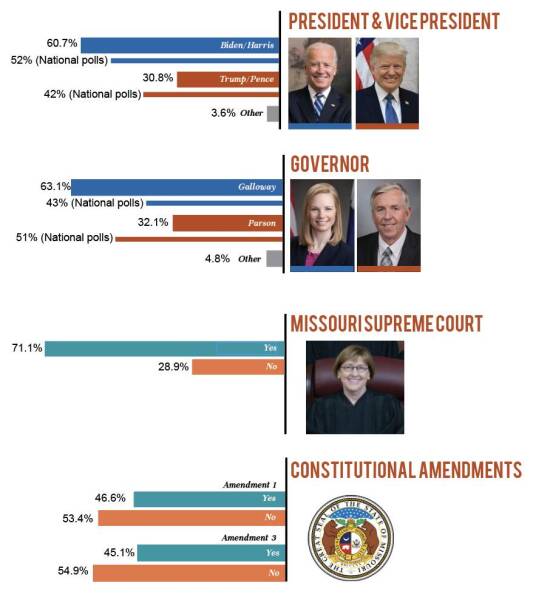 Graphic by Ally Bruemmer, Photos from US Government

Judge Patricia Breckenridge won her retention election in our poll, with voters voting for her 71% of the time. If 50% of voters vote no, then she would be removed from office.

Breckenridge received a 4.29 and above on all aspects of the poll put out by the Missouri Bar Association to lawyers to evaluate her. 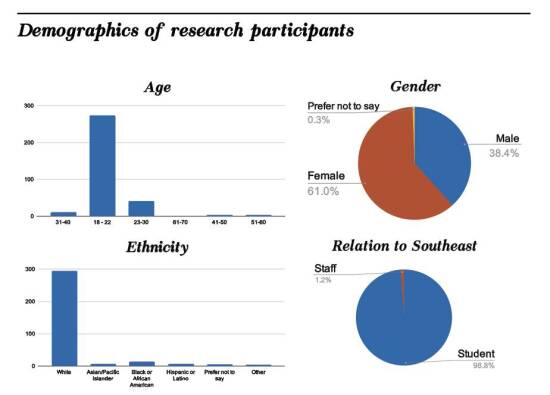 Our poll saw no amendments to the Missouri constitution getting approved.

Amendment 1, which would add a term limit to the positions of lieutenant governor, secretary of state, auditor and attorney general received a 55% vote to not amend the constitution. Amendment 3, which would change how the state redistricts voters, received a 53% “no” vote.

The Missouri constitution has been amended 126 times since its creation in 1945. That ranks as 11th-most among all states.