Confused about the judges up for election? You’re not alone 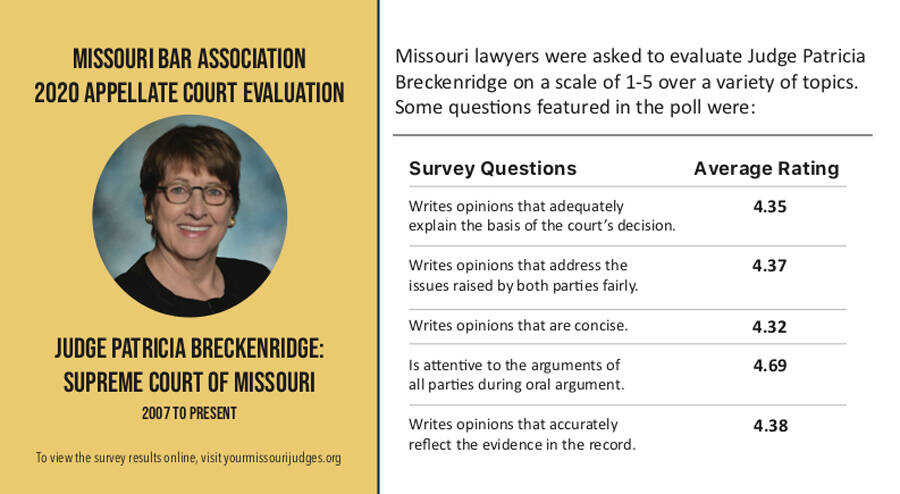 One of the more enigmatic elections on this year's Missouri election ballot is the retention election for Judge Patricia Breckenridge of the Missouri Supreme Court. Sounds important, doesn’t it?

Don’t worry if you don’t know how to vote when you arrive at that question — most Missouri residents won’t know, either. According to Laura Hatcher, associate professor of political science, the judicial branch of government is usually the one people know the least about. She said the main reasons for this are that there's so much technicality happening behind the scenes, and the US Supreme Court is publicized much more frequently than any other court.

Let’s start with what exactly a retention election for a state judge is. Retention elections occur in different years for each judge. The first happens one year after they take office. This election allows the people to have a say on if a judge should continue to serve, as they are appointed to office by a nominating commission and the governor. If the Missouri Supreme Court judge is retained by a majority of the popular vote, then they go on to serve 12-year terms and are up for retention at the end of that term. This is the case for Breckenridge, who took office in September 2007.

These elections are what are known as nonpartisan, meaning the judges don’t run against someone — they run against their own record and reputation. Judge Stephen Limbaugh, a former Missouri Supreme Court judge (1992-2008), said it is uncommon for judges to lose their retention election. However, as recently as 2016, there was a concerted effort to stop Judge Richard Teitelman from winning his retainer.

“There was an organized effort not to retain him,” Limbaugh said. “There were radio and newspaper ads and so forth against him. The Missouri Bar Association backed him, and he was retained in office.”

Judges don’t usually campaign for retention elections, and in fact, the nonpartisan court plan was created so judges would not waste their time vying for re-election.

According to the Missouri Court system website, in the 1930s, the public became dissatisfied with the role of politics in selecting judges. In November 1940, the Nonpartisan Selection of Judges Court Plan was adopted in Missouri to put a stop to judicial control from outside forces. The plan is often called the Missouri Plan, since it was developed here. It has been adopted in 30 other states.

Every time a judge in the state of Missouri comes up for election, the Missouri Bar Association publishes surveys of practicing lawyers to help educate the public on whether a judge should be retained. The surveys ask the lawyers to rank the judges on a scale of 1-5 on different aspects of the judge’s skills and temperament.

Judge Patricia Breckenridge’s ratings can be found here. She ranks at a 4.29 and above in every category, which Limbaugh said is “very good.”

“Supreme Court judges get rated a little bit lower than most judges for the reason that they have to deal with the most difficult and controversial cases,” Limbaugh said.

Limbaugh and Hatcher agree the Missouri Bar Association surveys are the best way to get educated on whether a judge should be retained. Limbaugh said the surveys were more publicized in the past versus today.

“I’m afraid that a lot of newspapers don’t have the space to put all that information in, and it’s unfortunate,” Limbaugh said. “These judicial evaluations would be helpful to people.”

For more information on every judge up for election this year visit yourmissourijudges.org.