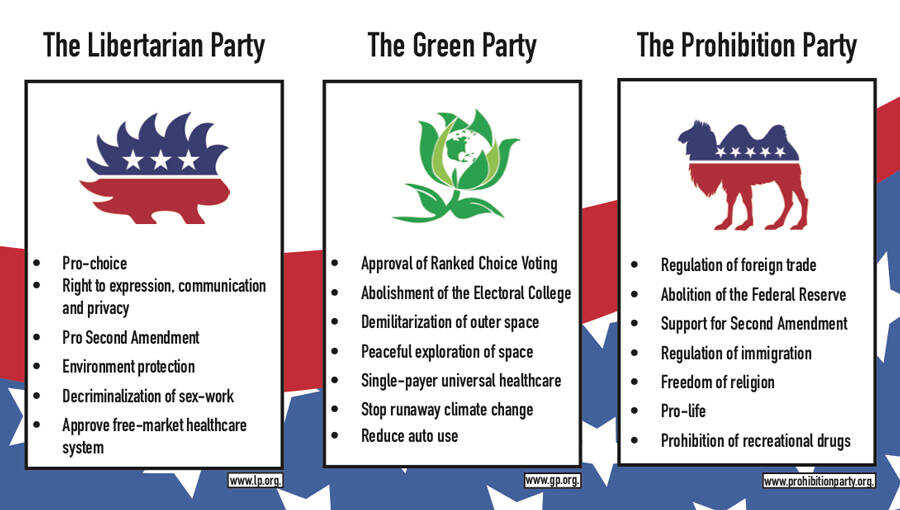 Seemingly now more than ever, politics are severely divided among Democrats and Republicans. What some either forget or don’t know is that America doesn’t have a two-party system — there are other choices. Third parties, or minor parties, are a unique part of American history that are often forgotten. With enough support and a solid candidate, a third party candidate can get in office.

The history of third parties

American democracy in and of itself is ever-changing, so it’s no surprise third parties tend to change frequently, as well, both within the party itself and which party is most prominent.

According to Independent Voter News, in the early stages of developing American democracy, there were more than just the Democratic and Republican parties. The popularity of these alternative options grew in the late 1800s.

In 1912, Theodore Roosevelt made third party history by being the first — and only — presidential candidate to receive more popular and electoral votes than a major party candidate. Though Roosevelt came in second place, it was a win for minor parties’ voices to be heard.

1968 was the last election year where a third party won an electoral vote and at least one state. American Independent Party candidate George Wallace won 13.5% of the popular vote, five states and 46 electors in the Electoral College.

Today, many elections — both state and national — are affected by third party candidates. These parties can swing elections, and with enough support, can sway elections in their favor.

There are many third parties. They can be right-winged, left-winged, moderate, single-issue oriented, ethnicity oriented, state-only parties, etc. Here’s a look at the major third parties to look at for the 2020 election season.

Founded in 1971, the Libertarian Party has become increasingly popular, with recent presidential candidates consisting of Gary Johnson and Jo Jorgensen.

Associate Professor of Political Science Jason Sides said the Libertarian Party is the best-organized and best-funded of the alternative parties that exist today and tends to do better in local governments.

“You’ll see that they have a higher record of getting folks elected to the local level. They tend to do better in places where there are a higher level of college-educated people who are financially secure,” Sides said.

The Libertarian’s platform, according to their website, lists they believe in a right to expression, communication and privacy; they are pro-choice and oppose the administration of the death penalty by state; they are pro-Second Amendment; they want environment protection; they believe in the decriminalization of sex work; they oppose government regulation of energy prices, allocations and productions; and they approve of a free-market health care system.

For more information about the Libertarian Party and to see their full platform, visit https://www.lp.org/.

The Green Party of the United States

The Green Party of the United States found its start in 1984 when the party first formed in Maine. By the mid-1990s, state-level Green Parties came together to form the national-level party. Through many name changes and different groups forming, the GPUS now stands as a party focused on helping the environment both locally and nationally.

According to Sides, the Green Party works toward a more humane economy.

The GPUS platform, according to their website, lists that they want the approval of Ranked Choice Voting and abolishment of the Electoral College, to eliminate ballot access laws and rules, and to demilitarize outer space. They want peaceful exploration of space, to enact single-payer universal health care, to stop runaway climate change, to reduce auto use and to transition away from fossil and nuclear power toward cleaner, renewable, local energy sources.

To find out more and to read the GPUS’s full platform, visit https://www.gp.org/.

The Prohibition Party began in the late 19th and early 20th Centuries. It is the oldest existing Third Party, and the third longest-running party in US history.

The biggest impact the party has made is passing the Prohibition Act (1920-1933), which banned the sale and consumption of alcohol. While the act inevitably got overturned, the party remains intact and continues to develop.

Today the party is focused on public morality, stating in their preamble “... With faith in the teachings of the Lord Jesus Christ, do hereby pledge to serve the needs and to preserve the prerogatives and freedoms of the citizens of the United States of America.”

The Prohibition’s platform, according to their website, lists they want to enact a regulation of foreign trade and abolish the Federal Reserve System. They support Second Amendment rights and want to form more regulation on immigration and support asylum. They believe everyone has the right to freedom of religion and to practice religion anywhere. They are pro-life, against both abortion and capital punishment. They want to enact a prohibition of recreational drugs, including alcohol and tobacco.

To learn more about the Prohibition Party and to see their full platform, visit https://www.prohibitionparty.org/.

Can a third party win a presidential election?

So far, no third party candidate has won a presidential election. This is due to several reasons, one being, according to Sides, that third parties have a hard time picking candidates.

“They often have trouble recruiting candidates with a lot of name recognition,” Sides said.

Funding is also a major issue. For a party to obtain federal funding, Sides said the party must reach a certain vote threshold.

“You have to get enough votes to show that you are a viable alternative,” Sides said. “And that’s hard for a third party to do.”

Third parties have had a hard time getting into presidential debates. President of the College Republicans at SEMO Reagen Tibbs said the requirements for entering into debates create barriers for minor parties.

“The Federal Elections Commission requires that a candidate be constitutionally eligible to serve as president, appear on enough state ballots to have a mathematical chance of winning the electoral college, and have at least 15% support nationwide in at least five credible nationwide polling organizations,” Tibbs said.

Because of these obstacles and barriers, third parties tend to emerge quickly, then fall away.