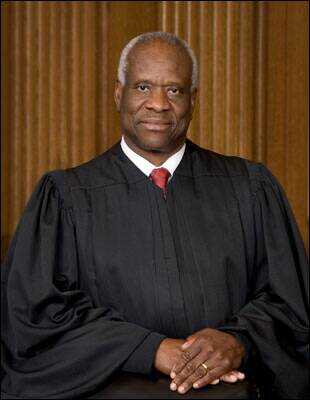 Despite prominent political and social controversy, Clarence Thomas’ appointment to the United States Supreme Court was confirmed by the United States Senate Oct. 15, 1991. Thomas is currently the longest-standing judge with a tenure of approximately 28 years.

The documentary covered Thomas’ journey from his humble upbringing in Georgia to his first job to his appointment to the Supreme Court.

Before Thomas decided he wanted to pursue law, his grandfather encouraged him to pursue a religious lifestyle. Thomas attended St. John Vianney Minor Seminary, the first step to becoming a Catholic priest. His story shifted after the assasination of Dr. Martin Luther King, Jr. in 1968.

Holy Cross College was Thomas’ next venture. There, he established a Black Student Union and campaigned for civil rights. After college, Thomas went to Yale University Law School where his political views became more conservative.

In the documentary, Thomas shared he mainly pursued a career in law because of his grandfather’s fear of “running into the law.” He suggested his grandfather could not “win” in any legal situation as an African American male in the 1950s.

Upon graduation from Yale University Law School, Thomas accepted an assistant position for Republican Missouri Attorney General John Danforth. The documentary continued sharing Thomas eventually worked for President Ronald Reagan, paving the way for a seat on the United States Court of Appeals before he was appointed to the Supreme Court.

Event organizer and Turning Point USA Chapter President Ethan Protzel said the documentary has many stories both Southeast Republicans and Democrats should be willing to hear.

“I think it's important to stay vigilant about what is going on in our country whether you’re on the left, right or somewhere in the middle and to be open to things that are surprising,” Protzel said.

As an African American Republican, Thomas’ perspectives and views are polarizing in today’s political climate. Protzel said Thomas shouldn’t be seen as a controversial figure.

“I don’t think his story is controversial at all. It is just a great story of humble beginnings,” Protzel said. “Especially as an African American in the ‘50s and ‘60s, he has an incredible story.”

“Hopefully, people will take away that they should not be afraid to be independent thinkers. That they can be their own person and think freely for themselves without being liberal or conservative.”