Art From the Heart: An exhibit informed by emotion and history 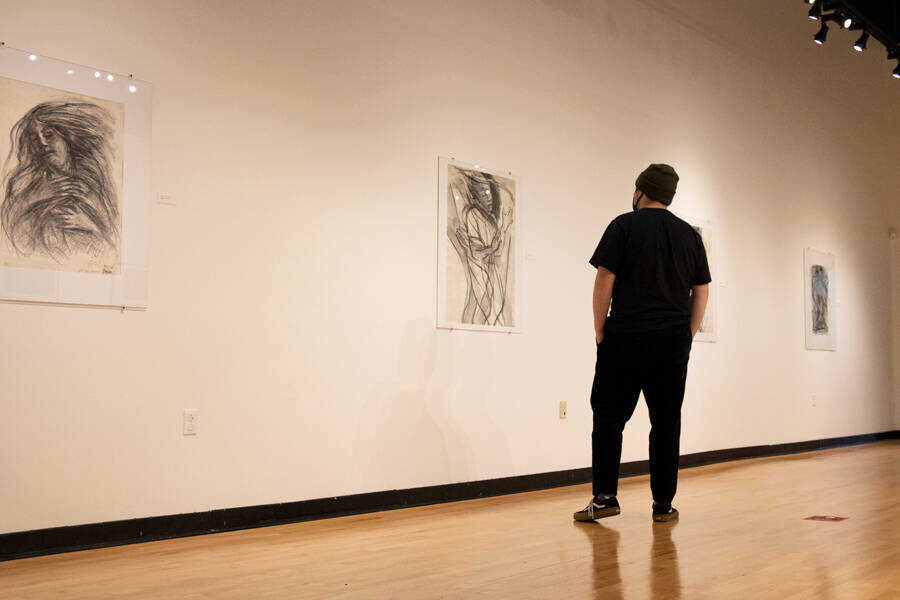 Senior, John Stringer walks through the "Art From The Heart" gallery at Crisp Museum. October 8, 2020.
Photo by Jan Salmon

Walking into the Art from the Heart exhibit at Crisp Museum, one views several pieces reflecting different states of mind from having passion to being haunted. These art pieces are informed by the experiences of their creator, Robert F. Harding Jr.

“You see those movies where they depict a lot of Italian people as part of the mob, but for the most part, that simply isn’t true. Not every Italian was involved in the mob,” Harding Jr. said.

Once World War II started in 1941, Harding Jr.’s father was drafted into the service at the young age of 19 after he volunteered for the draft.

“The British, the Irish, the Scots — most of those people were very patriotic in those days. So, my dad was a patriot, and in those days, patriotism wasn’t a sin,” Harding Jr. said.

In July 1944, Harding Jr.’s father was involved in the Battle of Saint Lo. The place was captured by infantry divisions of the US's military including the 29th, which Harding Jr.’s father was a part of. By the time the war was over, most of the place was demolished. But a building by the name of Chapelle De La Madeleine still stood. Later in life, Harding Jr. had a sculpture dedicated to his dad just outside of the building.

Around the age of nine, Harding Jr. attended the Museum of Modern Art School for Children in New York. His teachers in grade school recognized him as a natural in portraiture. After graduating from high school, he went to Rutgers University to study art.

“At Rutgers, I got involved with Allan Kaprow. Kaprow is considered one of the inventors of ‘the happening,’ which is now known as performance art,” Harding Jr. said.

Once the Vietnam War came around, Robert F. Harding Jr. said he was going to be drafted. He started basic training in 1960. He finished his service in the military in 1962 and came back to New York, where he still lives today.

Harding also recalled witnessing 9/11 while he lived in a loft not far away from the World Trade Center.

“I heard a big banging noise like a garbage truck coming around. So I went to the front of the loft to the fire escape, and I looked at all this white stuff coming out of the sky, and there were papers from the offices in the building,” Harding Jr. said.

Harding said witnessing people jump out of the North Tower on 9/11 is one of the things that influences his art to this day.

“When people are not artists, they don’t realize that everything is about your art.” Harding Jr. said.

The Art from the Heart exhibit will be open to the public until Nov. 8 at the Crisp Museum. To find more information about Harding and his art, visit his website.