Football gears for three-peat in War for the Wheel 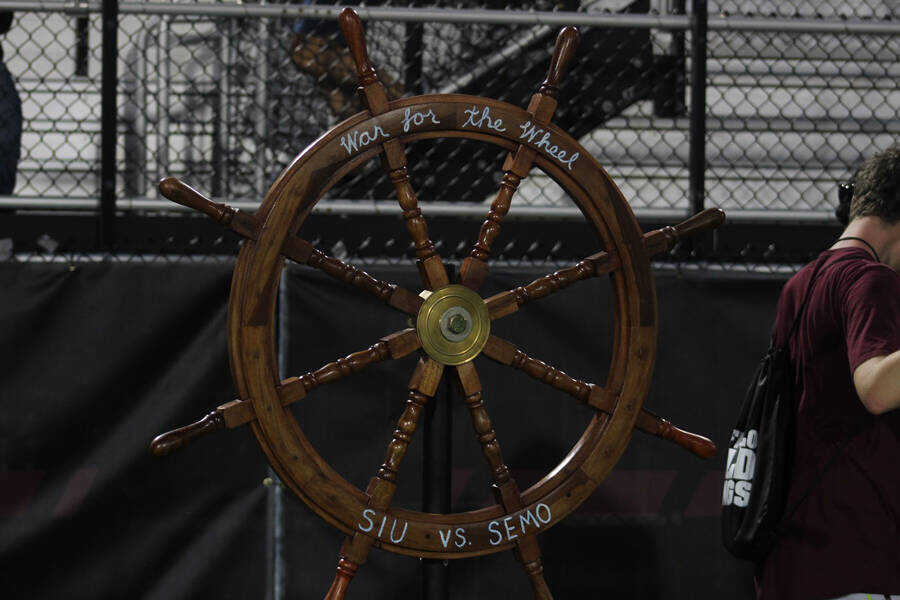 Southeast took home this antique ship wheel, which commemorates the 'War for the Wheel' rivalry matchup between SEMO and SIUC.
Photo by Zach Tate

On Sept. 15, 2018, Southeast football came out victorious in a 48-44 thriller over Southern Illinois University in the inaugural War for the Wheel in Carbondale.

With the Redhawks traveling to Carbondale on Oct. 30 for the third installment of the War for the Wheel, will history repeat itself? Southeast coach Tom Matukewicz certainly thinks so, but he knows it won’t come easy.

“We’re going to meet a really hungry football team — I guarantee it,” Matukewicz said. “They want that wheel, and they’ve used the last two years as extra motivation.”

Following the 44-26 loss last year, SIU made a change at quarterback. Then-sophomore Stone Labanowitz was benched for then-junior Karé Lyles, who went on to throw for 1,569 yards and 12 touchdowns. Lyles is back for his senior year and has plenty of offensive help.

Alongside Lyles in the backfield are sophomores Javon Williams Jr. and Romeir Elliot. The two were SIU’s first- and third-leading rushers, respectively, with Williams carrying the heavier load at 1,038 yards and 17 touchdowns, and Elliot finishing with 476 yards and three scores. The Saluki offense is capable of handling two 1,000-yard rushers, as then-senior D.J. Davis was right behind Williams at 1,026 yards.

SIU has plenty of talent returning and overall has 18 seniors on the team.

“Overall, this is a really veteran football team [that we’re facing], when you look at how many seniors they have, how many guys they have coming back,” Matukewicz said.

The Redhawks offense will have a new play caller behind center with the graduation of quarterback Daniel Santacaterina. Slinging touchdowns for the Redhawks will be redshirt-senior Andrew Bunch, who spent the last two seasons at the University of Nebraska as a reserve.

Joining Bunch in the backfield is junior Zion Custis, who rushed for 684 yards and five touchdowns, and redshirt sophomore Geno Hess, who finished the season with 575 yards and six scores. The duo will be the main ball carriers for the Redhawks, and an uptick in yardage is not out of the question with the absence of third-leading rusher Mark Robinson, who ran for 545 yards and seven scores.

“Before you can learn how to win a game, you got to make sure you don’t lose the game,” he said. “We can do a lot of really good things, but if we turn the ball over, we won’t win that game.”

Where games are won is on defense, and the Redhawks have been known for their defense over the past two seasons — especially their secondary. With Bydarrius Knighten, Al Young and Shabari Davis all returning for their final seasons, the secondary will have plenty of veteran presence and experience.

Matukewicz believes the question mark in the Redhawks defense is in the linebacking corps. Over the last few seasons, the Redhawks have “graduated some unbelievable linebackers,” including the likes of Chad Meredith and Kendall Donnerson — who both made it to the National Football League — and more recently Zach Hall, the 2018 Football Championship Subdivision’s Defensive Player of the Year.

Although Southeast lost Hall, Matukewicz believes someone will emerge as “the man.” Their two outside linebackers Omardrick Douglas and Bryant Pirtle, are both in their final seasons and bring a lot of experience to the middle level, which could potentially fill a Zach Hall-sized hole in their defense.

The biggest obstacle the Redhawks will face is not one extremely talented player or a loaded offense or an air-tight defense. Even though football is still being played, COVID-19 has an impact on this game.

“[Preparation] is a real challenge,” Matukewicz said. “When you’re talking about building a team, there’s a culture and a connection piece to it, and not being able to be together is a real problem [in developing those].”

On top of not having time to build a deeper connection thus far, the team was not able to place physical conditioning as the top priority. Matukewicz said the team had to “just start playing football,” and went almost directly into building up skills, learning schemes and learning the playbook — all in just a few short weeks.

“Sometimes, you just have to drink through a firehose,” Matukewicz said. “But our team has done a good job, doing things on their own. I think we’ve handled it as well as we could, based on the hand we were dealt.”

With just one football game scheduled for the fall and the remaining games scheduled for the spring, focus may also be an issue for the Redhawks. Matukewicz said the team is very thankful for the opportunity to play football this semester, but equated the situation to “taking a class but never having a test.”

But, the same can be said across the river. Matukewicz said the bottom line is, everyone is dealing with the same issues.

Due to an uptick in COVID-19 cases in the region, only team families will be allowed in Saluki Stadium.

The Redhawks will hit the road this year for a 6 p.m. start in Carbondale. The War for the Wheel will be streamed on KFVS 12, and there will be a watch party on Houck Field.