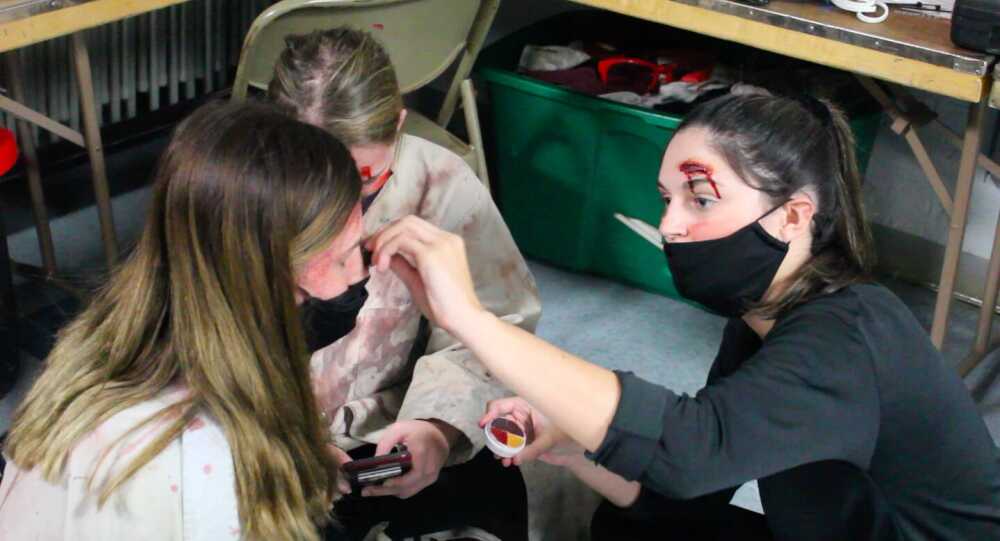 Southeast junior Caitlin Helterbrand helps other volunteers put on makeup for the 29th annual Haunted Hall of Horror at the A.C. Brase Arena on Thursday, Oct. 22, 2020, in Arena Park.
by Brooke Holford

The A.C. Brase Arena has been transformed again this October for the 29th annual Haunted Hall of Horror.

Kaed Horrell, assistant recreation division manager for the City of Cape Girardeau Parks and Recreation Department, has coordinated the event for the past six years, and said this year will look a little different due to the coronavirus pandemic and the addition of new features.

“[The Haunted Hall of Horror] goes through about every part of the arena building,” Horrell said. “We have the main floor that we do a lot on, three different tunnels that go kind of under the building, and then we actually have a little spot that goes outside as well so there’s about five different areas of the haunted house itself.”

The line may also be moving less quickly. In previous years, there would be two lines that would move almost like a “conga line,” Horrell said. This year, there will only be one line wrapping around the inside of the arena building with social distancing in between groups.

Horrell said each night of the Haunted Hall of Horror requires approximately 40 to 50 workers, and about half of those are volunteers.

This was their second time volunteering in the Haunted Hall of Horror, and both girls agreed they came back because they “had so much fun doing it the first year.”

“We’re both actually acting right in the same room with some sort of meat grinder, like one of us is going to be in the meat grinder and the other one’s going to grind,” Wind said with a laugh.

Helterbrand said since they have to wear face masks this year, they only have about half of their faces to work with, so their acting and makeup are crucial.

Horrell said several other Southeast students and organizations, such as fraternities and sororities, volunteered in the Haunted Hall of Horror.

While things may be a little different this year with the pandemic, Horrell said the Parks and Recreation Department still wanted to offer the event for people who wanted to do something for Halloween.

“This is for those people who do want to have that opportunity to be able to go out, and we’re doing our best to make it a safe environment so they can come out and still be able to have fun and have a little bit of a scare,” Horrell said.