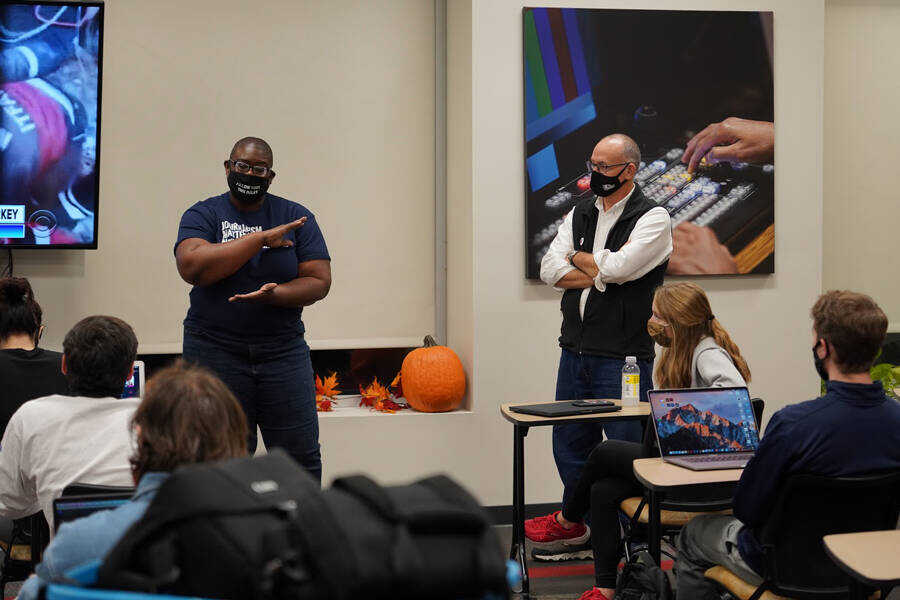 Dr. Tamara Zellars Buck and Professor Michael Simmons prep the room prior to the start of the Arrow’s election night coverage at the Rust Center for Media. The teams worked for roughly six hours before going home at midnight.
Photo by Clay Herrell

The staff of the Arrow along with the media management class taught by Instructor of Mass Media Michael Simmons worked together to provide election night coverage on Nov. 3. The teams covered elections on the local, state and national levels.

There were approximately 40 people at the Rust Center for Media in Cape Girardeau to assist with coverage. The teams worked to provide updates on all social media platforms, write briefs for the website and prepare live update videos for Facebook. In addition, teams of reporters traveled around Cape Girardeau to attend local candidate watch parties, speak with voters at polling sites and visit local newsrooms to see how they were covering the election.

Arrow Editor-in-Chief Lucas Irizarry said he was expecting unique stories from his staff. Irizarry was responsible for overseeing every aspect of the night and making sure the teams were accurate in their reporting.

“I’m looking for something you won’t find at other news stations,” Irizarry said.

Madison Stuerman and Clayton Hester served as talent for the hourly updates on Facebook Live. The duo prepared updates on the election on all levels as the night progressed.

Managing Editor Matt Wagner was the head of a travel team that attended polling sites around Cape Girardeau. Wagner said the positive reputation the Arrow has gained the past few years assisted them with finding people to speak with.

“We ran into a lot of people who already knew who we were,” Wagner said. “Everybody was willing to talk to us and tell us how their voting experience went.”

Culture Editor Sophia Davis led the brief and research team that produced content as news came out on election results. The team monitored polls from various websites that they then used as sources in their briefs.

Design Editor Ally Bruemmer led a team of four people who were responsible for creating graphics to reflect the state of elections that were being reported on during the hourly Facebook updates. Bruemmer and her team worked closely with the brief and research team to share information that assisted each team’s coverage.

Digital Editor Madison Abanathie coordinated the social media posts on the various platforms. Abanathie said the first few hours of the coverage “was a blur,” but the team settled in and did a good job of executing their plan.

“I feel like everybody did a very good job of communicating with each other,” Abanathie said. “It was very quick communication [and] really on point.”

Abanathie said despite all the work that needed to be done, the team still got the chance to get to know each other better.

“It was definitely a nice group bonding experience,” Abanathie said. “We got to know the person behind the mask as opposed to just the person you see in lecture on Thursdays.”

Simmons said he was pleased with the work of everyone involved.

“I think students did a really good job of understanding how what they were doing fit into the whole project,” Simmons said. “I was really impressed with the way the students organized themselves [and] organized the tasks for each of their individual units.”

Simmons said the teams did a good job identifying and fixing quick mistakes.

“I have to allow them to make some mistakes to find out what didn’t work, and they identified it very quickly and fixed it,” Simmons said. “From that point on, it was not like working with students, it was working with young professionals.”

The Arrow began coverage at 6 p.m. Nov. 3 and continued coverage until Irizarry called it an evening as the clock struck midnight.

To see the coverage from election night, visit the Election 2020 tab and the multimedia tab.