Students address what they won't stand for 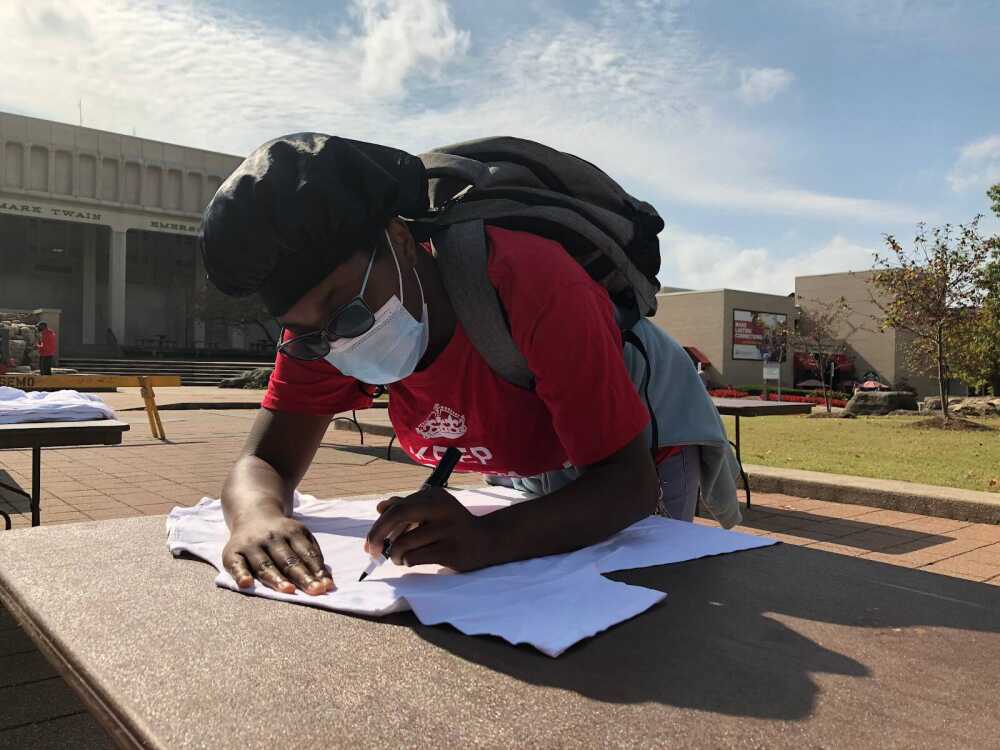 Camille Shoals preparing to write the names of the victims who lost their lives to police brutality.
Photo by Amari Bell

The National Residence Hall Honorary (NRHH) held the “I Won't Stand For…” event outside the Kala M. Stroup fountain in front of Kent Library on Oct. 21.

NRHH is a leadership-based honorary society composed of exemplary residential students who value service and recognition. Chapter members are campus leaders, hall staff members, hall council members, residents and individuals who have made a significant impact in the residence halls on campus.

Students were provided t-shirts with “I Won't Stand For…” printed on them and fabric markers to write and decorate the t-shirts. Participants were encouraged to put anything they wanted on the shirt, whether funny or inspiring.

NRHH member, Rachel Cundy, said the event is a long-standing tradition for the organization. She said it is a really great program that NRHH hosts since the organization focuses on service and recognition.

Cundy wrote she would not stand for inequity on her shirt. She said being a member of NRHH inspired her to provide the organization with an opportunity to all and serve to the best of her ability.

Other students voiced their views on the unrest happening in America right now. Camille Shoals, captain of Southeast’s debate team, participated in the event because she is afraid of racism and also shared her views on laws not being enforced properly.

Shoals wrote on her t-shirt she will not stand for racism in America. On the back she wrote, “There would be no U.S. without slave labor, give us equality, justice, and peace.” She added some of the names of the victims who had lost their lives to police brutality.

“If we can get rid of racism in America I do not have to worry about my little brother dying by the police. Despite what people may say, racism is an innate fear,” Shoals said. “No person should have to bury their child because of the state’s negligence to enforce the constitutional laws.”