Kaylee Anderson gets into swing of softball season 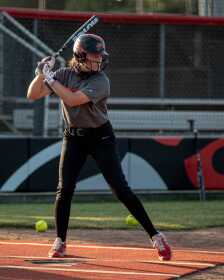 Junior Kaylee Anderson during batting practice on Sept. 21 at the softball complex in Cape Girardeau, Missouri.
Photo by Jan Salmon

In the 2019 softball season, then-sophomore Kaylee Anderson expanded her role in hitting, making 32 starts as designated hitter. Anderson posted a .246 batting average, tallying a home run, triple and eight doubles while scoring 21 runs and posting 19 RBIs. Anderson also had a bigger pitching role in 2019, going 5-4 with 32 strikeouts and three saves in 27 appearances in the circle.

A four-year starter in high school in Warrenton, Mo., Anderson started playing t-ball at four years old and began playing competitively when she was 10 years old. In high school, Anderson finished with a .420 batting average along with 14 home runs and 94 RBIs. Anderson helped lead Warrenton to two Class 3 state titles before deciding to play collegiately at Southeast.

“I chose to play at SEMO because they had my degree — I wanted to study speech pathology,” Anderson said. “Also because I loved my visit; Coach Redburn made it seem so welcoming, and I thought it was the best fit for me.”

The relationships between Anderson and her coaches and teammates are an important part of her softball career at SEMO. Playing for Coach Mark Redburn for the fourth year, she has learned how he works and what he expects. The team spends a large amount of time together between lifting and practicing, and they grow to be like a family and respect each other as players.

In 2019, Anderson helped lead the Redhawks to the OVC Championship where they defeated Jacksonville State. It was Southeast’s sixth championship overall and their first since 1999.

“That’s my favorite memory of my time at SEMO,” Anderson said. “Just the feeling of holding the trophy over our heads and sprinting onto the field. Nothing can compare to that adrenaline rush.”

While batting, Anderson tries not to put a lot of pressure on herself; going up to the plate, she is calm and collected. She knows what she is supposed to do, so going up to do it has become second nature.

“It’s a long season, so just being able to prepare mentally for practice and games has really helped me improve my abilities on the field,” Anderson said.

In 2021, Anderson hopes to keep improving on hitting as she will not be pitching this season.

“Hitting can be both the best and worst part about softball,” Anderson said. “.300 is good, but it’s still a failing grade to some people. If I hit .300, that’s the best feeling in the world.”

After the cancellation of the 2020 season, the Redhawks return to play this spring and are hoping to pick up where they left off in 2019, bringing home another OVC Championship.