“The New Normal” brings COVID-19 struggles to the stage 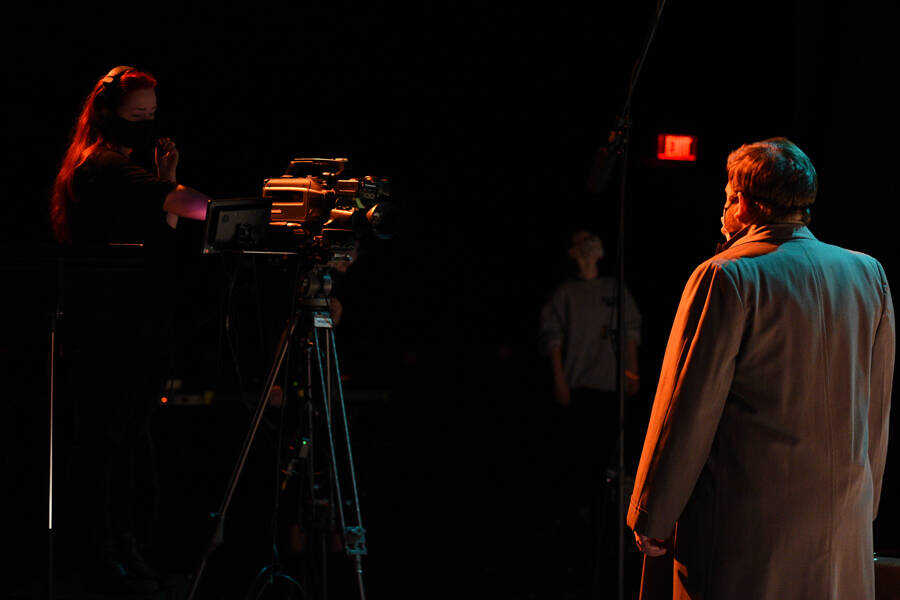 Students involved in "The New Normal" were presented with a new opportunity, the ability to film and edit each other's performances. The production had a three-camera setup and a team on the soundboard.
Photo submitted by Jeff Baustert

The cast and crew of “The New Normal” decided to embrace COVID-19 in their production, instead of letting it take away from the performance.

According to Kitt Lavoie, assistant professor of theatre: acting and directing and director of “The New Normal,” the production team decided they didn’t want to shy away from the challenges COVID-19 presented them, so they incorporated their own problems as the characters’.

“We’ve actually set them all during COVID or during an event like COVID; they obviously never say the word ‘COVID,’” Lavoie said. “But to create a situation where rather than just trying to do a play and putting masks on and keeping people apart, but not letting that be part of the world — we really basically took our problems as creators and made them the characters’ problems. So the characters have to wear masks, the characters have to be distanced from each other.”

The show consists of seven plays with two or three actors in each play. According to Lavoie, the small cast size helped keep rehearsals and filming manageable. Cast and crew also had to go through temperature checks, and the production was in constant contact with the Campus Health Clinic.

The show is streaming now, but students were presented with a unique opportunity during the production of the show: filming and editing. Students from the other plays were able to help film each other and work with Lavoie on the final product.

“For me personally, it was my first time doing any kind of camera work and getting to learn the different terminology between doing stage work, to doing film work,” Alfonso Valdespino, BFA musical theatre major and Bennet in the play “Anyway,” said. “We got to run everything multiple times, instead of just doing a live audience. It was just a whole new experience.”

Due to the size of the cast, “The New Normal” replaced “Metamorphoses.” Lavoie and the production team felt “Metamorphoses” wouldn’t be the best to perform during COVID-19. According to Lavoie, when choosing a new production, they wanted to make sure the cast for “Metamorphoses” could still be included in the new show, which helped in their decision for the number of short plays to include.

Tickets for “The New Normal” can be bought at rivercampus.org. The show streams until Sunday, Nov. 15.