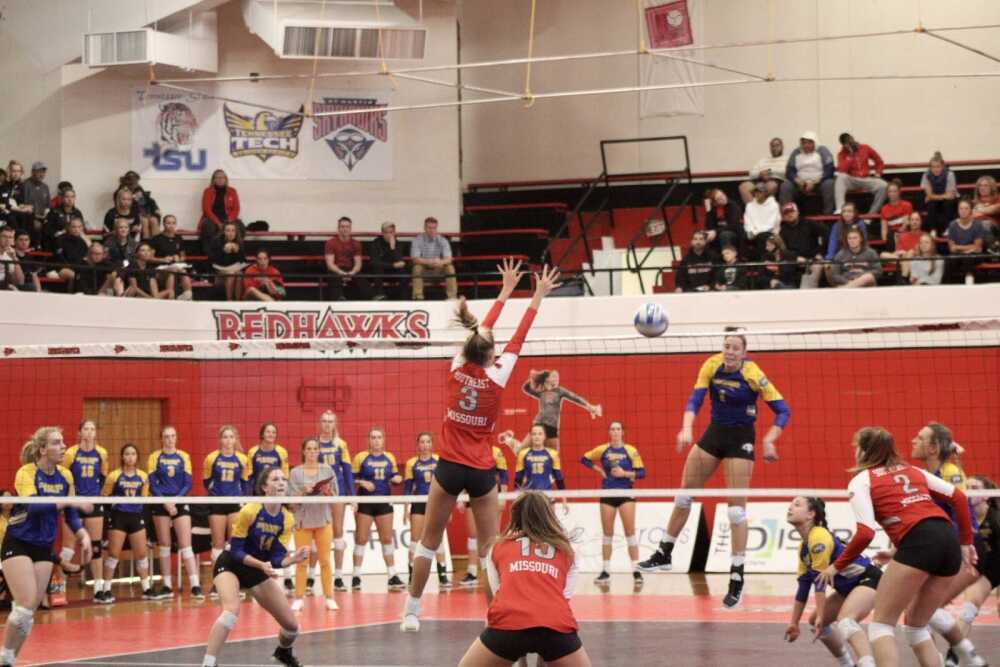 Maggie Adams (#3) goes up for a block during a three-set win on Oct. 18, 2019 vs Morehead State at Houck Field House in Cape Girardeau, Missouri.
Photo by Ramond Buck

Southeast women's volleyball begins their season Feb. 7, and the expectations for this year's team are high as the Redhawks seek to win the Ohio Valley Conference Championship in consecutive seasons. Senior middle blocker Maggie Adams is returning for her final season with the group as she looks to build off of her First-Team All-OVC selection from last year.

Adams has garnered a number of honors throughout her career. She’s been on the OVC Commissioner’s Honor Roll every season, claimed two OVC Defensive Player of the Week awards and was named to the Memphis Beale Street Challenge All-Tournament Team.

Adams led the team with 130 total blocks in 2019 while also ranking third in SEMO single-season history for block assists with 107. She has balanced numbers on the offensive side of the spectrum, as well, posting a .340 hitting percentage, which ranks third in a single season for Southeast.

Adams said the team aspect of volleyball is one reason she loves the sport.

“With volleyball, I love how it’s so team-oriented. It was high-paced, it was intense and I fell in love with blocking,” Adams said.

This will be Adams’ fourth season with the Redhawks, making her one of two players who have played all four of their years with the team, the other being returning senior Ally Dion.

Adams said she didn’t look at any schools other than Southeast after her first visit.

“My first visit, I fell in love with the team,” Adams said. “Coach Yankus has been amazing all four of my years here, and I think she made a big difference in me choosing SEMO. What’s different about Southeast is that we all look out for each other on the team, we’re all good friends and we have a really close-knit community that supports each other.”

The Redhawks fell short in the first round of the NCAA Tournament last season when they took on the Kentucky Wildcats and lost in three sets. Adams totaled five kills in that matchup.

Adams believes the upcoming season will be dictated by how much work the Redhawks put in on and off of the court.

Adams said the Redhawks not only want to finish first in their conference this season, but they also want to defend their OVC championship.

Adams and the Redhawks are set to defend their OVC tournament title beginning Sunday, Feb. 7, against SIUE in Cape Girardeau.