Balanced effort leads Southeast to first win of the season 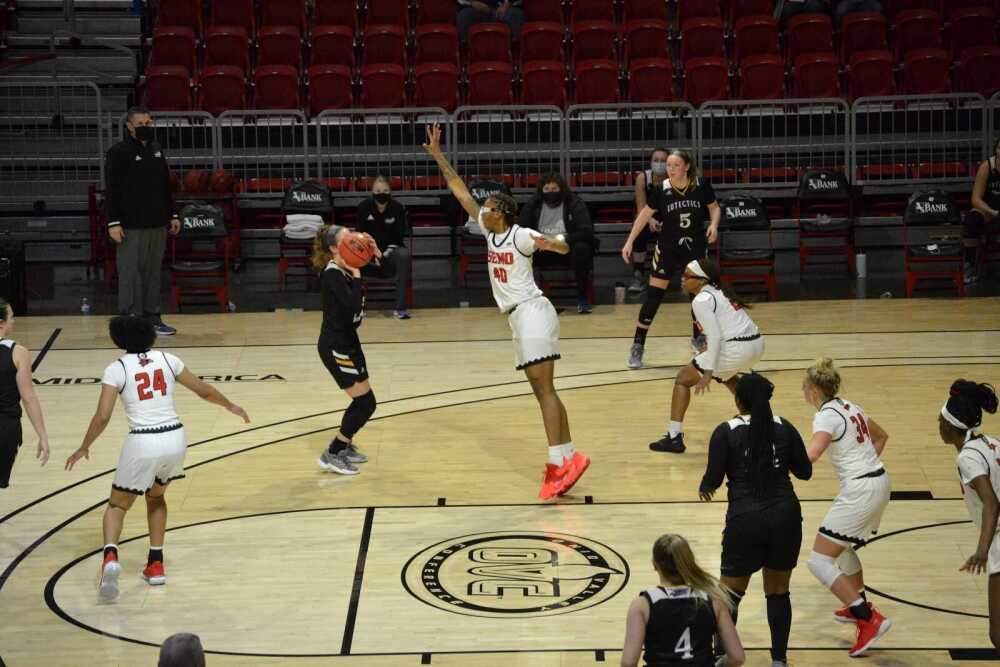 Redshirt-senior forward Latrese Saine contests a shot during the Redhawks 75-44 win on Dec. 1 against UHSP at the Show Me Center in Cape Girardeau.
Photo by Clay Herrell

The Southeast women’s basketball team picked up their first win of the season by defeating the University of Health Sciences and Pharmacy Eutectics 75-44 on Dec. 1 at the Show Me Center in Cape Girardeau.

Prior to tip-off, members of the 2019 Southeast team were presented their rings for winning the Ohio Valley Conference Tournament Championship on March 7 against UT Martin.

Southeast coach Rekha Patterson said this ring is all about the players.

“They put in all the time in the gym, they ran the floor, they got the rebounds, they took the losses and learned from it,” Patterson said. “This was for our players, this was for the university and the community and so I’m just really really happy tonight because it was a special night.”

The Redhawks controlled the game from the start as they jumped out to a 10-0 lead to start the game.

The Redhawks were led by senior guard Tesia Thompson as she posted 18 points on 9-for-14 shooting.

Patterson was pleased with the balanced attack and she said the Redhawks will need to continue the scoring to have success.

“It has to because we will be very easy to scout and defend if everyone is so focused on [Tesia],” Patterson said. “We need for them to do what they’re capable of doing so that all the attention is not on Tesia.”

The Eutectics were led by sophomore guard Grace Beyer who scored 29 points on 9-for-23 shooting including 4-for-8 from behind the three-point line.

Defensively the Redhawks forced 19 turnovers and scored 29 points off those turnovers as well as out rebounding the Eutectics 45-22.

Patterson said it’s important for her team to be active on the defensive end.

A takeaway that will be a point of focus heading into the game vs Eastern Michigan will be talking more on the defensive end. Patterson said she emphasized that pregame but wasn’t happy with the execution.

“I think our players will get better,” Patterson said. “They showed today that they can listen in timeouts and go out and do what we asked them to do.”

The Redhawks are back in action on Sunday, Dec. 6 at 2 p.m. against Eastern Michigan at the Show Me Center in Cape Girardeau.