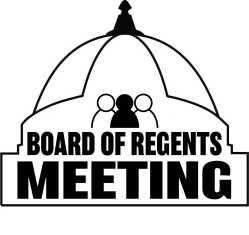 The Board of Regents discussed a range of topics in their Dec. 18 meeting, including allegations of sexual assault, the deletion and prioritization of certain academic programs, the university budget, the COVID-19 vaccine and the process of adapting to technological challenges.

President Carlos Vargas focused his report on the matter of sexual assault on campus.

“This is an issue that we’re going to work very intensely on,” Vargas said. “We’re ready to listen and to learn.”

He said the university would continue to work to ensure they avoid “display[ing] any kind of unfairness” when it comes to claims of sexual assault.

The president said he welcomes any help going forward, from Student Representative to the Board of Regents Lauren Kohn.

Kohn said she had spoken to students about the issue, and one of the key things she heard were ideas on consent training.

The idea was not only about having more training for students and faculty, she said, but also training “student advocates” who would be able to listen to their fellow students and be able to relate on a peer level, as opposed to going to a faculty member to speak.

Faculty Chair Diane Wood spoke on the subject as a survivor of sexual assault. She said a cultural change needs to happen in order to address the issue.

“The men need to start talking to the boys,” she said. “The majority of you are men that are sitting in this room. You can play a massively important part in all of this.”

The way to create a significant change, Wood said, was to not “take a defensive pose.” Rather, she said it is an opportunity for self-reflection.

President of the Student Government Association Logan Phillips said he spoke with Vargas about the improvement of education on sexual assault.

“I think the best thing that we could do for students is peer-to-peer education and students teaching other students,” Phillips said.

He said he recalled the “only real education” he had on the topic was a software program called “MyStudentBody.” Phillips said many students he had spoken to saw the program as a “roadblock” to be gotten through as quickly as possible.

The Board also discussed the different planned phases of vaccination by the CDC and when faculty, staff and students would receive the vaccine in the plan.

Vargas said he was under the understanding higher education personnel would be in Phase 1B with other essential workers.

The CDC’s outline of vaccine distribution lists the “education sector” in 1B, this essential worker section.

“It will be a process and not an event,” Limbaugh said.

The budget factored in a 20% decrease in state funds. However, state revenue ended up being stronger than expected, with only a 9% decrease, which “will produce about a 4.1 million dollar swing to the good for the university” if it holds, Sheriff said.

Both the university’s planning and outside factors have contributed to the positive outcome of the budget, Sheriff said.

“There are a lot of things that have happened with timing behind the scenes,” he said, which would not necessarily show up in the sort of report he presented to the Board of Regents.

Some factors that have played into the additional funds have been the intentionality of how the university budgets with personnel, Sheriff said.

“It’s certainly very, very encouraging,” Sheriff said. “But I think we are well-served to take that with a grain of salt.”

With the pandemic producing challenges of virtual learning, Assistant Vice President of Information Technology Floyd Davenport said he and his department have been working to understand what worked and what did not during the past two semesters since the onset of COVID-19 during the Spring 2020 semester.

He said they have been discussing how to institutionalize technologies in the classroom, as well as training and equipping faculty.

“It happened so rapidly,” Davenport said. “I think there were many people who felt like they were jumping out of an airplane, and they’d never seen a parachute before.”

He said he commended faculty and staff for implementing technology so quickly with the changes brought on by the pandemic.

“There’s a lot of good that came out of this, as well,” he said with regards to the practices of using technology to engage students.

The situation built new skill sets, Davenport said, and now is the time to ask what educators want to carry forward.

View the full Board of Regents meeting here. View the meeting materials here.