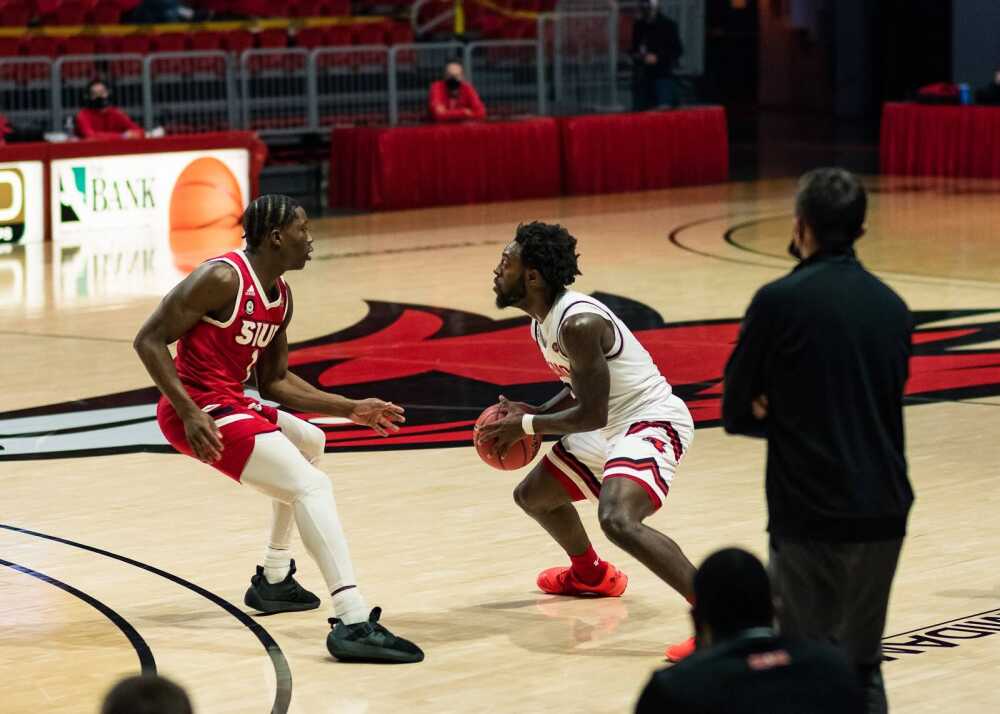 Junior guard Nana Akenten jab steps his defender during Southeast’s 64-62 win over SIUE on Jan. 28 at the Show Me Center in Cape Girardeau.
Photo by Anna Estes

A pair of last-second free throws from junior guard Eric Reed Jr. was the difference in Southeast's 64-62 win over the SIUE Cougars at the Show Me Center on Jan. 28.

Following a turnover by Cougars junior guard Cam Williams, sophomore guard DQ Nicholas buried a three to tie the game at 62 with 16 seconds to play in regulation.

Southeast coach Brad Korn had high praise for Nicholas and the look he got to tie the game.

After forcing a turnover defensively, the Redhawks found Reed running in transition where he was fouled by Cougars senior guard Mike Adewunmi to set up the game-winning free throws.

Korn said he considered calling a timeout after Reed made the first free throw, but ultimately decided he wanted the clock to start as fast as possible.

“After he had made the first one, I was thinking about calling timeout and telling him to miss the second one, just because we have .5 seconds left,” Korn said. “You don't want to give them a chance to set a play.”

The Cougars were led by junior forward Sidney Wilson who scored six of the first seven points for SIUE and had 18 points in the first half. Wilson finished with 23 points on 9-for-15 shooting and knocked down one three-pointer.

After trailing SIUE up until the final seconds of the game, Korn said a big reason Southeast struggled in the first half was because they did not play the right way and didn’t take the right shots.

“There were about four or five possessions that we applied really good defense, and they would make a tough shot,” Korn said. “Just like if we move the ball offensively and take a shot and miss, I’ll live with that, but when we get in transition, and the guys were running on the wings and we take an off-balance three, that’s just not a good shot for us.”

Offensively, the Redhawks distributed the ball evenly as Nana Akenten had 10 points, with nine points coming from the three-point line. Nolan Taylor followed behind with nine points of his own. Dylan Branson, Eric Reed and DQ Nicholas each had eight points, as well, leading to an evenly-spread offensive performance.

The Redhawks will look to build on this win as they welcome the Eastern Illinois Panthers to the Show Me Center on Saturday, Jan. 30, at 5 p.m.