Redhawks use big second half to beat Tennessee Tech 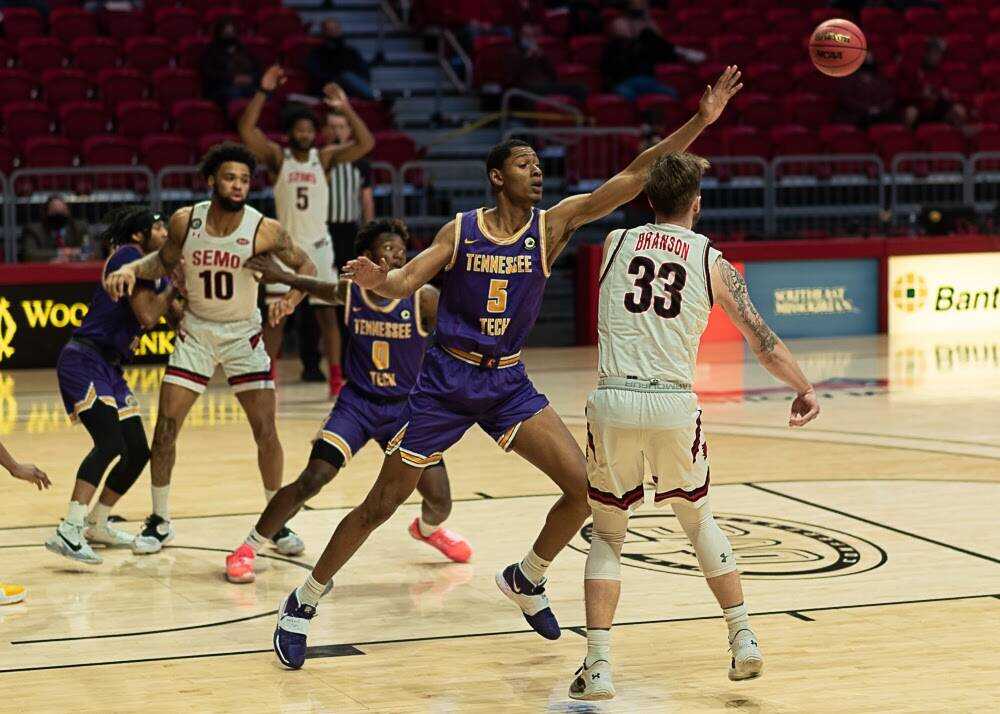 Freshman forward Dylan Branson passes the ball during Southeast's 68-64 win over Tennessee Tech on Feb. 4 at the Show Me Center in Cape Girardeau.
Photo by Anna Estes

A pair of free throws with under a second to play in regulation by Southeast redshirt-sophomore Jordan Love capped off a 16-point, 68-64 comeback win for the Redhawks over Tennessee Tech on Feb. 4 at the Show Me Center in Cape Girardeau.

Southeast coach Brad Korn said the team settled down at the half, made adjustments, and simply executed better in the second half.

“I think we just settled down, we stopped dribbling, and we were able to execute better because we just weren't constantly dribbling,” Korn said. “[Everyone] was in spots that we’re supposed to be in, so now everything just slows down for you mentally as well when you play that way.”

Redhawks senior forward Manny Patterson led the way offensively with 22 points on 10-for-14 shooting. Patterson also hauled in six rebounds and had a key block in the second half.

Patterson said Southeast came out in the second half with a chip on their shoulder.

“We all knew what we had to do at the end of the day,” Patterson said. “We had to pick up our energy and our intensity.”

The Golden Eagles were led by junior guard Damaria Franklin who posted 14 points on 5-for-7 shooting. Franklin had 13 of his 14 points in the first half of action.

Korn said the Redhawks made a few adjustments on the way they guarded Franklin at halftime, but the team also changed their mental approach.

“We changed ball screen coverage a little bit,” Korn said. “We were constantly adjusting and messing with it out of timeouts, from possession to possession, and from player to player really.”

Junior guard Nana Akenten tweaked his ankle, an issue that was bothering him before the game.

“He was a little bit limited in practice, that’s why he didn’t start,” Korn said. “We’re going to be pretty banged up just like everybody else.”

Akenten finished the game with five points and two assists.

Jordan Love finished the game with 14 points on 3-for-6 shooting and Korn said Love was big for the Redhawks down the stretch.

Korn had high praise for the growth he’s seen from his team so far this season.

“We’re becoming what we can be,” Korn said. “I think we’re a long way from where we’re going to be and I’m proud of where we’re at.”

The win moved the Redhawks to 7-11 overall and 5-7 in the Ohio Valley Conference. Southeast will be back in action on Feb. 6 when they host Jacksonville State at the Show Me Center in Cape Girardeau.