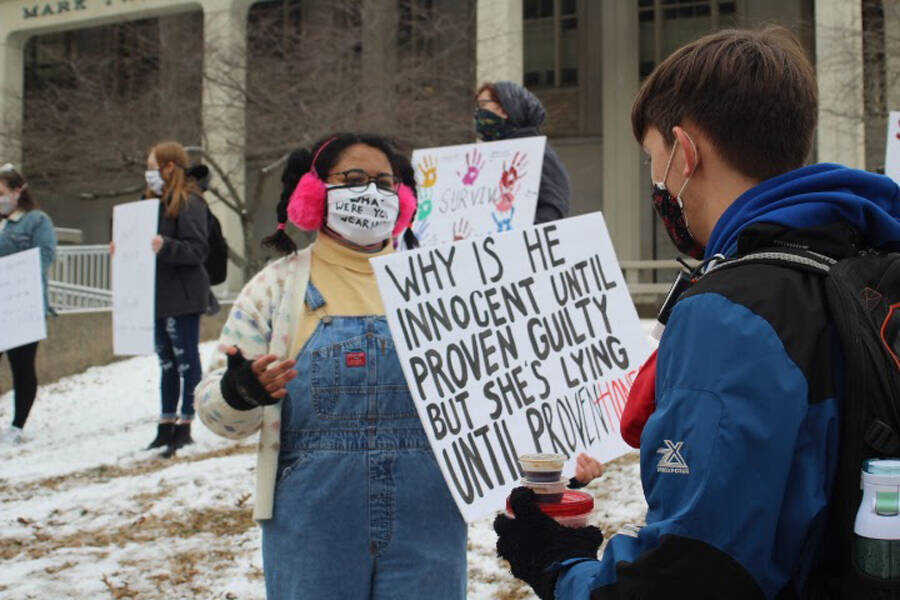 Protest organizer Mahala Pittman discusses the message on her sign with a passerby during a protest Monday against the university’s sexual assault policies. Participants called for Vargas to take actions outlined in a Dec. 16 press release.
Photo by Nicolette Baker

Students and alumni held signs with phrases such as “SEMO athletes: u see it, u hear it.” and “Expose your teammates,” in hopes of sending a message to the university community during a silent protest in front of Kent Library on Monday.

They were gathered to protest the university’s policies regarding sexual assault.

“We thought a silent protest would be perfect to show that we don’t feel like our voices are getting heard,” alum Jessica Strunk said. “By President Vargas not making us a priority, I don’t feel like we’re really being heard or listened to.”

Strunk, who helped organize Monday’s protest, said she is close friends with one of the sexual assault survivors who shared her story on Facebook in December. Following several posts by students on the Facebook group Living at Southeast, President Carlos Vargas sent an email to the Southeast community on Dec. 16 outlining projected changes at Southeast.

In the letter, Vargas outlines steps such as meeting with Redhawks Rising, reviewing university materials pertaining to sexual assault and meeting with departments on campus.

“I understand it is our responsibility to provide a healthy and safe environment, and we will continue to work hard to do so,” he states in the press release.

Organizers say Vargas has not kept his promises.

A Feb. 5 press release from protest organizers stated “President Vargas, as a response, promised an array of actions, none of which have been taken almost two months later.” It states the university president failed to meet with student organization Redhawks Rising, which organizer Mahala Pittman said was the catalyst for Monday’s protest.

After the group circulated information about the protest, Strunk said the President’s office contacted Redhawks Rising and RASA on Monday morning to schedule meetings in the afternoon.

Alum Mel Dow said they attended Monday’s protest to support survivors and set an example for their children.

“I have two sons,” Dow said. “I want them to be productive members of society, to stand up for girls and women.”

Ultimately, Pittman said the group intended the protest to show support for survivors on campus.

“[It’s about] having survivors feel supported by their school, because I think that’s the really big issue, as well,” Pittman said. “It hurts me to think about how many cases go unreported because students see how sexual assault cases are handled on campus.”

An online petition on Change.org titled, “Hold SEMO Accountable,” called for Southeast to further address sexual assault on campus. Launched in December 2020, it has gathered more than 6,500 signatures as of Feb. 8.

Resources are available to those who have been impacted by sexual violence. The Counseling Clinic at Southeast has launched a support group for survivors of sexual violence. To join the group or to access more support, email tcscully@semo.edu.