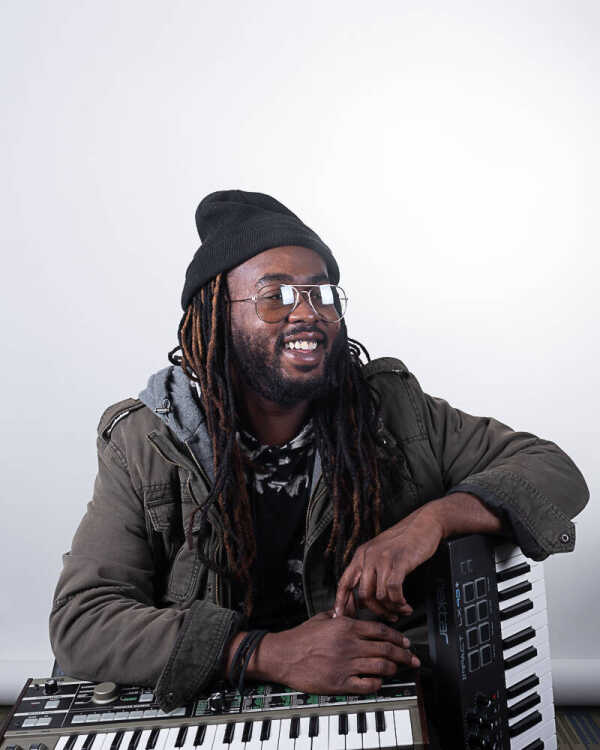 In June 2017, Mark McCutchen stood at a street corner in New Orleans with his wife Philippa, posing to recreate his parents’ honeymoon photo from decades prior.

While vacationing with his wife in the city dubbed “The Birthplace of Jazz,” McCutchen was invited on stage at B.B. King’s Blues Club to play piano with the All-Star Band. The moment was unforgettable, McCutchen said. After performing a piano solo during the band’s last song of the set, he was invited to return to the All-Stars the next night. It’s the same club where his father, Darvell Samuel, performed on drums.

The musician said he feels like he follows in his father’s footsteps.

“I think that’s really what jump-started the creativity in me now to create different vibes of music,” McCutchen said. “That experience alone pushed me.”

McCutchen, 33, works as a shuttle driver at Southeast. The Carbondale, Ill., native currently plays piano, organ, drums and bass in his free time. While he first picked up an instrument at the age of five, he said playing at B.B. King’s club was the catalyst for finding his true passion in music.

His father, a jazz musician himself, encouraged McCutchen from an early age. In grade school, McCutchen said he practiced around two hours each day. He first learned to play music in church; while he now plays more jazz and less gospel, he said his faith in God is still central to everything he does.

Now, he dedicates 30 minutes to an hour each day to his craft. No matter how busy life gets, the shuttle driver said music is an essential part of his schedule.

“It’s a lifeline; I feel like I’m sinking if I don’t practice,” McCutchen said. He said he’s now grown to appreciate the importance of music in his life.

McCutchen cites Thelonious Monk, Robert Glasper and Ben Tankard as inspirations. He describes his music as something to “make you feel good” and said it’s similar to elevator music when asked about the sound. He said he can’t forget mentioning his father — described by McCutchen as the best jazz drummer in Southern Illinois — as one of the biggest influences in his work.

He recalls a saying by his father: “Let the space do the work.” McCutchen explained that when creating music, it’s important to be sensitive to the relationship between sound and silence. Sometimes, he said, silence can be powerful when balanced carefully between the musical notes.

His dad has now retired from music and works as an associate preacher at March of Faith Community Church in Carbondale, Ill. McCutchen and his father still discuss their nights with the All-Star Band.